Wicca for the Beginner 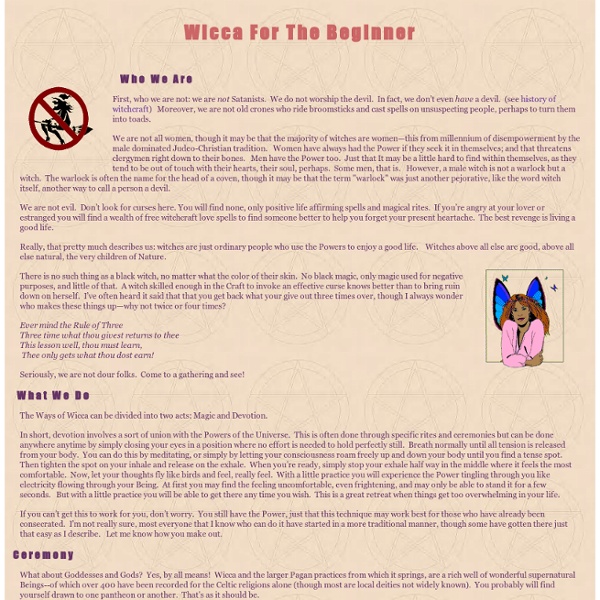 First, who we are not: we are not Satanists. We do not worship the devil. In fact, we don’t even have a devil. (see history of witchcraft) Moreover, we are not old crones who ride broomsticks and cast spells on unsuspecting people, perhaps to turn them into toads. We are not all women, though it may be that the majority of witches are women—this from millennium of disempowerment by the male dominated Judeo-Christian tradition. We are not evil. Really, that pretty much describes us: witches are just ordinary people who use the Powers to enjoy a good life. There is no such thing as a black witch, no matter what the color of their skin. Ever mind the Rule of Three Three time what thou givest returns to thee This lesson well, thou must learn, Thee only gets what thou dost earn! Seriously, we are not dour folks. The Ways of Wicca can be divided into two acts: Magic and Devotion. In short, devotion involves a sort of union with the Powers of the Universe. What about Goddesses and Gods? Reni

Freemasonry Freemasonry is a fraternal organisation that traces its origins to the local fraternities of stonemasons, which from the end of the fourteenth century regulated the qualifications of masons and their interaction with authorities and clients. The degrees of freemasonry, its gradal system, retain the three grades of medieval craft guilds, those of Apprentice, journeyman or fellow (now called Fellowcraft), and Master Mason. These are the degrees offered by craft, or blue lodge Freemasonry. There are additional degrees, which vary with locality and jurisdiction, and are now administered by different bodies than the craft degrees. The basic, local organisational unit of Freemasonry is the lodge. The lodges are usually supervised and governed at the regional level (usually coterminous with either a state, province, or national border) by a Grand Lodge or Grand Orient. Masonic Lodge Palazzo Roffia, Lodge in Italy set out for French (Moderns) ritual Ritual and symbolism Organisations of lodges

Free Witchcraft Downloads: ebooks, pictures, movies Read Dr Ruickbie on witchcraft and magic in Paranormal magazine. What is Witchcraft? That's what this website is here to find out. Witchology.com is the website of WICA - the Witchcraft Information Centre and Archive - founded in 1999 by Dr Leo Ruickbie as a research and education provider specialising in the areas of Witchcraft, Wicca, Paganism, Magic (Magick) and the Occult. WICA Recommended by: You'll get quite an education. From Witchology.com Visitors: This is my first chance to see the new site...and i love it...thanks for all your hard work. About Leo Ruickbie's Books: Get Involved with WICA: Want to investigate magic (Magick), review a grimoire, or write for this website? Other Opportunities at WICA: Want to make some money? Free Witchcraft Newsletter: Plus special offers, secret events and a free gift! Spread the Word about WICA: Search Witchology: Witchcraft to Go: Odin's Eye Click here for more designs Download some witchcraft into your life. Free Witchcraft Downloads by Project Notice

Welcome to The Church and School of Wicca's Homepage! Book of Shadows This Book of Shadows was found at #WICCAN WAY listed as 'Public Domain'. Most of the material contained here is from ourbooks EIGHT SABBATS FOR WITCHES, WITCHES WAY (Also published as THE WITCHES BIBLE), and several other of our works, although some of it is also from other published sources, and 'traditional'. We've 'reclaimed' the bits which are ours and added to it to our own Web Pages - after all, we did publish most of it in our books! We're therefore not breaking any 'craft secrets' by placing it on our web pages as all of it can be found on the bookshelves of any Occult Shop or somewhere else on the Internet! We've had several bits of mail from confused individuals regarding the fact that the festival dates seem to be 6 months out! 1.

witch By Doreen Valiente Hear now the words of the witches, The secrets we hid in the night, When dark was our destiny’s pathway, That now we bring forth into the light. Mysterious water and fire, The earth and the wide-ranging air. By hidden quintessence we know them, And will and keep silent and dare. The birth and rebirth of all nature, The passing of winter and spring, We share with the life universal, Rejoice in the magickal ring. Four times in the year the Great Sabbat Returns, And the witches are seen, At Lammas and Candlemass dancing, On May Even and old Hallowe’en. When day-time and night-time are equal, When sun is at greatest and least, The four Lesser Sabbats are summoned, Again witches gather in feast. Thirteen silver moons in a year are, Thirteen is the coven’s array, Thirteen times at esbat make merry, For each golden year and a day. The power was passed down the ages, Each time between woman and man, Each century unto the other, Ere time and the ages began. The Witches' Rune

Pagan Magic: Wicca and Witchcraft Shop - Delivery Worldwide - Articles - Rituals - Performing Wiccan Rituals – A Guide 1. Cleansing Yourself Although cleansing is often considered as a physical action, it' is also important to cleanse yourself on a spiritual level, shaking off any psychic debris. An important part of the cleansing is bathing and anointing your body, but as a ritual calls for a calm peaceful mind then a meditation may also be necessary. 2. When performing a open air ritual, cleansing of the space is not usually necessary, but inside a apartment or home it is needed. The besom does not have to touch the floor, the motion of sweeping combined with visualization will remove any negativity and/or spiritual remnants. Sacred space can be also cleansed by sprinkling salt or combination of protective/purifying herbs over it. 3. Some wiccans define their ritual space by small circle which is formed of different things scattered around in to the shape of a circle: Herbal powder, sand and salt, cords, sticks or visualized energy. 4. Summoning the Goddess or God does not always require a ritual. 5. 6.

What is Wicca? What is Wicca? Wicca. Witchcraft. The Path. The philosophy of the religion (acknowledged as such by the U.S. As Starhawk said in "Spiral Dance ": Our practice arises from a deep, spiritual commitment to the earth, to healing and to linking of magick to political action. Each one of us embodies the divine. Honoring both Goddess and God, we work with female and male images of divinity, always remembering that their essence is a mystery that goes beyond form. In honoring the Goddess and God, we acknowledge the duality that exists in all facets of life. Wicca is an Earth religion -- an accepting, open-minded faith that celebrates diversity and considers us all to be children of the same mother. Next Page Glossary For further reading Get a Rune or Tarot reading, dream interpretation or astrological report

Wiccan traditions Which Witch Are You? There are several different traditions of Wicca. Here are some of the more well-known traditions. You could practice one, none or mix and match as you see fit. If you are not immediately drawn to one, research a couple until you find the one that fits. If you are a practitioner of a tradition not on this list, e-mail Apythia the information, and we will be happy to add it. Alexandrian Tradition: Founded in England during the 1960's, Alex Sanders referred to himself as the "King" of his Witches. Amythystian : Founded in 1968 by Lady Amethyst. Aquarian Tabernacle Church : An American Tradition of Wicca based on English Traditional Wicca, and focused on service to the larger Wiccan and Pagan community through open worship gatherings. Black Forrest Clan: This is Silver RavenWolf's group and is considered Euro-Wiccan, drawing from Silver's German heritage and Pow-Wow and training she received from her Old Guard Wiccan magickal teachers. Next Page