Cognitive biases affecting foresight and anticipatory thinking. List of Cognitive Biases and Heuristics - The Decision Lab. Behavioral science in business: Nudging, debiasing, and managing the irrational mind. Behavioral science has become a hot topic in companies and organizations trying to address the biases that drive day-to-day decisions and actions. 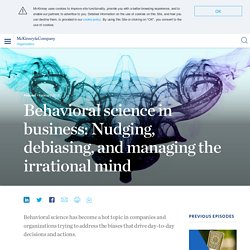 Although humans are known to be irrational, they are at least irrational in predictable ways. Can Your Language Influence Your Spending, Eating, and Smoking Habits? Yes, I know. 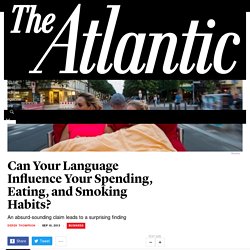 That headline. It looks like the most egregious form of causal inference. Americans don't save money because of ... our grammar? Jacob Silverman. “But today the past is dead, transformed into a packet of well-worn and thumbed glossy images. 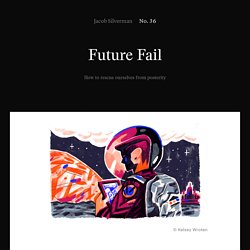 As for the future, which may still be alive in some small heroic collectivities on the Earth’s surface, it is for us either irrelevant or unthinkable.” —Fredric Jameson On a Twitter account called @Shitty_Future, you can find, according to the feed’s anonymous authors, “the future we deserve.” The Cognitive Bias Codex - 180+ biases, designed by John Manoogian III (jm3) - List of cognitive biases - Wikipedia.

Why Uncertainty Makes Us Less Likely to Take Risks. In 2016, solar power became the world’s cheapest form of energy, entering “the era of undercutting fossil fuels,” according to the chairman of Bloomberg New Energy Finance. 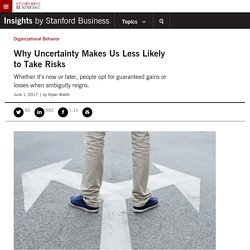 We Aren’t Built to Live in the Moment - NYTimes.com. The brain’s long-term memory has often been compared to an archive, but that’s not its primary purpose. 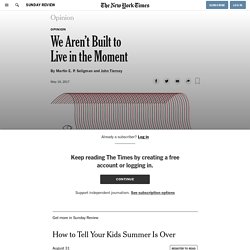 Instead of faithfully recording the past, it keeps rewriting history. A case study in combating bias. Following several disappointing investments, the German electric utility RWE overhauled its decision-making processes. 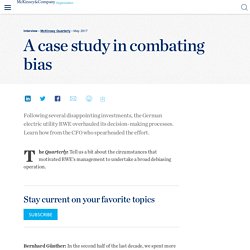 Learn how from the CFO who spearheaded the effort. The Quarterly: Tell us a bit about the circumstances that motivated RWE’s management to undertake a broad debiasing operation. Bernhard Günther: In the second half of the last decade, we spent more than €10 billion on big capital-expenditure programs and acquisitions in conventional power plants. In the business cases underlying these decisions, we were betting on the assumptions of ever-rising commodity prices, ever-rising power prices. We were not alone in our industry in hitting a kind of investment peak at that time. Conventional power generation in continental Europe went through the deepest crisis the industry has ever seen. You're not going to believe what I'm about to tell you. Comics Blog Books Shop Comics: Random Most Popular All Cats Grammar Food Animals Tech This is a comic about the backfire effect.

Inspiration. Cognitive bias cheat sheet – Better Humans. You don’t have to. But you can start by remembering these four giant problems our brains have evolved to deal with over the last few million years (and maybe bookmark this page if you want to occasionally reference it for the exact bias you’re looking for): Information overload sucks, so we aggressively filter. Noise becomes signal.Lack of meaning is confusing, so we fill in the gaps. Signal becomes a story.Need to act fast lest we lose our chance, so we jump to conclusions. Stories become decisions.This isn’t getting easier, so we try to remember the important bits. Why people are so bad at thinking about the future. Photo illustration by Slate. 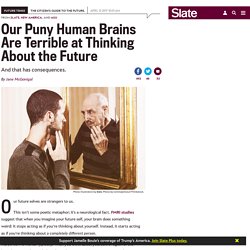 Photo by tommasolizzul/Thinkstock. Our future selves are strangers to us. This isn’t some poetic metaphor; it’s a neurological fact. FMRI studies suggest that when you imagine your future self, your brain does something weird: It stops acting as if you’re thinking about yourself. Instead, it starts acting as if you’re thinking about a completely different person. What Scammers and Fraudsters Can Teach You About Selling. How Syfy is Leading The Charge With Imagining Diverse Futures. When does the future begin? A study in maximising motivation. The answer to the question ‘When does the future begin?’ 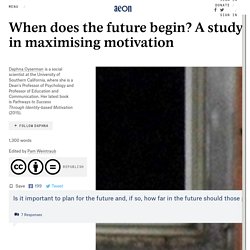 – which, by the way, is not right now – matters because humans are attuned to focus on the ‘right now’ situation. This is not a flaw. Failure to focus on the opportunities and obstacles in the moment can be dangerous. From an evolutionary perspective, humans around today all descended from ancestors who paid attention in the moment, and hence, didn’t become meals for any predator straying into their path while pondering future goals.

Foresight as a measure of fluency, creativity, and "future thinking." Rex E. 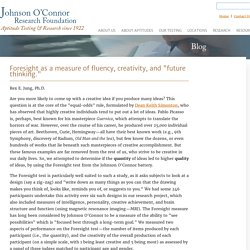 Jung, Ph.D. Are you more likely to come up with a creative idea if you produce many ideas? This question is at the core of the "equal-odds" rule, formulated by Dean Keith Simonton, who has observed that highly creative individuals tend to put out a lot of ideas. Capital - Positive thinking can make you too lazy to meet your goals. About fifteen years ago, when entrepreneur Michael Stausholm started a business with a friend, his partner painted a rosy picture of the future of the business and promised him a lot of success.

Stausholm believed him and felt uplifted, as if saying it would will it to be so. Thinking positive, after all, is a common step to success, right? Forecasting the Future: Can The Hive Mind Let Us Predict the Future? Polling The (Chat)Room If two minds are better than one, how much better are two thousand minds? A new hive mind project known as Metaculus is attempting to find out. Essentially the crowdsourcing of knowledge, the concept of “hive mind,” or collective intelligence, has been explored within the context of such fields as biology, robotics, and political science. Now, through their online community Metaculus, physicists Anthony Aguirre (University of California), Gregory Laughlin (Yale), and former postdoc Max Wainwright are testing the accuracy of hive mind in making predictions about the future of such fields as science, technology, and space.

So, how can humans help predict the future? Why Can’t You Remember Your Future? Physicist Paul Davies on the Puzzlement of Why We Experience Time as Linear. How Our Minds Mislead Us: The Marvels and Flaws of Our Intuition. 20 Cognitive Biases That Affect Your Decisions. Why feeling like a fraud can be a good thing. Image copyright iStock. Luck Is a Bigger Contributor to Success Than People Give It Credit For. Surfing Uncertainty: Do our dynamic brains predict the world? Future - The enormous power of the unconscious brain. Foxes make good economic forecasts but hedgehogs can be helpful.

What Negative Thinking Does to Your Brain.

The Science of Mental Time Travel and Why Our Ability to Imagine the Future Is Essential to Our Humanity. Tom Vanderbilt Explains Why We Could Predict Self-Driving Cars, But Not Women in the Workplace. Welcome to Forbes. You Are Not Strengths-Based, Even When You Think You Are. Overcoming obstacles to effective scenario planning. When scenario planning has worked well, it has proved enormously useful to a wide range of organizations as a tool for making decisions under uncertainty.

First popularized by Shell in the early 1970s, the approach should be a natural complement to other ways of developing strategy—especially when executives are as concerned about geopolitical dynamics as many are today. Why do we assume the future will be short? – John Schellenberg. 10 Big Mistakes People Make in Thinking About the Future.