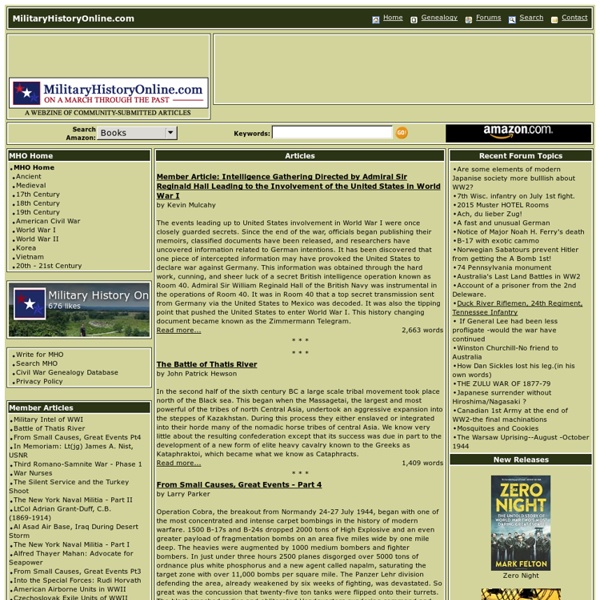 Military History Monthly Home - Vietnam Full DisclosureVietnam Full Disclosure | Vietnam Full Disclosure: Toward an Honest Commemoration of the American War in Vietnam Military history Military history is a humanities discipline within the scope of general historical recording of armed conflict in the history of humanity, and its impact on the societies, their cultures, economies and changing intra and international relationships. Professional historians normally focus on military affairs that had a major impact on the societies involved as well as the aftermath of conflicts, while amateur historians and hobbyists often take a larger interest in the details of battles, equipment and uniforms in use. The essential subjects of military history study are the causes of war, the social and cultural foundations, military doctrine on each side, the logistics, leadership, technology, strategy, and tactics used, and how these changed over time. Whereas Just War Theory explores the moral dimensions of warfare, and to better limit the destructive reality caused by war, seeks to establish a doctrine of military ethics. Historiography of military history[edit] Early historians[edit]

The Mysterious Package One of the more obscure pieces of evidence in the Kennedy assassination is the package mailed to Lee Oswald shortly before the assassination from Irving, Texas. There are two things wrong with it. One, the street address is wrong and two, there was insufficient postage. There was no return address either. Discovered in the dead letter department of the Irving, Texas post office two weeks after the assassination, it was a package Oswald never saw or most likely never knew had been mailed to him. The framing of the guilty man? The Package ContentsThe package was discovered by C. The package was opened by Dallas Postmaster Harry Holmes, a controversial figure in the course of the investigation. So here we have a second paper bag. The Postage Due CardAs if all of this were not strange enough, on November 23, a post due card arrives at Ruth Paine’s address at 2515 W. 5th Street in Irving. So if you don’t want to believe in a conspiracy to kill John F. assassination

War "Conflict zone" redirects here. For the 2001 video game, see Conflict Zone. The War by Tadeusz Cyprian (1949), a photograph in the collection of the National Museum in Warsaw showing ruins of Warsaw's Napoleon Square in the aftermath of World War II. War is a state of armed conflict between societies. While some scholars see war as a universal and ancestral aspect of human nature,[1] others argue that it is only a result of specific socio-cultural or ecological circumstances.[2] In 2013 war resulted in 31,000 deaths down from 72,000 deaths in 1990.[3] The deadliest war in history, in terms of the cumulative number of deaths since its start, is the Second World War, from 1939 to 1945, with 60–85 million deaths, followed by the Mongol conquests[4] which was greater than 41 million.[5] Proportionally speaking, the most destructive war in modern history is the War of the Triple Alliance, which took the lives of over 60% of Paraguay's population, according to Steven Pinker. Etymology Types Aims