You're not going to believe what I'm about to tell you. Comics Blog Books Shop Comics: Random Most Popular All Cats Grammar Food Animals Tech This is a comic about the backfire effect.

Inspiration This comic was inspired by this three-part series on the backfire effect from the You Are Not So Smart Podcast. USC Creativity and Brain Institute Neural correlates of maintaining one’s political beliefs in the face of counterevidence By Sarah Gimbel and Sam Harris. Other fun reading Reddit - Change My View Wikipedia's list of common misconceptions Sources You Are Not So Smart Website Podcast USC Creativity and Brain institute Wooden teeth Slave teeth Napoleon Thomas Crapper Houseflies Exploding in a vacuum Jesus's birthday The Pledge of Allegiance Roe v. Latest Things Random Comics Home Quizzes About Contact All artwork and content on this site is Copyright © 2016 Matthew Inman. BBC iWonder - Has poetry distorted our view of World War One? Armies 1914. BBC - GCSE Bitesize History - Long-term underlying causes of war : Test. Nationalism as a cause of World War I.

The webserver at Alpha History tells us you’re using an adblocking tool, plug-in or browser extension on your computer or network. 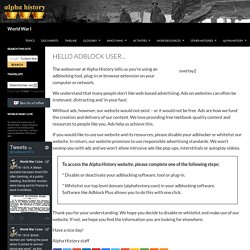 We understand that many people don’t like web-based advertising. Ads on websites can often be irrelevant, distracting and ‘in your face’. Without ads, however, our website would not exist – or it would not be free. Ads are how we fund the creation and delivery of our content. We love providing free textbook-quality content and resources to people like you. If you would like to use our website and its resources, please disable your adblocker or whitelist our website. To access the Alpha History website, please complete one of the following steps: * Disable or deactivate your adblocking software, tool or plug-in. * Whitelist our top level domain (alphahistory.com) in your adblocking software. Thank you for your understanding. Have a nice day! Alpha History staff. Military Buildup - The World at War. Between 1890 and 1913, the European powers at the time began building up in military power. 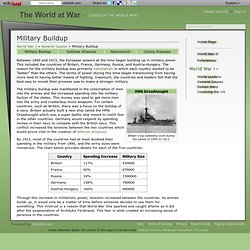 This included the countries of Britain, France, Germany, Russia, and Austria-Hungary. The reason for the military buildup was primarily nationalism in which each country wanted to be "better" than the others. The terms of power during this time began transitioning from having more land to having better means of fighting. Inasmuch, the countries and leaders felt that the best way to reveal their prowess was to make a stronger military. TO WHAT EXTENT WAS NATIONALISM A CAUSE OF WW1. According to Georges Clemenceau (footnote - french prime minister) "A patriot is one who loves his country. 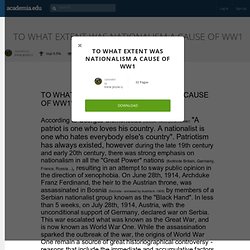 A nationalist is one who hates everybody else's country". Patriotism has always existed, however during the late 19th century and early 20th century, there was strong emphasis on nationalism in all the "Great Power" nations (footnote Britain, Germany, France, Russia...) , resulting in an attempt to sway public opinion in the direction of xenophobia. Rudbeck-IB-History-Revision - 2.1 Causes of the First World War. Past Exam Questions:Paper 2 -Compare and contrast the causes of the First World War and the Second World War (May 2008)Compare and contrast the reasons for Germany’s involvement in the First and Second World Wars (Nov 2007)Examine the part played by each of the following in the outbreak of the First World War: alliances; mobilization; Balkan nationalism. 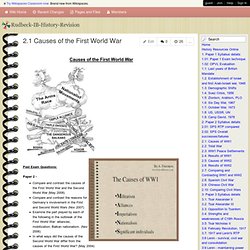 BBC News - World War One: 10 interpretations of who started WW1. Image copyright Alamy As nations gear up to mark 100 years since the start of World War One, academic argument still rages over which country was to blame for the conflict. 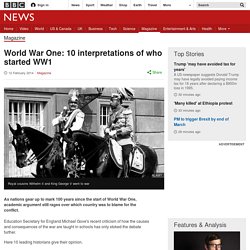 Education Secretary for England Michael Gove's recent criticism of how the causes and consequences of the war are taught in schools has only stoked the debate further. Here 10 leading historians give their opinion. Sir Max Hastings - military historian Germany No one nation deserves all responsibility for the outbreak of war, but Germany seems to me to deserve most. It alone had power to halt the descent to disaster at any time in July 1914 by withdrawing its "blank cheque" which offered support to Austria for its invasion of Serbia. I'm afraid I am unconvinced by the argument that Serbia was a rogue state which deserved its nemesis at Austria's hands.

The question of whether Britain was obliged to join the European conflict which became inevitable by 1 August is almost a separate issue. Serbia Image copyright Getty Images. Art forever changed by World War I - Los Angeles Times. A scene from “All Quiet on the Western Front” from 1930. 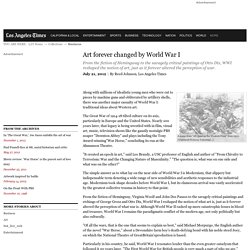 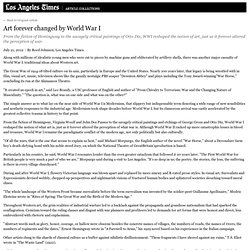 The Great War of 1914-18 tilted culture on its axis, particularly in Europe and the United States. Nearly 100 years later, that legacy is being wrestled with in film, visual art, music, television shows like the gauzily nostalgic PBS soaper "Downton Abbey" and plays including the Tony Award-winning"War Horse," concluding its run at the Ahmanson Theatre. 1 - war-overview.pdf. BBC - iWonder - 37 days: Countdown to World War One.