Can We Reprogram Our DNA and Heal Ourselves With Frequency, Vibration & Energy? Christina Sarich & Dylan Charles | Wakingtimes | March 2014 As though to confirm the hunch many of us had that our ‘junk’ DNA was anything but disposable, researchers from the Gene and Stem Cell Therapy Program at Sydney’s Centenary Institute have proven that 97 percent of human DNA programs or encodes proteins in our bodies. 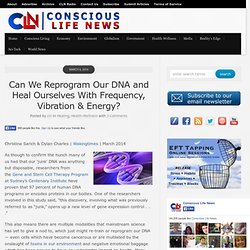 One of the researchers involved in this study said, “this discovery, involving what was previously referred to as “junk,” opens up a new level of gene expression control . . .” This also means there are multiple modalities that mainstream science has yet to give a nod to, which just might re-train or reprogram our DNA — even cells which have become cancerous or are mutilated by the onslaught of toxins in our environment and negative emotional baggage which has been proven to have an undesirable impact on health. Many people have compared human DNA to the Internet. Chaos Theory and DNA The DNA Spectrum: Making Music with Biology Russian linguists, Dr. Plane (esotericism) The concept may be found in religious and esoteric teachings—e.g. 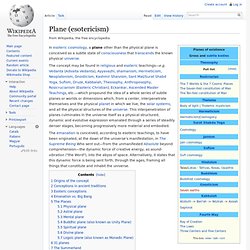 Vedanta (Advaita Vedanta), Ayyavazhi, shamanism, Hermeticism, Neoplatonism, Gnosticism, Kashmir Shaivism, Sant Mat/Surat Shabd Yoga, Sufism, Druze, Kabbalah, Theosophy, Anthroposophy, Rosicrucianism (Esoteric Christian), Eckankar, Ascended Master Teachings, etc. —which propound the idea of a whole series of subtle planes or worlds or dimensions which, from a center, interpenetrate themselves and the physical planet in which we live, the solar systems, and all the physical structures of the universe.

Whatever You Can Imagine Already Exists: Infinite Number of Possible Realities. By Dr. 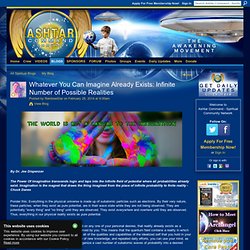 Joe Dispenzav The Power Of Imagination transcends logic and taps into the infinite field of potential where all probabilities already exist. 18 Things Highly Creative People Do Differently. This list has been expanded into the new book, “Wired to Create: Unravelling the Mysteries of the Creative Mind,” by Carolyn Gregoire and Scott Barry Kaufman.

Creativity works in mysterious and often paradoxical ways. Creative thinking is a stable, defining characteristic in some personalities, but it may also change based on situation and context. Inspiration and ideas often arise seemingly out of nowhere and then fail to show up when we most need them, and creative thinking requires complex cognition yet is completely distinct from the thinking process. 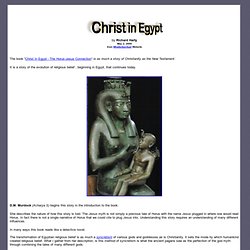 Astrobiology Web. How Incomprehensible Could Extraterrestrials Be? A few days ago Paul Gilster, the author of Centauri Dreams: Imagining and Planning Interstellar Exploration and the curator of Centauri Dreams , posted a thoughtful discussion of a blog entry I wrote (titled What's The Connection Between Deafness and SETI? ) His discussion and the resulting comments were fascinating, and in this post I want to carry on that conversation. I want to ask: Will extraterrestrials be so different from us as to be truly incomprehensible? Esoteric reality. Esoteric reality. Univ. - beginning. Etymology Dictionary. Predicting what extra-terrestrials will be like: and preparing for the worst. 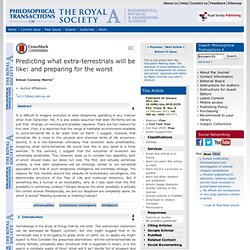 Introduction ‘Astrobiology is the study of things that do not exist.’ This well-known statement can be dismissed as flippant cynicism, but one might suggest that in its vernacular way it is struggling to grasp what on earth (so to speak) we might expect to find. How do fireflies light up. Fireflies or lightning bugs make light within their bodies. 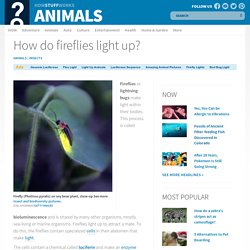 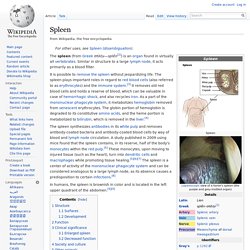 A study published in 2009 using mice found that the spleen contains, in its reserve, half of the body's monocytes within the red pulp.[5] These monocytes, upon moving to injured tissue (such as the heart), turn into dendritic cells and macrophages while promoting tissue healing.[5][6][7] The spleen is a center of activity of the mononuclear phagocyte system and can be considered analogous to a large lymph node, as its absence causes a predisposition to certain infections.[8] In humans, the spleen is brownish in color and is located in the left upper quadrant of the abdomen.[4][9] Structure[edit]

Lucid Dreams. Symbols in books of alchemy. Sources: Wd1426, Wd1421A, Wv149, Ws2541A Wd1426, a book of alchemical recipes, has caused us to add some additional symbols to our inventory of character entities: signs for substances antimony and sal armoniac; the elements fire and water; and the syllabics "subli-" and "precipi-" (found in sublimate, precipitate, etc.). 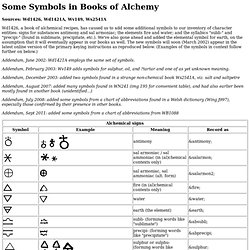 We've also gone ahead and added the elemental symbol for earth, on the assumption that it will eventually appear in our books as well. The new symbols will soon (March 2002) appear in the latest online version of the primary keying instructions as reproduced below. (Examples of the symbols in context follow further on below.) 9-2 (2003): Visualization in Medieval Alchemy. Barbara Obrist* Abstract: This paper explores major trends in visualization of medieval theories of natural and artificial transformation of substances in relation to their philosophical and theological bases. 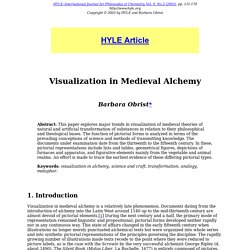 The function of pictorial forms is analyzed in terms of the prevailing conceptions of science and methods of transmitting knowledge. The documents under examination date from the thirteenth to the fifteenth century. George Gordon Byron (Lord Byron) Creative Destruction: Think like a Forest! The phrase “creative destruction” has become a common one as economies and nations struggle to adjust in the aftermath of the Crash of ’08. 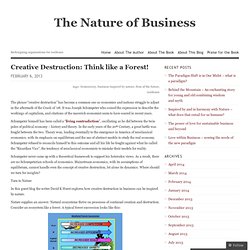 It was Joseph Schumpeter who coined the expression to describe the workings of capitalism, and citations of the maverick economist seem to have soared in recent years. Schumpeter himself has been called a “living contradiction”, oscillating as he did between the twin poles of political economy – history and theory. In the early years of the 20th Century, a great battle was fought between the two. Theory won, leading eventually to the emergence in America of neoclassical economics, with its emphasis on equilibrium and the use of abstract models to study the real economy. Schumpeter refused to reconcile himself to this outcome and all his life he fought against what he called the “Ricardian Vice”, the tendency of neoclassical economists to mistake their models for reality.

Turn to Nature Nature supplies an answer. Hollow Earth Hypothesis - Subterranean Civilizations - Agartha. Hollow Earth Hypothesis As science and science fiction merge, we unravel the ancient mysteries of the human experience. If indeed entities exist beneath the surface of the planet, they would not live in molten rock but in space ships. And as the tectonic plates are breaking - it is either by their doing, a knowing that the consciousness hologram that creates this reality, is ending so they no longer have to monitor from below, or they emerge as the plates naturally break apart. Hollow Earth Theories always propose a central sun, aliens, and mythical subterranean cities and civilizations that some believe could link science and pseudoscience if physically discovered.