Astronomers Discover the Biggest Structure in the Known Universe. A New Find As if staring up at the night sky didn’t make us feel small already, astronomers have recently announced the discovery of the BOSS Great Wall, a group of superclusters that span roughly 1 billion light-years across and represents thelargest structure ever found in space. 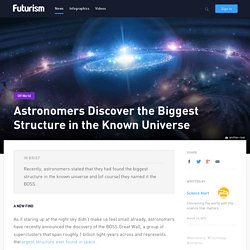 The BOSS Great Wall, which sounds aptly named for its size but actually stands for the Baryon Oscillation Spectroscopic Survey, is a string of superclusters connected by gases lying roughly 4.5 to 6.5 billion light-years away from Earth. Thanks to gravity, these superclusters stay connected and swirl together through the void of space. According to Joshua Sokol at New Scientist, the megastructure discovered by a team from the Canary Islands Institute of Astrophysics is composed of 830 separate galaxies and has a mass 10,000 times greater than the Milky Way. To put the scale of this structure into perspective, we orbit one single star, the Sun. But Does it Really Exist? Kardashev Scale: The Kinds of Alien Civilizations in Our Universe. A Timeline of NASA's Upcoming Space Missions. Kardashev Scale: The Kinds of Alien Civilizations in Our Universe. Most Other Earth-Like Planets Haven't Been Born Yet. In Brief A new theory proposes that Earth is among the first planets to develop life and that most habitable planets in the galaxy have yet to be born. 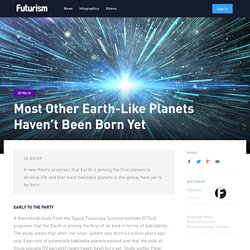 Early to the Party A theoretical study from the Space Telescope Science Institute (STScI) proposes that the Earth is among the first of its kind in terms of habitability. The study states that when our solar system was born 4.6 billion years ago, only 8 percent of potentially habitable planets existed and that the bulk of those planets (92 percent) haven’t even been born yet. Charting the slow death of the universe. An international team of astronomers studying more than 200,000 galaxies has measured the energy generated within a large portion of space more precisely than ever before. 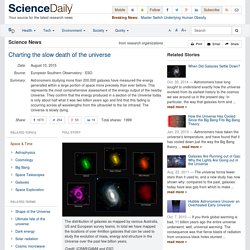 This is how the universe will end: not with a bang but a rip. Russian billionaire, Hawking announce $100 million search for ET. Green Bank Telescope (credit: Geremia/Wikimedia Commons) Russian billionaire Yuri Milner, Stephen Hawking, Martin Rees, Frank Drake and others announced at The Royal Society today $100 million funding for Breakthrough Listen — the “most powerful, comprehensive, and intensive scientific search ever undertaken for signs of intelligent life beyond Earth.” 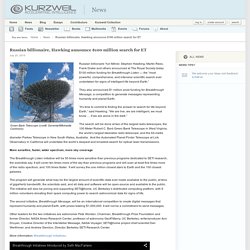 They also announced $1 million prize funding for Breakthrough Message, a competition to generate messages representing humanity and planet Earth. “It’s time to commit to finding the answer to search for life beyond Earth,” said Hawking. “We are live, we are intelligent, we must know … if we are alone in the dark.” The search will be done at two of the largest radio telescopes, the 100 Meter Robert C. More sensitive, faster, wider spectrum, more sky coverage The Breakthrough Listen initiative will be 50 times more sensitive than previous programs dedicated to SETI research, the scientists say. More information: Breakthrough Initiatives. NASA Study Proposes Airships, Cloud Cities for Venus Exploration. Universe is Not Expanding After All, Scientists Say. New evidence, based on detailed measurements of the size and brightness of hundreds of galaxies, indicates that the Universe is not expanding after all, says a team of astrophysicists led by Eric Lerner from Lawrenceville Plasma Physics. 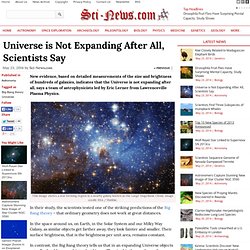 This image shows a star forming region in a nearby galaxy known as the Large Magellanic Cloud. Image credit: ESA / Hubble. Everything We Just Found Out About Pluto, Courtesy of New Horizons - Futurism. Finding faster-than-light particles by weighing them. Stephen Hawking: Questioning the universe. Chronology of the universe. Illustration of evolution of the universe from the Big Bang (left). 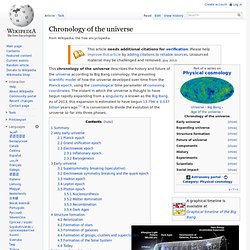 In this diagram, the universe is represented in two dimensions and the third (horizontal) dimension is time, increasing to the right. Summary[edit] The very earliest universe was so hot, or energetic, that initially no particles existed or could exist (except perhaps in the most fleeting sense), and the forces we see around us today were believed to be merged into one unified force. Big Bang, Deflated? Universe May Have Had No Beginning. If a new theory turns out to be true, the universe may not have started with a bang. 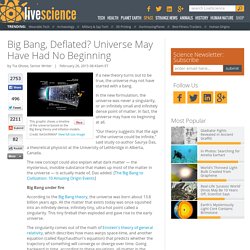 In the new formulation, the universe was never a singularity, or an infinitely small and infinitely dense point of matter. In fact, the universe may have no beginning at all. "Our theory suggests that the age of the universe could be infinite," said study co-author Saurya Das, a theoretical physicist at the University of Lethbridge in Alberta, Canada. A Review of the Universe. An Atlas of The Universe. 10 Mind blowing facts about the Universe. The Milky Way is Much Larger Than Previously Thought - Futurism. Synopsis The Milky Way galaxy is at least 50 percent larger than is commonly estimated, according to new findings that reveal that the galactic disk is contoured into several concentric ripples. 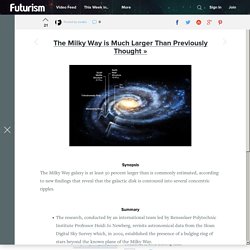 Summary. Supermassive Black Hole at the Center of a Quasar is 12 Billion Times More Massive than the Sun - Futurism. NASA Discovers Hidden Portals In Earth’s Magnetic Field. Our planet has come a long way in scientific breakthroughs and discoveries. 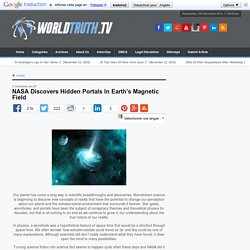 Mainstream science is beginning to discover new concepts of reality that have the potential to change our perception about our planet and the extraterrestrial environment that surrounds it forever. Star gates, wormholes, and portals have been the subject of conspiracy theories and theoretical physics for decades, but that is all coming to an end as we continue to grow in our understanding about the true nature of our reality. In physics, a wormhole was a hypothetical feature of space time that would be a shortcut through space-time.

We often wonder how extraterrestrials could travel so far and this could be one of many explanations. A Universe of 10 Dimensions. Superstring theory posits that the universe exists in 10 dimensions at once. 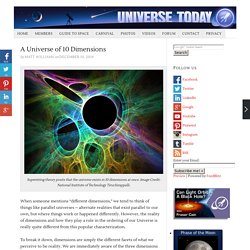 Image Credit: National Institute of Technology Tiruchirappalli. When someone mentions “different dimensions,” we tend to think of things like parallel universes – alternate realities that exist parallel to our own, but where things work or happened differently. However, the reality of dimensions and how they play a role in the ordering of our Universe is really quite different from this popular characterization.

To break it down, dimensions are simply the different facets of what we perceive to be reality. We are immediately aware of the three dimensions that surround us on a daily basis – those that define the length, width, and depth of all objects in our universes (the x, y, and z axes, respectively). Beyond these three visible dimensions, scientists believe that there may many more. Multiverse Proof Possibility From Colliding Universes. Like many of her colleagues, Hiranya Peiris, a cosmologist at University College London, once largely dismissed the notion that our universe might be only one of many in a vast multiverse.

It was scientifically intriguing, she thought, but also fundamentally untestable. She preferred to focus her research on more concrete questions, like how galaxies evolve. Then one summer at the Aspen Center for Physics, Peiris found herself chatting with the Perimeter Institute’s Matt Johnson, who mentioned his interest in developing tools to study the idea. He suggested that they collaborate. Exploring Parallel Universes. Complex organic molecules discovered in infant star system. Artist impression of the protoplanetary disk surrounding the young star MWC 480. ALMA has detected the complex organic molecule methyl cyanide in the outer reaches of the disk in the region where comets are believed to form. This is another indication that complex organic chemistry, and potentially the conditions necessary for life, is universal.

Astrobiology Center. The Columbia Astrobiology Center (NYC-Astrobiology Consortium) The Columbia Astrobiology* Center represents a unique consortium of Columbia University departments, the Goddard Institute for Space Studies (NASA), and the American Museum of Natural History. It is an interdisciplinary effort dedicated to investigating the wide range of phenomena that may participate in the origin and evolution of life on Earth and beyond. We undertake fundamental research in many areas, including: The study and modeling of exoplanets, their characteristics and climates. The study of planet formation and solar system meteoritics and early chemistry.The study of Earth and Martian paleoclimate. Astrobiology Web.

NASA Astrobiology: Life in the Universe. Astrobiology: Life in the Universe. How Did Life Become Complex? A species of yeast (Saccharomyces cerevisiae) seen in a scanning electrograph image. The Stanford Astrobiology Course. Welcome and introduction to website. Why the USA and NASA need astrobiology. I am an astrobiologist, for 50 years an astronomer, and before that a physicist. With my colleague and friend Roger Angel, we started the process of learning how to detect Earth-like planets in 1985. Michio Kaku 3 types of Civilizations.

March towards Type1 Civilization. Toward a Type 1 civilization. Our civilization is fast approaching a tipping point. Humans will need to make the transition from nonrenewable fossil fuels as the primary source of our energy to renewable energy sources that will allow us to flourish into the future. Failure to make that transformation will doom us to the endless political machinations and economic conflicts that have plagued civilization for the last half-millennium. We need new technologies to be sure, but without evolved political and economic systems, we cannot become what we must. And what is that? Extraterrestrial Life. The official U.S. government position on extraterrestrial life and the three major efforts to search for it. Clockwise from top left: The development and testing of hypotheses on extraterrestrial life is known as "exobiology" or "astrobiology", although astrobiology also considers Earth-based life in its astronomical context.

Many scientists consider extraterrestrial life plausible, but there is no direct evidence of its existence.[2] Since the mid-20th century, there has been an ongoing search for signs of extraterrestrial life, from radios used to detect possible extraterrestrial signals, to telescopes used to search for potentially habitable extrasolar planets.[3] It has also played a major role in works of science fiction. NASA's Chief Scientist Predicts Signs of Alien Life Will Be Found by 2025 - Futurism. Synopsis "I think we're going to have strong indications of life beyond Earth within a decade, and I think we're going to have definitive evidence within 20 to 30 years. " Finding Life Beyond Earth. PBS Airdate: October 19, 2011. Finding Life Beyond Earth Collection. Some of the Most Plausible Scenarios for Alien Civilizations.

On the hunt for universal intelligence. The Dominant Life Form in the Cosmos Is Probably Superintelligent Robots. Do Robots Rule the Galaxy? How Self-Replicating Spacecraft Could Take Over the Galaxy. "Human Species May Be Among Early Advanced Life in the Universe" Colonization of the Moon. Future Space-based Habitats. Europe's Next Space Chief Wants a Moon Colony on the Lunar Far Side. Proposed Legislation Would Make Space Settlement a National Goal. Star Trek: The Final Frontier - Federation Map.