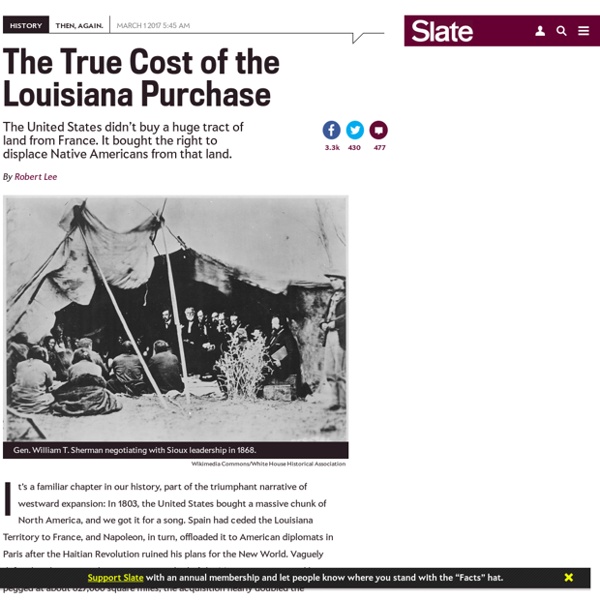 Wikimedia Commons/White House Historical Association It’s a familiar chapter in our history, part of the triumphant narrative of westward expansion: In 1803, the United States bought a massive chunk of North America, and we got it for a song. Spain had ceded the Louisiana Territory to France, and Napoleon, in turn, offloaded it to American diplomats in Paris after the Haitian Revolution ruined his plans for the New World. Vaguely defined at the time as the western watershed of the Mississippi River, and later pegged at about 827,000 square miles, the acquisition nearly doubled the national domain for a mere $15 million, or roughly $309 million in today’s dollars. Divide the area by the price and you get the Louisiana Purchase’s celebrated reputation as one of the greatest real estate bargains in history. Historians have long known that Indians were paid something for their soil rights, but we’ve never been able to say how much. Play the animation Interactive by Andrew Kahn

Related:  First North Americans • What the Hell • US

Native cartography: a bold mapmaking project that challenges Western notions of place ‘More lands have been lost to Native peoples probably through mapping than through physical conflict.’ Maps have been used not only to encroach on Native Americans lands, but to diminish their cultures as well. With every Spanish, French or English placename that eclipses a Native one, a European narrative of place and space becomes further entrenched. Google’s featured snippets are worse than fake news Peter Shulman, an associate history professor at Case Western Reserve University in Ohio, was lecturing on the reemergence of the Ku Klux Klan in the 1920s when a student asked an odd question: Was President Warren Harding a member of the KKK? Shulman was taken aback. He confessed that he was not aware of that allegation, but that Harding had been in favor of anti-lynching legislation, so it seemed unlikely. But then a second student pulled out his phone and announced that yes, Harding had been a Klan member, and so had four other presidents.

How 90% of American Households Lost an Average of $17,000 in Wealth to Plutocrats in 2016 - BillMoyers.com How 90% of American Households Lost an [...] The average 1 percent household took an additional $3 million of our national wealth in one year while education and infrastructure went largely unfunded. (Photo by Quinn Dombrowski/ flickr CC 2.0) This post originally appeared at Common Dreams. America has always been great for the richest 1 percent, and it’s rapidly becoming greater. Confirmation comes from recent work by Thomas Piketty, Emmanuel Saez and Gabriel Zucman; and from the 2015-16 Credit Suisse Global Wealth Databooks (GWD). After Orlando, Examining the Gun Business - The New Yorker Bars in the Old City neighborhood of Philadelphia let out at 2 A.M. On the morning of January 17, 2010, two groups emerged, looking for taxis. At the corner of Market and Third Street, they started yelling at each other.

Scientists reveal 10,000-year-old mummy is Native American ancestor Scientists attempting to map out the historical migrations of North and South America by analysing ancient bones have revealed that a 10,000-year-old skeleton unearthed in a cave in Nevada is the ancestor of a Native American tribe. The iconic skeleton, known as the “Spirit Cave mummy”, was reburied this summer by the Fallon Paiute-Shoshone people in Nevada, bringing closure to a decades-long legal dispute with anthropologists who fought for it to remain on display in a museum. DNA painstakingly extracted from the ancient skull proved the skeleton was an ancestor of the tribe and discredited a longstanding theory that the individual was from a group of “Paleoamericans” that existed in North America before Native Americans. The full genetic details of the skeleton, which is the world’s oldest natural mummy, are published as part of a wide-ranging international study of the ancestry of North and South America. … we have a small favour to ask.

Employees who decline genetic testing could face penalties under proposed bill (luchschen/iStock) Employers could impose hefty penalties on employees who decline to participate in genetic testing as part of workplace wellness programs if a bill approved by a U.S. House committee this week becomes law. In general, employers don't have that power under existing federal laws, which protect genetic privacy and nondiscrimination. But a bill passed Wednesday by the House Committee on Education and the Workforce would allow employers to get around those obstacles if the information is collected as part of a workplace wellness program. Such programs — which offer workers a variety of carrots and sticks to monitor and improve their health, such as lowering cholesterol — have become increasingly popular with companies.