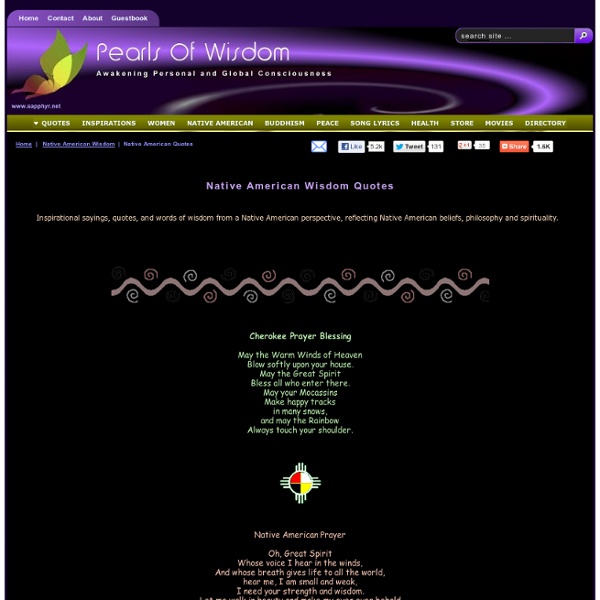 Inspirational sayings, quotes, and words of wisdom from a Native American perspective, reflecting Native American beliefs, philosophy and spirituality. Cherokee Prayer Blessing May the Warm Winds of HeavenBlow softly upon your house.May the Great SpiritBless all who enter there.May your MocassinsMake happy tracksin many snows,and may the RainbowAlways touch your shoulder. Treat the earth well.It was not given to you by your parents,it was loaned to you by your children.We do not inherit the Earth from our Ancestors,we borrow it from our Children. Ancient Indian Proverb You have noticed that everything an Indian does in a circle,and that is because the Power of the World always works in circles,and everything and everything tries to be round. In the old days all our power came to us from the sacred hoopof the nation and so long as the hoop was unbroken the peopleflourished. The life of a man is a circle from childhood to childhood, and so it isin everything where power moves. White Elk Hold On Related:  First North Americans • Words of Wisdom

Ancient Siberian genome reveals genetic origins of Native Americans -- ScienceDaily The genome sequence of a 24,000-year-old Siberian individual has provided a key piece of the puzzle in the quest for Native American origins. The ancient Siberian demonstrates genomic signatures that are basal to present-day western Eurasians and close to modern Native Americans. This surprising finding has great consequences for our understanding of how and from where ancestral Native Americans descended, and also of the genetic landscape of Eurasia 24,000 years ago. The breakthrough is reported in this week's Nature (Advance Online Publication) by an international team of scientists, led by the Centre for GeoGenetics at the Natural History Museum of Denmark (University of Copenhagen). The search for Native American ancestors has been focused in northeastern Eurasia. "Representing the oldest anatomically modern human genome reported thus far, the MA-1 individual has provided us with a unique window into the genetic landscape of Siberia some 24,000 years ago," says Dr. Dr.

Native American culture Perhaps no other group of people has quite the rich and storied culture as those of the Native Americans. They have a history rich in struggle, strife, and triumph. So many aspects of our modern life were adapted from the old Indian cultures practiced centuries ago. The teepee, totem pole, peace pipe, and moccasins are just a few examples, but each of these symbols were actually integral pieces of a larger picture that wove together the tapestry of Native American life. Totem poles were a very integral part of Native American culture. Related Article Links American Indian Articles Index | Indigenous Peoples' Literature Disclaimer: The American Indian Heritage Foundation or Indians.org do not personally endorse or support any of the comments made within the writings of this article.

DNA Analysis Shows Native American Genealogy The suppression of the Native Americans and the decimation of their culture is a black page in the history of the United States. The discrimination and injustices towards this ancient race, which had lived on the American continent long before the European conquerors came to this land, are still present to this day despite the efforts of different groups and organizations trying to restore the justice. The destruction of their culture is one of the most shameful aspects of our history, the extent of the damage that was done is still being down-played and denied entry into textbooks and history-lessons to this day. The origin and history of the Indigenous Peoples of the Americas have been studied for years by researchers from different countries, and a recent DNA study showed that the genealogy of the western aboriginals is one of the most unique in the world. This explanation was persuasive enough; however, there was no strong evidence to support it.

How melancholy expands our capacity for creativity, the best science books of the year, beautifully untranslatable words from around the world & more Hey Peggy Fleming! If you missed last week's edition – the best children's books of the year, Thoreau on the art of walking, Ursula K. Le Guin on the secret of success in writing and any craft, and more – you can catch up right here. Anne Lamott on Grief, Grace, and Gratitude "Grief, when it comes, is nothing like we expect it to be," Joan Didion wrote in her magnificent meditation on the subject. That's precisely what Anne Lamott – one of the most intensely original writers of our time – explores in Small Victories: Spotting Improbable Moments of Grace (public library | IndieBound), the same magnificent volume of reflections on grief, gratitude, and forgiveness that gave us Lamott on the uncomfortable art of letting yourself be seen. From the very preface, titled "Victory Lap," Lamott stops the stride: The worst possible thing you can do when you’re down in the dumps, tweaking, vaporous with victimized self-righteousness, or bored, is to take a walk with dying friends. Dive deeper here.

9 Examples of Indigenous Sense in a Nonsensical Time By Rucha Chitnis / buzzfeed.com Sometimes it seems like we live in nonsensical times. Do you ever wonder what happened to good old common sense? Indigenous voices from around the world who are fighting for cultural survival and protection of nature in their homelands offer simple wisdom in the face of climate change, mining and other development projects. These voices are highlighted in Standing On Sacred Ground, a four-part film series airing on the PBS World Channel through May and June. 1. The first episode of the film series, Pilgrims and Tourists, shows the Winnemem Wintu Tribe in California resisting U.S. government plans to raise the height of Shasta Dam, which threatens their sacred sites and the ceremonies that have taken place on the McCloud RIver for over a thousand years. 2. 3. In episode two of the film series, Profit and Loss, First Nations in Alberta, Canada, fight threats from a mega-mining invasion—the tar sands—dubbed as the world’s largest development project. 4. 5.

Crimes against native culture and children The small state of Maine just took a big step towards statewide healing. In a new state report, The Pine Tree State owned up to the cultural genocide of indigenous communities, particularly the Wabanaki (“The People of the Dawn”) experience. Native Maine Children are “Five Times More Likely to Enter Foster Care” As reported in WCSH 6, the Maine Wabanaki-State Child Welfare Truth and Reconciliation Commission (TRC) report focused on the practice of ripping Wabanaki families and communities apart for the greater good of the nation: white assimilation. In textbooks, American Indian history may talk about specific events, like a war or the first Thanksgiving dinner, or contain benign words like “contact” with non-Natives. As the Maine-Wabanaki Reach explains, from the late 1800s to the 1950s, Wabanaki children: “[W]ere stripped of their cultural identities, punished for speaking their language and abused physically, emotionally, mentally, and sexually. ”

Inspiring Famous Quotes Illustrated With Minimalistic Posters Toronto-based web and graphic designer Ryan McArthur gave inspiring quotes by some of the most brilliant minds of our time a second life with his minimalistic poster designs. Humorous, inspiring and strikingly insightful, these quotes take some twisted turns into our minds with McArthur’s playful illustrations. Show Full Text Some of these designs were created with specific quotes in mind, but others found their literary equivalents only after the illustrations were done. Source: ryanmcarthur.ca | Etsy | Facebook

Native American populations descend from three key migrations, scientists say Scientists have found that Native American populations -- from Canada to the southern tip of Chile -- arose from at least three migrations, with the majority descended entirely from a single group of First American migrants that crossed over through Beringia, a land bridge between Asia and America that existed during the ice ages, more than 15,000 years ago. By studying variations in Native American DNA sequences, the international team found that while most of the Native American populations arose from the first migration, two subsequent migrations also made important genetic contributions. The paper is published in the journal Nature July 11. "For years it has been contentious whether the settlement of the Americas occurred by means of a single or multiple migrations from Siberia," said Professor Andres Ruiz-Linares (UCL Genetics, Evolution and Environment), who coordinated the study. Two striking exceptions to this simple dispersal were also discovered.

Behold! The Ignorant Savage-Part 2 Crowfoot – Blackfoot: "What is life? It is the flash of a firefly in the night. It is the breath of a buffalo in the wintertime. It is the little shadow which runs across the grass and loses itself in the sunset." Eagle Chief – Pawnee: "In the beginning of all things, wisdom and knowledge were with the animals, for Tirawa, the One Above, did not speak directly to man. Mourning Dove – Salish: "Everything on the earth has a purpose, every disease an herb to cure it, and every person a mission. Sarah Winnemucca – Paiute: "The traditions of our people are handed down from father to son. Big Thunder – Wabanaki Algonquin: "The Great Spirit is in all things, he is in the air we breathe. Shooter – Teton Lakota: "All birds, even those of the same species, are not alike, and it is the same with animals and with human beings. George Copway – Ojibwa Chief: “Among the people there have been no written laws. Chief Plenty Coups – Crow: "The ground on which we stand is sacred ground. Zitkala-Sa: Anonymous: N.