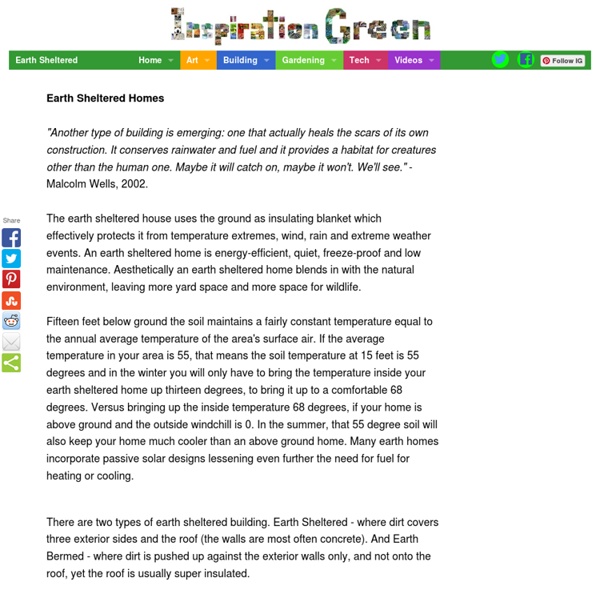 Earth Sheltered Homes "Another type of building is emerging: one that actually heals the scars of its own construction. It conserves rainwater and fuel and it provides a habitat for creatures other than the human one. Maybe it will catch on, maybe it won't. We'll see." - Malcolm Wells, 2002. The earth sheltered house uses the ground as insulating blanket which effectively protects it from temperature extremes, wind, rain and extreme weather events. Fifteen feet below ground the soil maintains a fairly constant temperature equal to the annual average temperature of the area's surface air. There are two types of earth sheltered building. Honingham Earth Sheltered Social Housing. Looks like vertical placed logs are helping to support the berm on the right. Earth sheltered home with conventional facade. Earth sheltered home, as above. The facade may accommodate any architectural styling of the home owners choosing. An award winning earth shelter dwelling by Cam Architects. Casa Organica.

Scandinavian Homes Like Real-Life Hobbit Houses Curb appeal: cozy exterior, extensive windows, and a green roof? These adorable homes prove that a grassy canopy can make the perfect ceiling addition to any house. Green roofs are traditional in many Nordic countries throughout Europe, so much so that there is an annual competition to determine the best green roof project, which is hosted by the Scandinavian Green Roof Association (SGRA). These images feature some of the most stunning living roofs that can be found around the area. These green coverings are not only an aesthetic trend however—the feature offers a variety of environmental and financial perks.

GMO, yeah? 5 surprises from an otherwise boring look at genetically modified crops Researchers at the USDA’s Economic Research Service have stepped back to look at the effect of genetically engineered crops since they were introduced in the U.S. It’s a pretty dry and unsurprising document, but when read carefully a few interesting things jump out. Here’s five. 1.

Going Green Underground: Eco-Retro Earth House Designs They may look a bit dated at first, or at least more whimsical than required for functional living. Still, these earth houses have more to offer than custom curves and a unique aesthetic – including a set of design philosophies, strategies and tactics that are far from just superficial nods to sustainable trends. The designs take everything into account from fire and earthquake protection to integral insulation-efficient arches and buffer rooms for energy-free temperature control. While not every Erdhaus is actually built under the existing ground on a site, they are all tied to their earthen surroundings by sloping sheaths of greenery. Grass-covered walls curve up and continue as green roofs along the tops of each structure. The resulting contiguous thermal mass of this all-in-one exterior wall-and-roof system helps to conserve heating and cooling power.

Eccentric Aesthetics: DIY Eco-Friendly Earthbag Homes The phrase “form follows function” has morphed in meaning over time and is, perhaps rightly, open to interpretation. One interesting extension of this idea is that the form of a building can follow the functions of its constituent parts – that the visual result can reflect the process of construction and that this, in turn, makes the architecture more educational or “honest” – a way to learn the history of a building simply by taking a look at how it was made. In addition to their do-it-yourself, easy-to-build and other sustainability-related benefits, “earth bag” homes – constructed of bags filled with local dirt, mud, sand and/or rock – are also potentially extremely expressive as works of design. Their structural properties and the ways in which they are stacked certainly preclude some design possibilities but they enable others.

What 5 Things can You Do to Change the System? A few weeks ago a reader on this blog asked me an interesting question that I have been mulling over for some while: can I list 5 things everyone needs to do to change the system? It’s a tall order, but I decided to give it a bash. I don’t plan to prescribe anything here, and no one should take my word for it as I’m no paragon of purism. But I have at least dabbled in all that I will suggest, and would like to invite dialogue around those suggestions, and others.

30' ESCAPE Traveler XL Tiny Home on Wheels on October 9, 2015 This is the 30′ ESCAPE Traveler XL tiny home on wheels. In July I showed you the concept drawings for it and now it’s come to reality! Looking for a new house? Eco-friendly underground home on the market in Md. posted Categories: Homes / Dwellings FOX 29 News Philadelphia | WTXF-TV If you're looking for a new place to live, this home on the market in Prince George's County in Maryland will probably give you a double take after you look at it. What makes it stand out is that the home is partially underground. This 3,300-square-foot home sitting on 1.3 acres in Clinton, Md., looks like your typical colonial brick design in the front. Hemp.Org, Campaign for the Restoration and Regulation of Hemp, CRRH, The Hemp and Cannabis Foundation, THCF, THCF Medical Clinics, Medical Marijuana Clinics, Medical Marijuana Doctors, Medical Marijuana Referrals, Cannabis Common Sense, Cannabis Videos, H Help End Marijuana Prohibition in Oregon in 2014 Donate to Help End Marijuana Prohibition in Oregon in 2014 Cannabis Amendment