Rhythm of the Heart - Native American - Buffalo - Plains - Sioux. Native Americans History and Culture. American History: A New World Clash of Cultures. ► Listen to this story in high-quality 192 kbps audio (or right-click/option-click to save) From VOA Learning English, this is THE MAKING OF A NATION – American history in Special English. 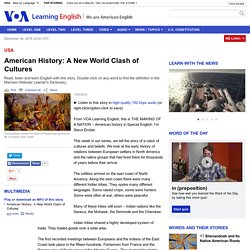 I’m Steve Ember. This week in our series, we tell the story of a clash of cultures and beliefs. We look at the early history of relations between European settlers in North America and the native groups that had lived there for thousands of years before their arrival. Native American Activities, Quizzes, and Comprehension Exercises for Kids « Aaron Huey. Aaron Huey: America's native prisoners of war. Native American Living Conditions on Reservations - Native American Aid. About 22% of our country’s 5.2 million Native Americans live on tribal lands (2010 U.S. 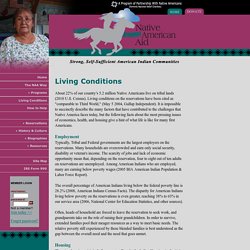 Census). Living conditions on the reservations have been cited as "comparable to Third World," (May 5 2004, Gallup Independent). It is impossible to succinctly describe the many factors that have contributed to the challenges that Native America faces today, but the following facts about the most pressing issues of economics, health, and housing give a hint of what life is like for many first Americans. Typically, Tribal and Federal governments are the largest employers on the reservations. Many households are overcrowded and earn only social security, disability or veteran's income.

The overall percentage of American Indians living below the federal poverty line is 28.2% (2008, American Indians Census Facts). Often, heads of household are forced to leave the reservation to seek work, and grandparents take on the role of raising their grandchildren. There is a housing crisis in Indian country. 31 Native American Quotes on Life and Death. The wisdom of the native American Indians is unbounded and tremendously powerful, enough to transform the human consciousness and help us lead a more peaceful, close-to-nature, compassionate life. 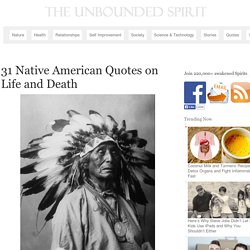 Below are 31 hand-picked native american quotes on life and death which, by contemplating on them, can transmit you great insights that could alter your very state of being. May you learn and enjoy. 1. “What is life? Facts About American Indians Today. What is a federally recognized tribe? 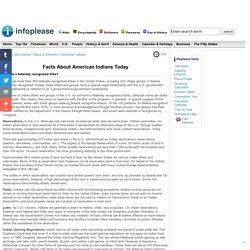 There are more than 550 federally recognized tribes in the United States, including 223 village groups in Alaska. “Federally recognized” means these tribes and groups have a special, legal relationship with the U.S. government. This relationship is referred to as a government-to-government relationship. A number of Indian tribes and groups in the U.S. do not have a federally recognized status, although some are state-recognized. This means they have no relations with the BIA or the programs it operates. Reservations. There are approximately 275 Indian land areas in the U.S. administered as Indian reservations (reservations, pueblos, rancherias, communities, etc.). Approximately 56.2 million acres of land are held in trust by the United States for various Indian tribes and individuals. The states in which reservations are located have limited powers over them, and only as provided by federal law.

Native American Quotes - Great Words From Great Americans. American West - White Man's Opinion of the Plains Indians. As the population of America grew, so people began to move away from the cities and towns onto the Plains. 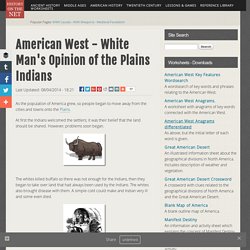 At first the Indians welcomed the settlers; it was their belief that the land should be shared. However, problems soon began. The whites killed buffalo so there was not enough for the Indians, then they began to take over land that had always been used by the Indians. The whites also brought disease with them. A simple cold could make and Indian very ill and some even died. Settlers, looking for new places to live and gold seekers travelled across the Plains in wagons. Missionaries tried to convert the Indians to Christianity, they believed that this was the right thing to do because the Indians were superstitious savages. The whites believed that their way of life was the only true way to live. American treaties with the Indians, such as the Fort Laramie Treaty of 1868, which were made to settle differences, were always broken by the whites. One Word - Episode 24: Redskin (Native Americans) 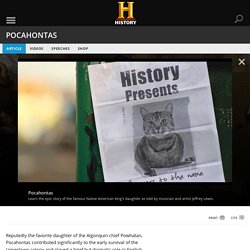 John Smith after his capture by Powhatan’s men in 1607. Her legendary rescue of the English captain on the verge of his execution was probably part of a traditional Indian adoption ceremony (misinterpreted or misunderstood by Smith), though it is possible that without her intercession he would have been killed. In any event, relations between Powhatan and the fledgling colony improved, and Pocahontas, then about twelve years old, became a frequent visitor at Jamestown and an important supplier of food for the colonists.

She also became an informer for the colony, warning Smith of her father’s belligerent plans. After Smith’s return to England, Pocahontas disappears for several years from the historical record. In the public mind, Pocahontas is linked especially, and often romantically, with Smith. Pocahontas - Biography - Folk Hero. Pocahontas, later known as Rebecca Rolfe, was a Native American who assisted English colonists during their first years in Virginia. 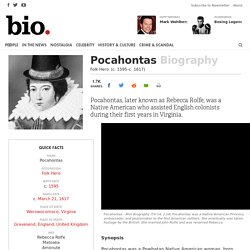 Synopsis Pocahontas was a Powhatan Native American woman, born around 1595, known for her involvement with English colonial settlement at Jamestown, Virginia. In a well-known historical anecdote, she saved the life of Englishman John Smith, by placing her head upon his own at the moment of his execution. Pocahontas later married a colonist, changed her name to Rebecca Rolfe and died while visiting England in 1617. Powhatan Tribes Pocahontas and John Smith Native American ... 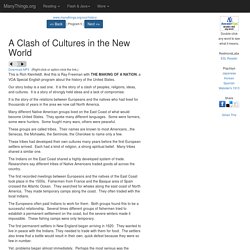 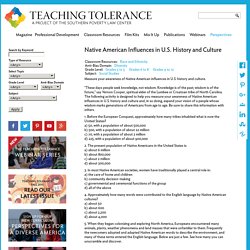 "These days people seek knowledge, not wisdom. Knowledge is of the past; wisdom is of the future," say Vernon Cooper, spiritual elder of the Lumbee or Croatoan tribe of North Carolina. The following activity is designed to help you measure your awareness of Native American influences in U.S. history and culture and, in so doing, expand your vision of a people whose wisdom marks generations of Americans from age to age. Making of a Nation. Native Americans History. Could Half of Oklahoma End Up Under Native American Control? 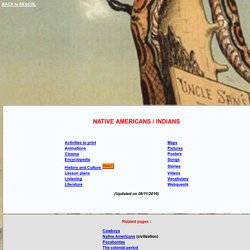 - Text + Audio + Pictures - 26 December 2018 "The Muscogee Creek Nation covers nearly two million hectares of land and 11 Oklahoma counties, with a total population of about 950,000. Recognizing MCN’s jurisdiction meant all this land was legally “Indian Country.” (learningenglish.voanews.com) Riding with Native Americans – in pictures - 3 August 2018 "To mark the 150th anniversary of the Fort Laramie peace treaty between the Sioux nation and US government, the Lakota people rode 400 miles from Green Grass in South Dakota, home to their spiritual leader, Arvol Lookinghorse, to Fort Laramie in Wyoming, where the treaty was signed" (theguardian.com) Native American Tribe Battles to Keep Land - Text + Audio + Pictures - 22 April 2018 "Money from casinos has lifted many Native American tribal economies and made some tribes rich.