Maps of Native American Tribes and Reservations in the United States 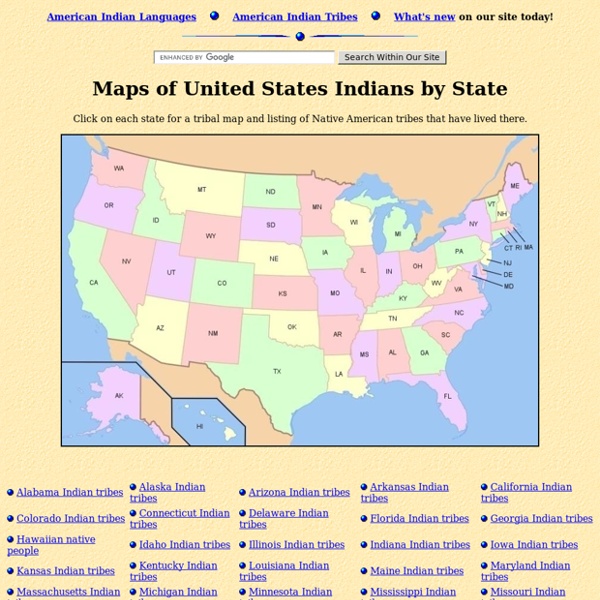 9 Examples of Indigenous Sense in a Nonsensical Time By Rucha Chitnis / buzzfeed.com Sometimes it seems like we live in nonsensical times. Do you ever wonder what happened to good old common sense? Indigenous voices from around the world who are fighting for cultural survival and protection of nature in their homelands offer simple wisdom in the face of climate change, mining and other development projects. The Mohawks Who Built Manhattan (Photos) For generations, Mohawk Indians have left their reservations in or near Canada to raise skyscrapers in the heart of New York City. High atop a New York University building one bright September day, Mohawk ironworkers were just setting some steel when the head of the crew heard a big rumble to the north. Suddenly a jet roared overhead, barely 50 feet from the crane they were using to set the steel girders in place.

Good thing Steve Jobs did not attend school in TEXAS 2 clicks Omar Ghabra won Twitter with these photos, and this quip: “An Arab-looking man of Syrian descent in a garage w/his accomplice building what appears to be a bomb. Arrest them.” The tweet was a response to the story everyone's outraged about today: Ahmed Mohamed, the kid in Texas whose wonderful homemade clock sparked a racist reply by his school, and by authorities. Apple founder Steve Jobs, seen here in classic “garage” photos with Steve Wozniak, was the son of a Syrian migrant to the United States. Ultra-thin USB powered light box

Why Kindergarten in Finland Is All About Playtime (and Why That Could Be More Stimulating Than the Common Core) “The changes to kindergarten make me sick,” a veteran teacher in Arkansas recently admitted to me. “Think about what you did in first grade—that’s what my 5-year-old babies are expected to do.” The difference between first grade and kindergarten may not seem like much, but what I remember about my first-grade experience in the mid-90s doesn’t match the kindergarten she described in her email: three and a half hours of daily literacy instruction, an hour and a half of daily math instruction, 20 minutes of daily “physical activity time” (officially banned from being called “recess”) and two 56-question standardized tests in literacy and math—on the fourth week of school.

Interactive map: Loss of Indian land The Vault is Slate's history blog. Like us on Facebook, follow us on Twitter @slatevault, and find us on Tumblr. Find out more about what this space is all about here. This interactive map, produced by University of Georgia historian Claudio Saunt to accompany his new book West of the Revolution: An Uncommon History of 1776, offers a time-lapse vision of the transfer of Indian land between 1776 and 1887. As blue “Indian homelands” disappear, small red areas appear, indicating the establishment of reservations. (Above is a GIF of the map's time-lapse display; visit the map's page to play with its features.)

A mini history lesson about the concentration camps on American soil. During World War II, a young boy was forced from his home with his family, placed on a cramped train, and sent to an isolated camp across the country with no knowledge of when he would be able to return home. He and his family were confined to camps for years, solely on the basis of their ethnicity. This isn’t the story of an inhumane atrocity that happened across an ocean or in another country. It happened on U.S. soil in 1942. Louisiana Purchase was used to cover theft of Indigenous People's land Wikimedia Commons/White House Historical Association It’s a familiar chapter in our history, part of the triumphant narrative of westward expansion: In 1803, the United States bought a massive chunk of North America, and we got it for a song. Spain had ceded the Louisiana Territory to France, and Napoleon, in turn, offloaded it to American diplomats in Paris after the Haitian Revolution ruined his plans for the New World. Vaguely defined at the time as the western watershed of the Mississippi River, and later pegged at about 827,000 square miles, the acquisition nearly doubled the national domain for a mere $15 million, or roughly $309 million in today’s dollars.

How much money teachers earn around the world How much do educators get paid for their work? We asked 16 public school teachers in communities around the world — from Kildare to Kathmandu, Johannesburg to Oslo — to tell us what they earned in one month (and how they spent it). Here’s what they said: Toronto, Canada Tell us about yourself: I’m 32 years old; I’m a middle school Special Education teacher working for the Toronto District School Board. I’ve been teaching kids with autism for seven years.

S.C. Gwynne - Comanche Nation: The Rise And Fall Of An 'Empire' Empire of the Summer MoonBy S. C. GwynneHardcover, 384 pagesScribnerList price: $27.50 A New Kind of War Cavalrymen remember such moments: dust swirling behind the pack mules, regimental bugles shattering the air, horses snorting and riders' tack creaking through the ranks, their old company song rising on the wind: "Come home, John! Don't stay long. how-finland-is-finally-putting-an-end-to-bullying Whether tormented relentlessly by older siblings at home or pushed around by the meanest of peers at school, we’ve likely all experienced bullying to some degree or another. “Research suggests that nine out of ten elementary students have been bullied by a classmate to some degree, although only 36% will report instances of bullying.