The Terrifying Collapse of the Plains Indians. The Lewis and Clark expedition from an Indigenous perspective - Indian Country Today. Wil Phinney Underscore.news The Lewis and Clark National Historic Trail, 4,900 miles from Pennsylvania to Oregon, tells an epic story of two explorers and their crew who made their way across the continent nearly 220 years ago. 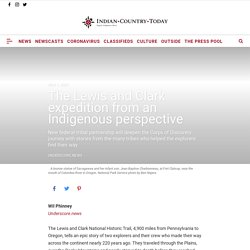 They traveled through the Plains, over the Rocky Mountains and nearly starved to death before they reached the Pacific Ocean. That is not the only story, though. Apsáalooke honor Tomb of Unknown 100 years later - Indian Country Today. Jourdan Bennett-BegayeIndian Country Today ARLINGTON NATIONAL CEMETERY, Virginia — The mid-Atlantic air is in the crisp 40s at 7 a.m. 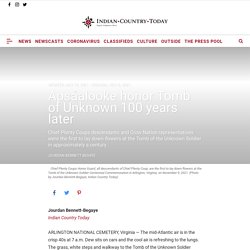 Thanksgiving anniversary: Wampanoag Indians regret helping Pilgrims 400 years ago. What About the Missing Women Who Look Like Me? A public art installation commemorating missing and murdered Indigenous women and girls in Burlington, Canada, October 2020. 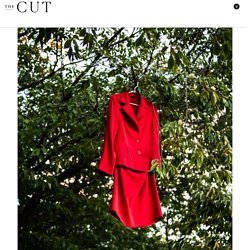 Photo: Stacey Newman/Shutterstock As someone who has lived through the terror, frustration, and catastrophic loss of having friends and relatives vanish or be murdered, I wouldn’t wish that kind of suffering and grief on anyone — regardless of their race, nationality, class, or background. Grand Ronde tribe reclaims Willamette Falls in Oregon - Indian Country Today. Jamie HaleAssociated Press After a private blessing and a prayer, the Confederated Tribes of Grand Ronde invited gathered media to watch as an excavator tore into a wall of the old, abandoned paper mill that the tribe says has stood on its ancestral grounds for too long. 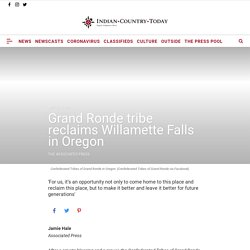 The tribe held a symbolic demolition event at the old Blue Heron Paper Mill at Willamette Falls on Tuesday, representing a small step toward removing the industrial site and returning it to Indigenous hands, The Oregonian/OregonLive reported. Earliest evidence of human activity found in the Americas. Footprints found at White Sands National Park in New Mexico provide the earliest unequivocal evidence of human activity in the Americas and offer insight into life over 23,000 years ago. 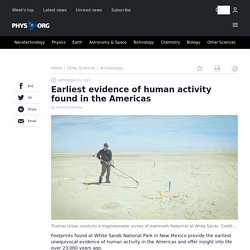 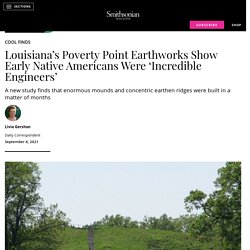 The remains of earthen mounds built by the mysterious civilization still rise as much as 66 feet above the ground at Poverty Point, Louisiana. The new study, published in the journal Southeastern Archaeology, finds that people of the region raised the enormous earthworks in a matter of months or even just weeks. “One of the most remarkable things is that these earthworks have held together for more than 3,000 years with no failure or major erosion,” study author Tristram R. First Americans Museum Grand Opening Celebration Includes Procession of All 39 Oklahoma Tribes. The First Americans Museum in Oklahoma City will host its grand opening September 18-19. 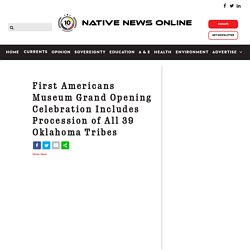 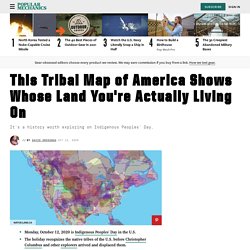 The holiday recognizes the native tribes of the U.S. before Christopher Columbus and other explorers arrived and displaced them.An interactive tool shows you which indigenous populations once lived on the land where your home now is. As more and more communities recognize the second Monday in October as Indigenous Peoples' Day, the question of how best to celebrate indigenous people arises. A great first step is learning about which tribes resided in your specific part of the country before vicious settler colonialism uprooted them, or likely worse. Dive deeper. ➡ Read , starting now. Thanks to a mapping company's clever approach to Google Maps, it's possible to learn which native tribes once inhabited your neighborhood. The tool is called Native-Land, and it's run by Canadian developer Victor G. Victor G.Temprano. PHOTO FINISH: Unseen images from an epic exploration of Alaska Native culture are finally seeing the light.

Four Indigenous women of Nunavik Island in the Bering Sea. 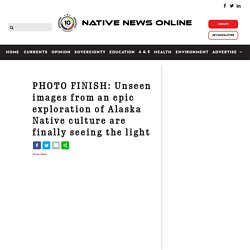 People across the country are waking up to the reality that Canada is a country built on the violent dispossession of Indigenous peoples. 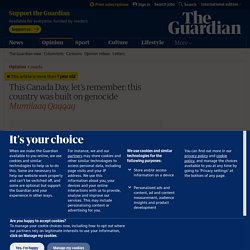 The horrifying reports of unmarked graves of children at residential “schools” in Kamloops, British Columbia, Brandon, Manitoba, and most recently Cowessess First Nation in Saskatchewan have shocked many Canadians and others around the world. However, these were not discoveries, but confirmations of what we knew all along: Canada was built on genocide. In light of this, cities and towns across the country are rethinking Canada Day. Some, like Victoria, have cancelled it outright while others, like Iqaluit, are scaling back the celebrations and treating it as a day of reflection and mourning. This is a good thing.

Pennefather Treaties. How the Dawes Act Stole 90 Million Acres of Native American Land. In the long, dark history of the United States government's mistreatment of Native Americans, most people are familiar with the Trail of Tears, in which approximately 15,000 Native American men, women and children died during forced relocation from their tribal homelands in the American Southeast to Indian Territory in modern-day Oklahoma. But the theft of Native American tribal land didn't stop with the Indian Removal Act of 1830 that authorized the Trail of Tears. Over the next century, Congress passed a series of laws that systematically stripped tribes of their lands, selling them to white settlers and corporations. The Dawes Act, while not a household name, was perhaps the single most devastating government policy of them all.

Also known as the General Allotment Act of 1887, the Dawes Act resulted in the loss of 90 million acres (36 million hectares) of Native lands from 1887 to 1934 — the equivalent of two-thirds of all tribal landholdings at the time. Uncovered tracks: The bloody legacy of Canada’s railways. Thousands of tourists flock to Craigellachie’s Last Spike Gift Shoppe each year. They pose for photos by the tracks and take turns re-enacting the 1885 photograph of Donald Smith driving in the last spike.

But several hundred kilometres north, the Coastal GasLink pipeline is charging through the Wet’suwet’en territories that brought Canadian railways to a grinding halt. Nov. 7 marked the 135th anniversary of the Canadian Pacific Railway’s completion. Although the railway has always been a private corporation, it was — and remains — a wrought iron symbol of Confederation. But for First Nations peoples, Canada’s railways are vehicles for expropriation. “Hot metal screaming through the valleys, echoing loud enough to wake the mountains,” the voice of Wet’suwet’en poet Jennifer Wickham shakes as she recites a poem from her collection, I’m a Real Skin.

This Tribal Map Of America Reveals Whose Land You're Actually Living On. October 12th marks Columbus Day, commemorating the landing of Christopher Columbus in the Americas in 1492. Is this occasion worth celebrating, though? Well, there are many different opinions out there. Turns out, a YouGov poll of more than 7,000 US adults found that Americans narrowly view the European explorer as more of a villain (40%) than a hero (32%). Moreover, these past few years, more and more US cities have been moving to rename the holiday Indigenous People’s Day as well as removing Christopher Columbus statues.

Despite all the controversial discussions, though the thing that we all could do around this time is to try our best to educate ourselves. Earliest evidence for humans in the Americas. Image copyright Ciprian Ardelean Humans settled in the Americas much earlier than previously thought, according to new finds from Mexico. They suggest people were living there 33,000 years ago, twice the widely accepted age for the earliest settlement of the Americas. The results are based on work at Chiquihuite Cave, a high-altitude rock shelter in central Mexico. Archaeologists found thousands of stone tools suggesting the cave was used by people for at least 20,000 years. Photo: National Anthropological Archives, Smithsonian Institute In the early age of photography, portraits of people were few and far between, but they had one thing in common: serious faces.

Nowadays, you’d expect to see an emotionless face in these old-timey photographs, which is why the recent discovery of an image of a young woman smiling from nearly 130 years ago is really unusual and utterly fascinating. The Man Who Documented Native American Cultures. Edward Sheriff Curtis. Top 10 Navajo Swear Words. Many articles ~ Indians.org click 2x. Interactive map: Loss of Indian land.

The Invasion of America: How the United States Took Over an Eighth of the World. Black Elk. Heȟáka Sápa (Black Elk) (December 1, 1863 – August 19, 1950)[1] was a famous wičháša wakȟáŋ (medicine man and holy man) and heyoka of the Oglala Lakota (Sioux) who lived in the present-day United States, primarily South Dakota.

Black Elk Speaks. Black Elk Speaks is a 1932 book by John G. Neihardt, an American poet and writer, who relates the story of Black Elk, an Oglala Lakota medicine man. Black Elk spoke in Lakota and Black Elk's son, Ben Black Elk, who was present during the talks, translated his father's words into English.[1] Neihardt made notes during these talks which he later used as the basis for his book.[2] El Norte review: an epic and timely history of Hispanic North America. Two Spirits, One Heart, Five Genders.

Scientists reveal 10,000-year-old mummy is Native American ancestor. Maps power to shape history - early native americans click 2x. Native cartography: a bold mapmaking project that challenges Western notions of place. ‘More lands have been lost to Native peoples probably through mapping than through physical conflict.’ Maps have been used not only to encroach on Native Americans lands, but to diminish their cultures as well. With every Spanish, French or English placename that eclipses a Native one, a European narrative of place and space becomes further entrenched. In an effort to help reclaim his region for his people, Jim Enote, a Zuni farmer and the director of the {*style:<a href=' A:wan Museum and Heritage Center{*style:</a>*} in New Mexico, has organised a unique project intended to help bring indigenous narratives back to the land.