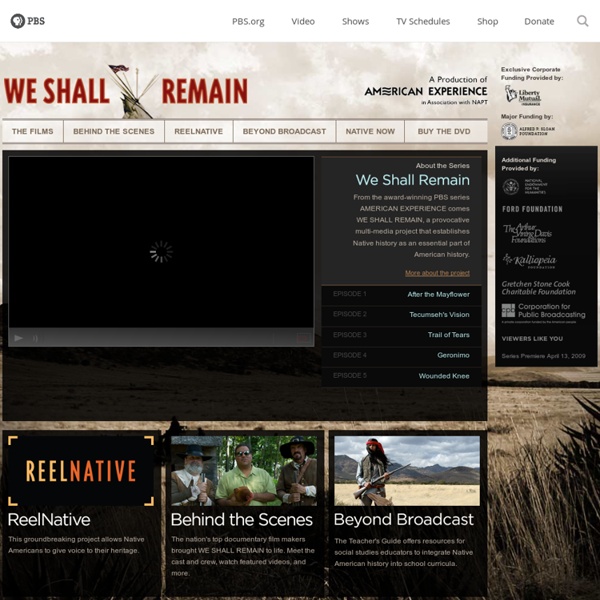 In 1621, the Wampanoag of New England negotiated a treaty with Pilgrim settlers. A half-century later, as a brutal war flared between the English and a confederation of Indians, this diplomatic gamble seemed to have been a grave miscalculation. Watch preview | More About the Film

Native History: Dawes Act Signed Into Law to 'Civilize' Indians This Date in Native History: On February 8, 1887, U.S. President Grover Cleveland signed the Dawes Severalty Act into law, introducing private land ownership to American Indians. Arguably one of the most devastating for Natives, the act slashed millions of acres from the existing land base, broke up tribes as communal units and threatened tribal sovereignty. It applied to all Indian nations, with exceptions in the Cherokee, Creek, Choctaw, Chickasaw, Seminole, Osage, Miami, Sac and Fox, Peoria and Seneca nations. The act, also known as the General Allotment Act, was named for Massachusetts Congressman Henry Dawes, who declared that private property had the power to civilize. To be civilized, he said, was to “wear civilized clothes, cultivate the ground, live in houses, ride in Studebaker wagons, send children to school, drink whiskey (and) own property.”

Bugscope: Project Overview The Bugscope Project enables live interactive control of an FEI XL-30 ESEM FEG microscope through a web browser. An ESEM is an Environmental Scanning Electron Microscope that is similar to, and often operates as, a traditional scanning electron microscope (SEM). SEM is an exciting complement to the more well-known light microscopy that many experience in school. The most obvious benefit of SEM over light microscopy is that it can achieve more than 100 times greater magnification. The interaction of electrons with samples is vastly different than light, which means you don't see color, transparent objects are opaque, and surface features are rendered in incredible detail. Compared to light microscopy, electron microscopes are larger, more complicated, require more maintenence and most of all are more expensive.

Russell Means Russell Charles Means (November 10, 1939 – October 22, 2012) was an American Oglala Lakota activist for the rights of Native American people and libertarian political activist. He became a prominent member of the American Indian Movement (AIM) after joining the organization in 1968, and helped organize notable events that attracted national and international media coverage. Means was active in international issues of indigenous peoples, including working with groups in Central and South America, and with the United Nations for recognition of their rights. He was active in politics at his native Pine Ridge Indian Reservation and at the state and national level. Carlisle Indian Industrial School History Note: I use the term "Indian" throughout this article to identify the peoples of the various autochthonous nations within the U.S. borders, who were affected by and recruited for the Indian School experiment, in keeping with the written accounts of the historic period during the school's existence. Student body assembled on the Carlisle Indian School Grounds. Photo courtesy of Carlisle-www.army.mil

Contemporary Native Photographers and the Edward Curtis Legacy - Portland Art Museum This major exhibition features contemporary photographs by Native American photographers Zig Jackson, Wendy Red Star, and Will Wilson in dialogue with photographs from Edward Sheriff Curtis’ renowned body of work The North American Indian. This timely exhibition and associated educational programming will ask visitors to consider Curtis’ continuing influence on the interpretation of Native American culture while highlighting contemporary reactions to his complex role within the history of representation of indigenous peoples. Contemporary Native Photographers and the Edward Curtis Legacy: Zig Jackson, Wendy Red Star, Will Wilson will feature multiple volumes from the groundbreaking publication The North American Indian. Funded by financier and philanthropist J.P. Morgan, the 20-book set was published in a limited edition between 1907 and 1930. Curtis’ magnum opus charts the cultural practices, languages, and traditions of more than eighty Native American tribes.

» The Cherokee/Seminole Removal Role Play Zinn Education Project In her book A Century of Dishonor, published in 1881, Helen Hunt Jackson wrote, “There will come a time in the remote future when, to the student of American history [the Cherokee removal] will seem well-nigh incredible.” The events leading up to the infamous Trail of Tears, when U.S. soldiers marched Cherokee Indians at bayonet-point almost a thousand miles from Georgia to Oklahoma, offer a window into the nature of U.S. expansion—in the early 19th century, but also throughout this country’s history. The Cherokees were not the only indigenous people affected by the Indian Removal law and the decade of dispossession that followed. The Seminoles, living in Florida, were another group targeted for resettlement. For years, they had lived side by side with people of African ancestry, most of whom were escaped slaves or descendants of escaped slaves.

Bury My Heart at Wounded Knee - Wikipedia Before the publication of Bury My Heart at Wounded Knee, Dee Brown had become well versed in the history of the American frontier. Having grown up in Arkansas, he developed a keen interest in the American West, and during his graduate education at George Washington University and his career as a librarian for both the US Department of Agriculture and the University of Illinois at Urbana-Champaign, he wrote numerous books on the subject.[3] Brown's works maintained a focus on the American West, but ranged anywhere from western fiction to histories to even children's books. Many of Brown's books revolved around similar Native American topics, including his Showdown at Little Bighorn (1964) and The Fetterman Massacre (1974).[4] Bury My Heart at Wounded Knee was first published in 1970 to generally strong reviews. Synopsis[edit] In the first chapter, Brown presents a brief history of the discovery and settlement of America, from 1492 to the Indian turmoil that began in 1860.

Pilar's Classroom: Games "In 1606, some 105 adventurers set off from England to try and establish the first permanent English colony in the New World. They settled in what is now the state of Virginia and called their colony first James Fort, and then James Towne, in honor of James I, the King of England. The early years of the colony were nearly a total disaster. Almost half of the settlers died due to poor choices in settlement location, management of resources, and quarrels with the indigenous Powhatan Indians. You are the Captain of the Jamestown Colony: Can you do any better than the real colonists? You will have a copy of the London Company's Instructions to help guide you.

Lakota, Dakota, Nakota - The Great Sioux Nation In 1862, after a failed crop the year before and a winter starvation, the federal payment was late to arrive. The local traders would not issue any more credit to the Dakota and the local federal agent told the Dakota that they were free to eat grass. As a result on August 17, 1862, the Sioux Uprising began when a few Dakota men attacked a white farmer, igniting further attacks on white settlements along the Minnesota River. The US Army put the revolt down, then later tried and condemned 303 Dakota for war crimes. President Abraham Lincoln remanded the death sentence of 285 of the warriors, signing off on the execution of 38 Dakota men by hanging on December 29, 1862 in Mankato, Minnesota, the largest mass execution in US history.

What if people told European history like they told Native American history? The first immigrants to Europe arrived thousands of years ago from central Asia. Most pre-contact Europeans lived together in small villages. Because the continent was very crowded, their lives were ruled by strict hierarchies within the family and outside it to control resources. Europe was highly multi-ethnic, and most tribes were ruled by hereditary leaders who commanded the majority “commoners.” These groups were engaged in near constant warfare.Pre-contact Europeans wore clothing made of natural materials such as animal skin and plant and animal-based textiles.

A Photographer Remembers Wounded Knee, 40 Years Later : The Picture Show Vietnam veteran, Sid Mills, a Yakima man, stands guard. Owen Luck Lakota Elder Tom Bad Cob sings a Lakota lament. This would be the last time I would see him, as pressure from law enforcement prevented me from returning to Pine Ridge for many years. Owen Luck Potrait of a Lakota elder Owen Luck The FBI blocks the road. Owen Luck Entering the hamlet of Wounded Knee. interview with Sherman Alexie BILL MOYERS: Welcome. Inequality matters. You will hear people say it doesn’t, but they are usually so high up the ladder they can’t even see those at the bottom.

Flipped learning: A response to five common criticisms One of the reasons this debate exists is because there is no true definition of what “flipped learning” is. Over the past few years, the Flipped Learning method has created quite a stir. Some argue that this teaching method will completely transform education, while others say it is simply an opportunity for boring lectures to be viewed in new locations. While the debate goes on, the concept of Flipped Learning is not entirely new. Dr. Eric Mazur of Harvard University has been researching this type of learning since the early ’90s, and other educators have been applying pieces of the Flipped Learning method for even longer.