12 Little Known Laws of Karma (That Will Change Your Life) 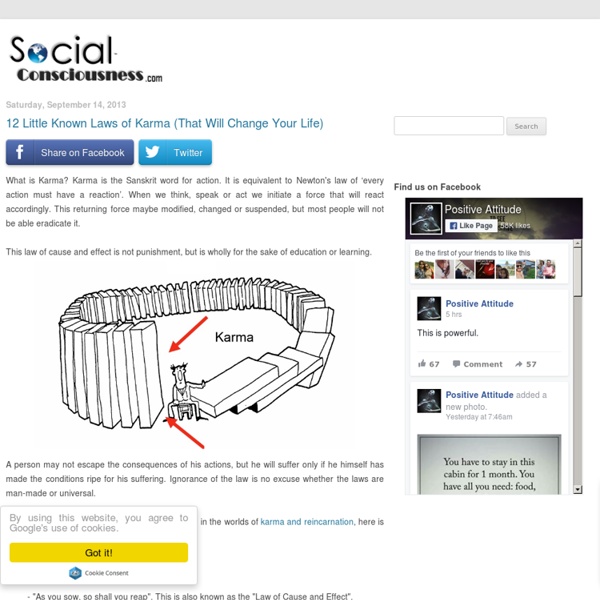 What is Karma? Karma is the Sanskrit word for action. It is equivalent to Newton's law of ‘every action must have a reaction’. When we think, speak or act we initiate a force that will react accordingly. This returning force maybe modified, changed or suspended, but most people will not be able eradicate it. This law of cause and effect is not punishment, but is wholly for the sake of education or learning. A person may not escape the consequences of his actions, but he will suffer only if he himself has made the conditions ripe for his suffering. To stop being afraid and to start being empowered in the worlds of karma and reincarnation, here is what you need to know about karmic laws. THE GREAT LAW - "As you sow, so shall you reap". Sources:Bliss Returned and Raven Emrys Learn More:

Number Sequences From The Angels The angels do their best to get our attention and to communicate with us. In this way, they help us heal our own lives. However, we often discount the signs they give us, writing them off as mere coincidences or our imagination. The angels say: “We can’t write our messages to you in the sky. You’ve got to pay attention and believe when you see any patterns forming in your life especially in response to any questions or prayers you’ve posed.

Man Finds A Mystery Box In Dumpster, And What He Found Inside Still Hasn’t Been Explained Reddit user TramStopDan found a handmade wooden box in a dumpster. On the face of things, the box didn’t look very unusual – it had hinges, a handle, and a pair of locks. But that all changed when he opened it and discovered stacks of papers featuring diary entries about flying saucer visits in the late 1960s to 1980, plus a whole bunch of other crazy stuff like drawings of biblical creatures. That’s pretty odd, but things got odder, and this is why the box was coined “The Box Of Crazy.”

Divinity Codes Activation within the New 5-12D Human Divine Blueprint ​12-Strand DNA The following codes are lying dormant within our Restored Divine Blueprint. Once the Divine Blueprint is anchored and merged with the physical body, the higher frequencies of Light can be directed to activate dormant codes within this blueprint of Divinity. SHARE YOUR TRANSMISSION EXPERIENCES HERE Relationship Between the Etheric Double & Physical Body by HiFi Healers on 09/03/16 The physical form is the instrument through which our souls expresses itSelf in the lower dimensions. Since our spiritual progression is sometimes limited by the functions of that instrument through physical illness, emotional upsets, and mental distresses—it makes sense for us to understand something of its nature.

The Language of Nature – The Trees Will Teach You Telepathy By Serena Woods Guest Writer for Wake Up World Have you ever wondered what “telepathy” really means? Numbers and their Meanings Powerful Sacred Jewelry and Talismans Masterfully Crafted by the Known Artist - David Weitzman Numerology | Kabbalah | Amulets Artist Spent a Year in the Woods Creating Mysterious Sculptures Deep in the woods of southern France, artist Spencer Byles transformed the forest into a mysterious wonderland through a series of spectacular, organic sculptures. Byles spent a year immersed in the woodlands of La Colle sur Loup, Villeneuve-Loubet, and Mougins for this ambitious project. Surrounded by flora and fauna, the sculptor used only cables and natural, found materials to create his stunning, large-scale works of art. According to Byles, many people come across his sculptures by chance in the woods.

Dismaland - Wikipedia The 'Tropicana' swimming pool became 'Dismaland' Dismaland was a temporary art project organised by street artist Banksy, constructed in the seaside resort town of Weston-super-Mare in Somerset, England.[1] Prepared in secret, the pop-up exhibition at the Tropicana, a disused lido, was "a sinister twist on Disneyland" that opened during the weekend of 21 August 2015[2] and closed permanently on 27 September 2015, 36 days later. Banksy described it as a "family theme park unsuitable for children."[3]