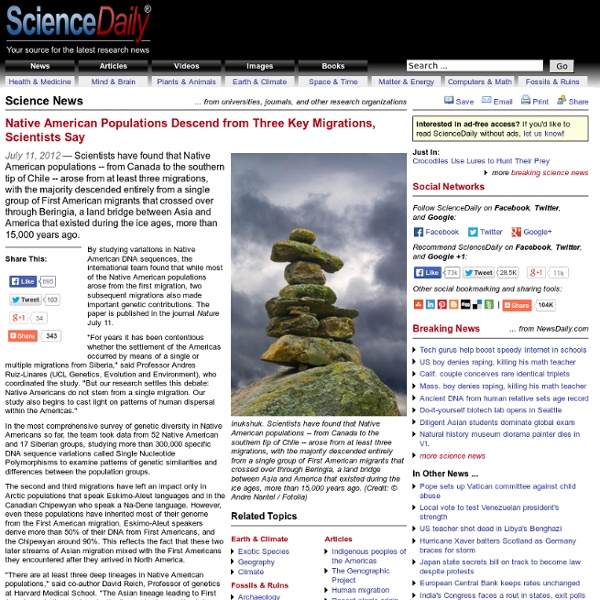 Scientists have found that Native American populations -- from Canada to the southern tip of Chile -- arose from at least three migrations, with the majority descended entirely from a single group of First American migrants that crossed over through Beringia, a land bridge between Asia and America that existed during the ice ages, more than 15,000 years ago. By studying variations in Native American DNA sequences, the international team found that while most of the Native American populations arose from the first migration, two subsequent migrations also made important genetic contributions. The paper is published in the journal Nature July 11. "For years it has been contentious whether the settlement of the Americas occurred by means of a single or multiple migrations from Siberia," said Professor Andres Ruiz-Linares (UCL Genetics, Evolution and Environment), who coordinated the study. "But our research settles this debate: Native Americans do not stem from a single migration.

Skeletal remains of 24,000-year-old boy raise new questions about first Americans Results from a DNA study of a young boy's skeletal remains believed to be 24,000 years old could turn the archaeological world upside down -- it's been demonstrated that nearly 30 percent of modern Native American's ancestry came from this youngster's gene pool, suggesting First Americans came directly from Siberia, according to a research team that includes a Texas A&M University professor. Kelly Graf, assistant professor in the Center for the Study of First Americans and Department of Anthropology at Texas A&M, is part of an international team spearheaded by Eske Willerslev and Maanasa Raghaven from the Centre for GeoGenetics at the University of Copenhagen, Denmark and additional researchers from Sweden, Russia, United Kingdom, University of Chicago and University of California-Berkeley. Their work, funded by the Danish National Science Foundation, Lundbeck Foundation, and the National Science Foundation, is published in the current issue of Nature magazine.

Irish town builds memorial to thank Native Americans who helped during Famine A sculpture of nine eagle feathers will be installed in Bailic Park, in Midleton, Co Cork to thank the Choctaw Indians for their kindness and support during the Great Irish Famine. Despite the oppression faced by the Choctaws in the years preceding the famine, on hearing of the plight and hunger of the Irish people in 1847, they raised $170 to send to the Irish people and ease their suffering. This figure is equivalent to tens of thousands of dollars in today’s currency. Choctaw Sculpture photo by Irish Examiner. The sculpture, consisting of nine giant, stainless steel eagle feathers, is currently being completed by C ork sculptor Alex Pentek.

The Mohawks Who Built Manhattan (Photos) For generations, Mohawk Indians have left their reservations in or near Canada to raise skyscrapers in the heart of New York City. High atop a New York University building one bright September day, Mohawk ironworkers were just setting some steel when the head of the crew heard a big rumble to the north. Suddenly a jet roared overhead, barely 50 feet from the crane they were using to set the steel girders in place. “I looked up and I could see the rivets on the plane, I could read the serial numbers it was so low, and I thought ‘What is he doing going down Broadway?’”

Baffling 400,000-Year-Old Clue to Human Origins In a paper in the journal Nature, scientists reported Wednesday that they had retrieved ancient human DNA from a fossil dating back about 400,000 years, shattering the previous record of 100,000 years. The fossil, a thigh bone found in Spain, had previously seemed to many experts to belong to a forerunner of Neanderthals. But its DNA tells a very different story. It most closely resembles DNA from an enigmatic lineage of humans known as Denisovans. Until now, Denisovans were known only from DNA retrieved from 80,000-year-old remains in Siberia, 4,000 miles east of where the new DNA was found. 9 Examples of Indigenous Sense in a Nonsensical Time By Rucha Chitnis / buzzfeed.com Sometimes it seems like we live in nonsensical times. Do you ever wonder what happened to good old common sense? Indigenous voices from around the world who are fighting for cultural survival and protection of nature in their homelands offer simple wisdom in the face of climate change, mining and other development projects. These voices are highlighted in Standing On Sacred Ground, a four-part film series airing on the PBS World Channel through May and June.

The Map Of Native American Tribes You've Never Seen Before : Code Switch Aaron Carapella, a self-taught mapmaker in Warner, Okla., has designed a map of Native American tribes showing their locations before first contact with Europeans. Hansi Lo Wang/NPR hide caption toggle caption Prehistoric Cave-art. Prehistoric Cave Art: Prehistoric cave-art is important as it serves as some of the best means of showing the interaction between our primitive ancestors and the world as they perceived it. The Image (right) is the most basic self portrait (From Pech Merle, c. 25,000 BP). Through it we can see the first steps of our awakenings as a species. There are certain characteristics of cave-art that allow us to begin to form an impression of the people behind the drawings, often found at the depths of long, deep tunnel systems in small secretive caverns. Quick Links:

DNA Analysis Shows Native American Genealogy The suppression of the Native Americans and the decimation of their culture is a black page in the history of the United States. The discrimination and injustices towards this ancient race, which had lived on the American continent long before the European conquerors came to this land, are still present to this day despite the efforts of different groups and organizations trying to restore the justice. The destruction of their culture is one of the most shameful aspects of our history, the extent of the damage that was done is still being down-played and denied entry into textbooks and history-lessons to this day. The origin and history of the Indigenous Peoples of the Americas have been studied for years by researchers from different countries, and a recent DNA study showed that the genealogy of the western aboriginals is one of the most unique in the world.

Interactive map: Loss of Indian land The Vault is Slate's history blog. Like us on Facebook, follow us on Twitter @slatevault, and find us on Tumblr. Find out more about what this space is all about here. Michael Tellinger - Civilization Scholars have told us that the first civilisation on Earth emerged in a land called Sumer some 6000 years ago. The persistent research by South Africans Michael Tellinger, Johan Heine and a team of leading scientists, over an extend seven-year period, has resulted in astonishing new archaeological and scientific discoveries. It shows that the Sumerians and even the Egyptians inherited all their knowledge from an earlier advanced civilisation that lived at the southern tip of Africa more than 200,000 years ago… mining gold. These were also the people who carved the first Horus bird, the first Sphinx, built the first pyramids and built an accurate stone calendar right in the heart of it all.