Eco Homes from the Earth: 7 Ways to DIY 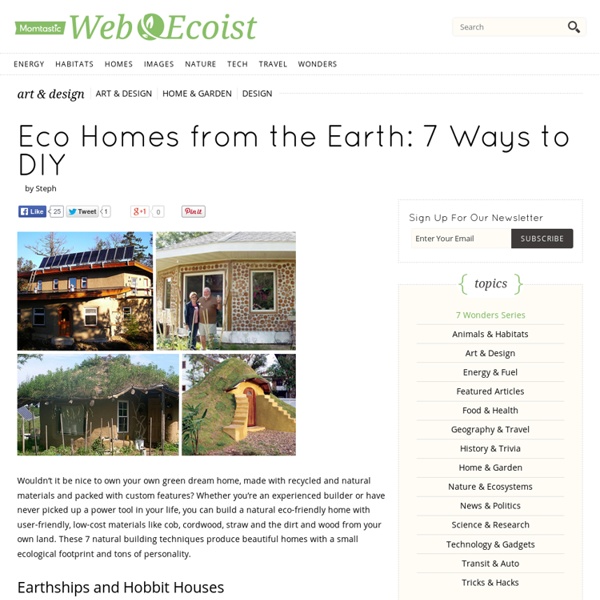 Wouldn’t it be nice to own your own green dream home, made with recycled and natural materials and packed with custom features? Whether you’re an experienced builder or have never picked up a power tool in your life, you can build a natural eco-friendly home with user-friendly, low-cost materials like cob, cordwood, straw and the dirt and wood from your own land. These 7 natural building techniques produce beautiful homes with a small ecological footprint and tons of personality. Earthships and Hobbit Houses (images via dominicspics, ECOnscious, Earthship Biotecture) [youtube=L9jdIm7grCY] They seem to be a living part of the very earth itself, often with nothing but a façade and some windows to betray the presence of a home in the hillside. (images via: simondale.net) Among the most famous examples of a ‘hobbit house’ is “A Low Impact Woodland Home”, self-built in Wales for about 1000-1500 man-hours (over four months) and £3000. Cob (images via: ziggy fresh) [youtube=F0KDp00n4fs] Cordwood Related:  [ Bookmark Hell ] • PermaMente

Natural Building Blog Earth Sheltered Earth Sheltered Homes "Another type of building is emerging: one that actually heals the scars of its own construction. It conserves rainwater and fuel and it provides a habitat for creatures other than the human one. Maybe it will catch on, maybe it won't. We'll see." - Malcolm Wells, 2002. The earth sheltered house uses the ground as insulating blanket which effectively protects it from temperature extremes, wind, rain and extreme weather events. Fifteen feet below ground the soil maintains a fairly constant temperature equal to the annual average temperature of the area's surface air. There are two types of earth sheltered building. Honingham Earth Sheltered Social Housing. Looks like vertical placed logs are helping to support the berm on the right. Earth sheltered home with conventional facade. Earth sheltered home, as above. The facade may accommodate any architectural styling of the home owners choosing. An award winning earth shelter dwelling by Cam Architects. Casa Organica.

DIY Air Conditioners – How to Make Your Own Cool Air September 7, 2010 5:00 PM The California Cooler The California Cooler is a revival of an old technology driven by an insight that's overlooked in these days of engineered indoor environments: Cool air keeps things cool. In the days before refrigerators, pantries in Northern California homes had outside vents that preserved perishables throughout cool nights. Liquid-Cooled Car Seats Afraid your baby's seat is getting too hot? Dew Bucket: An Evaporative Drink Cooler Consider these two facts: Evaporation cools things, and bottles can't sweat like people. Portable Air Conditioner This is a $10 air-conditioner built around an ice chest. Garden-Watering A/C Air conditioners can dump hundreds of gallons of water each year. Homemade A/C The mastermind behind these instructions built an air conditioner to circumvent a rule in the office.

Cheap (Potentially Free) To Build Houses Theoretically, you could build any house for free, especially in a model such as the resource-based economy that participants in the Zeitgeist movement propose. Realistically, a dwelling could only be built for free to the degree that it was made from local materials. Therefore any design that involves imported materials will very likely have some level of financial (and ecological) cost attached to it in most instances, though as we will see throughout this chapter this is not necessarily so, as we can often use the detritus of industrialised society to produce the sustainable homes of the future. I will look at houses that could be built for free but are likely to cost something, even if it is a fraction of what you would spend on a modern bricks and mortar house. To keep costs to the absolute minimum, use your imagination and try to use what you have at hand, as much as you possibly can, in the construction process. Passive solar designs Earthships Earth bag construction Circular houses

Earth sheltering Earth sheltering is the architectural practice of using earth against building walls for external thermal mass, to reduce heat loss, and to easily maintain a steady indoor air temperature. Earth sheltering has become relatively more popular in modern times, especially among environmentalists and advocates of passive solar and sustainable architecture. However, the practice has been around for nearly as long as humans have been constructing their own shelters. Definition[edit] The expression earth-sheltering is a generic term, with the general meaning: building design in which soil plays an integral part. A building can be described as earth-sheltered if its external envelope is in contact with a thermally significant volume of soil or substrate (where “thermally significant” means making a functional contribution to the thermal effectiveness of the building in question.) There may be said to be three forms of earth-sheltered building: earth-coveredearth-bundedsubterranean Background[edit]

Free Plans Several free plans by Owen Geiger are now available: Preview the Economizer House Plan here.Economizer House Plan PDF Solar Pit House PDF Preview the Solar Pit House plan here. esert Shelters PDF Preview Desert Shelters by searching this phrase in the built-in search in the right hand column. Craftsman Bamboo/Plastic Bottle House PDF (Honorable Mention in Shelters for All housing competition) Preview the Craftsman plan here. oot Cellar Plan Earthbag House for Haiti View download complete complete plans at Teach Democracy.org. Want to see more plans? Earth Hands & Houses - Strawbale, earthbag and natural building courses Article about the history of earthbag building A Short History of Earthbag Building by Kelly Hart The idea of making walls by stacking bags of sand or earth has been around for at least a century. Originally sand bags were used for flood control and military bunkers because they are easy to transport to where they need to be used, fast to assemble, inexpensive, and effective at their task of warding off both water and bullets. At first natural materials such as burlap were used to manufacture the bags; more recently woven polypropylene has become the preferred material because of its superior strength. The burlap will actually last a bit longer if subjected to sunlight, but it will eventually rot if left damp, whereas polypropylene is unaffected by moisture. Because of this history of military and flood control, the use of sandbags has generally been associated with the construction of temporary structures or barriers. 1978, a prototype house using an earthquake-proof stacked-bag type of construction was built in Guatemala.