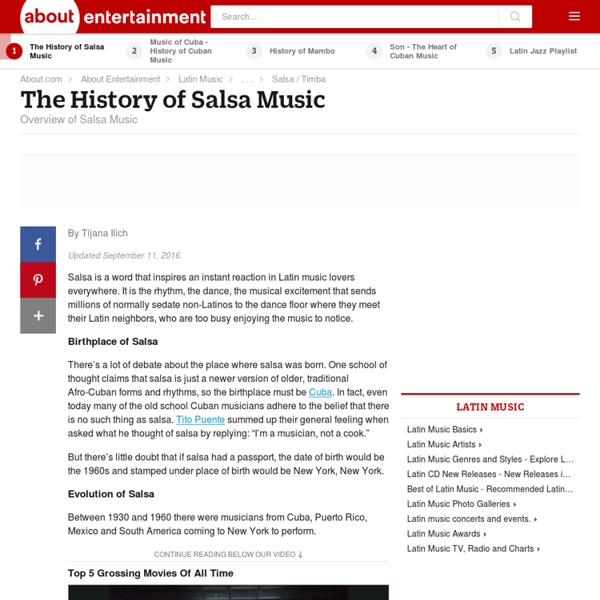 By Tijana Ilich Updated September 11, 2016. Salsa is a word that inspires an instant reaction in Latin music lovers everywhere. It is the rhythm, the dance, the musical excitement that sends millions of normally sedate non-Latinos to the dance floor where they meet their Latin neighbors, who are too busy enjoying the music to notice. Birthplace of Salsa There’s a lot of debate about the place where salsa was born. But there’s little doubt that if salsa had a passport, the date of birth would be the 1960s and stamped under place of birth would be New York, New York. Evolution of Salsa Between 1930 and 1960 there were musicians from Cuba, Puerto Rico, Mexico and South America coming to New York to perform. continue reading below our video They brought their own native rhythms and musical forms with them, but as they listened to each other and played music together, the musical influences mixed, fused and evolved. Of course, this musical hybridization was not a one-way street. The Name ‘Salsa’

Celia Cruz History of Salsa While some respected cuban music historians have popularized the myth that salsa originated in Cuba the earliest evidence of it was in the Puerto Rico with Rafael Cortijo and Ismael Rivera. Salsa started having as background the rich heritage of the Plena, the Afrocaribean form of music that that evolved in Puerto Rico and the influence of more melodic rhythms brought in and developed by mainline Puerto Rican musicians that lived in the United States during the 20's, 30's and 40's and began returning to Puerto Rico after the second world war. These arrivals not only gave the newer Puerto Rican musicians a rich treasure of sounds from all over Latin America, including the Cuban Son and the Guaracha, but also placed on them the responsibility of being creative before those that knew the difference between talent and gimmickry. It is here as in other times across the history of Cuba and Puerto Rico that music met. Cuban music was instrumental in the development of the salsa.

Key Instruments in Salsa Cuco Valoy In a career beginning in the 1950s and continuing into the present day, Cuco Valoy has known success singing son, salsa, merengue, bachata and bolero, in addition to playing and singing Afro-Dominican folk styles like palo. Not only has Valoy’s career run the gamut of Dominican musical forms, he has also seen the music from the vantage point of singer, percussionist, guitarist, producer, and even on-air disc jockey. Known chiefly as a vocalist, Valoy recorded both the rhythm guitar and the bongo for the son duo Los Ahijados which he fronted with his brother Martin, and often played piano or bass on his later merengue recordings. Valoy was born in 1937 in Mano Guayabo, near the capital of Santo Domingo. Cuco’s professional career started in the late 1950s with Los Ahijados ( The god-children), a traditional son group he formed with his brother Martin and named in response to the great Cuban duo Los Compadres (The Godfathers).

Havel Edward Havel Rhetoric of Reggae Research Paper Professor Alfred Snider (Tuna) Drums and Bass Guitar: The Foundation of Reggae Music Reggae is a style of music that needs a strong backbone and a strong driving force. The drums are one of the most important instruments in reggae music. The reggae drum set is essentially a compacted form of all African drum and percussion elements. ( This is Bob Marley and the Wailers playing a show. “Percussionist, Uziah "Sticky" Thompson keeps Ziggy's rhythm light and danceable” ( This is an example of what a percussion player’s set up may look like. Reggae drums have fairly flexible guidelines. Another style of drumming is called Rockers invented by drum and bass duo, Sly and Robbie. If you listen to variety of reggae songs, you will realize that the drums sound more or less the same. New bass guitar methods emerged with rock steady.

Salsa History - The history of salsa dancing and salsa music There is a lot to write about salsa history, but don't worry, we will keep it short and simple. Salsa is the result of a musical evolution of various types of Latin rhythms. Salsa is also a dance style which combines many different cultural genres. Salsa Music History Salsa music and salsa dancing are very much connected because the main purpose of the music is to dance to. The origin of salsa There exist an ongoing discussion on the exact origin of salsa. Salsa Dance History The term "Salsa" was created in New York. The term refers to a variety of Hispanic musical styles: Rhumba, Són Montuno, Guaracha, Mambo, Cha cha cha, Danzón, Són, Guguanco, Cubop, Guajira, Charanga, Cumbia, Plena, Bomba, Festejo, Merengue, among others. Many of these have maintained their individuality and others were mixed creating "Salsa". Celia Cruz From 'Salsa History' back to 'Homepage'.

History of Reggae - The Reggaskas Reggae is a term that was coined sometime close to 1960. Derived from rege-rege, a Jamaican phrase meaning “rags or ragged clothing,” it is used to denote a raggedy style of music that grew up in Jamaica around that time. Reggae is a genre of music that has its roots in a number of other musical styles. Reggae shares many characteristics with Ska, such as a walking bass line with guitar and piano off-beats, but Ska is faster paced and also tends to incorporates jazz-influenced horn riffs. Reggae music is recognisable thanks to its heavy backbeated rhythm. Early reggae music had lyrics consistent in theme with its predecessor, Rocksteady, with songs often focusing on topics such as love. Many of the words used in reggae songs are incomprehensible to US and UK English speakers, as they are taken from traditional Jamaican patois or refer to Rastafarian concepts – for example Jah, meaning God. Reggae began to rise to international acclaim as the 1970s progressed.

Salsa Instruments Salsa Instruments and the Salsa Band Since the advent of Rock'n'Roll, western pop bands have increasingly experimented with reducing the number of band members. Some top rock bands have counted as few as three musicians. Latin music has followed the opposite trend.