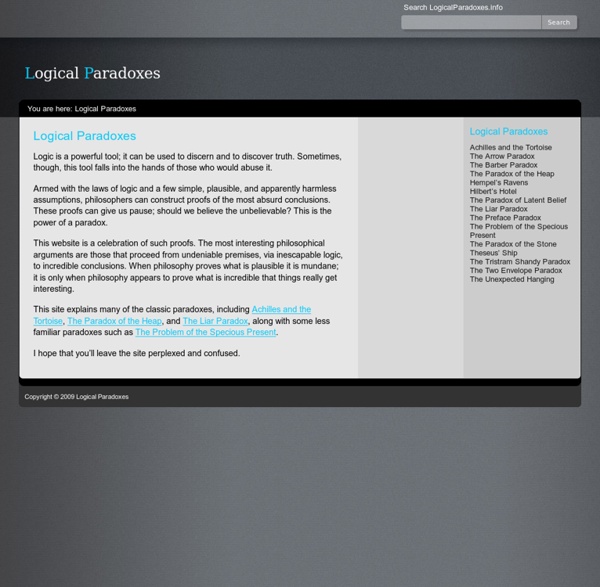 Logic is a powerful tool; it can be used to discern and to discover truth. Sometimes, though, this tool falls into the hands of those who would abuse it. Armed with the laws of logic and a few simple, plausible, and apparently harmless assumptions, philosophers can construct proofs of the most absurd conclusions. These proofs can give us pause; should we believe the unbelievable? This is the power of a paradox. This website is a celebration of such proofs.

Types of Reasoning Disciplines > Argument > Types of Reasoning Reasoning within an argument gives the rationale behind why one choice, for example should be selected over another. Types of reasoning include: Symbolic Logic Symbolic logic is the method of representing logical expressions through the use of symbols and variables, rather than in ordinary language. This has the benefit of removing the ambiguity that normally accompanies ordinary languages, such as English, and allows easier operation. There are many systems of symbolic logic, such as classical propositional logic, first-order logic and modal logic. Each may have seperate symbols, or exclude the use of certain symbols.

We're Underestimating the Risk of Human Extinction Unthinkable as it may be, humanity, every last person, could someday be wiped from the face of the Earth. We have learned to worry about asteroids and supervolcanoes, but the more-likely scenario, according to Nick Bostrom, a professor of philosophy at Oxford, is that we humans will destroy ourselves. Bostrom, who directs Oxford's Future of Humanity Institute, has argued over the course of several papers that human extinction risks are poorly understood and, worse still, severely underestimated by society. Some of these existential risks are fairly well known, especially the natural ones. But others are obscure or even exotic.

Lateral Thinking Puzzles Lateral thinking puzzles that challenge your preconceptions. 1. You are driving down the road in your car on a wild, stormy night, when you pass by a bus stop and you see three people waiting for the bus: 1. An old lady who looks as if she is about to die. 2. Do blind people hallucinate on LSD? I’ve just found a remarkable 1963 study [pdf] from the Archives of Opthalmology in which 24 blind participants took LSD to see if they could experience visual hallucinations. It turns out, they can, although this seems largely to be the case in blind people who had several years of sight to begin with, but who later lost their vision. Those blind from a very early age (younger than two years-old) did not report visual hallucinations, probably because they never had enough visual experience to shape a fully-functioning visual system when their brain was still developing. It is evident that a normal retina is not needed for the occurrence of LSD-induced visual experiences.

Defining Critical Thinking It entails the examination of those structures or elements of thought implicit in all reasoning: purpose, problem, or question-at-issue; assumptions; concepts; empirical grounding; reasoning leading to conclusions; implications and consequences; objections from alternative viewpoints; and frame of reference. Critical thinking — in being responsive to variable subject matter, issues, and purposes — is incorporated in a family of interwoven modes of thinking, among them: scientific thinking, mathematical thinking, historical thinking, anthropological thinking, economic thinking, moral thinking, and philosophical thinking. Critical thinking can be seen as having two components: 1) a set of information and belief generating and processing skills, and 2) the habit, based on intellectual commitment, of using those skills to guide behavior.

Science and Nonduality In this article standup philosopher Tim Freke articulates the nature of ‘paralogical’ thinking, which is the foundation of the philosophy and practices he shares to guide people to a ‘deep awake’ state. The need for paralogical thinking arises from an important insight. Life is profoundly paradoxical. I’ve already mentioned in passing the paradox that on the surface of life we live in a world of separate things, but at the depths all is one. At first such spiritual paradoxes can sound like mystical mumbo jumbo. So I want to ground our discussion of paradox in the empirical discoveries of hardnosed science, before using paralogical thinking to cast new light on the insights of spirituality.

8 Things About Concentrating “Music helps me concentrate,” Mike said to me glancing briefly over his shoulder. Mike was in his room writing a paper for his U.S. History class. Kurt Vonnegut at the Blackboard Voices in Time I want to share with you something I’ve learned. I’ll draw it on the blackboard behind me so you can follow more easily [draws a vertical line on the blackboard]. Responsible thinking web sites Critical Thinking sites: These sites discuss critical thinking and common errors in reasoning. The Critical Thinking Community While perhaps the most widely referenced site on critical thinking, the style of the above site is far too dry and academic for my taste.

10 Mind-Blowing Theories That Will Change Your Perception Of The World by Anna LeMind Reality is not as obvious and simple as we like to think. Some of the things that we accept as true at face value are notoriously wrong. The size of my problem thermometer We all encounter problems routinely. Some of them are caused by our own mistakes, such as sleeping through the alarm or missing a meeting. Some are caused by others, (a stolen wallet) and some are just bad luck (getting stuck in a traffic jam)! Just about everything we do throughout the day involves solving some kind of problem; it’s just an unavoidable fact of life. What we can do, however, is learn to manage our problems. This involves, in part, managing the emotions that arise when a problem occurs. Hell: Exothermic or Endothermic? 1, April 28, 2010 by jonathanturley This answer to a college chemistry exam was sent to me recently and restores my faith in the new generation of college students. The answer was purportedly in response to the bonus question on a University of Arizona chemistry midterm: “Is Hell exothermic (gives off heat) or endothermic (absorbs heat)?” Here is the student’s answer: