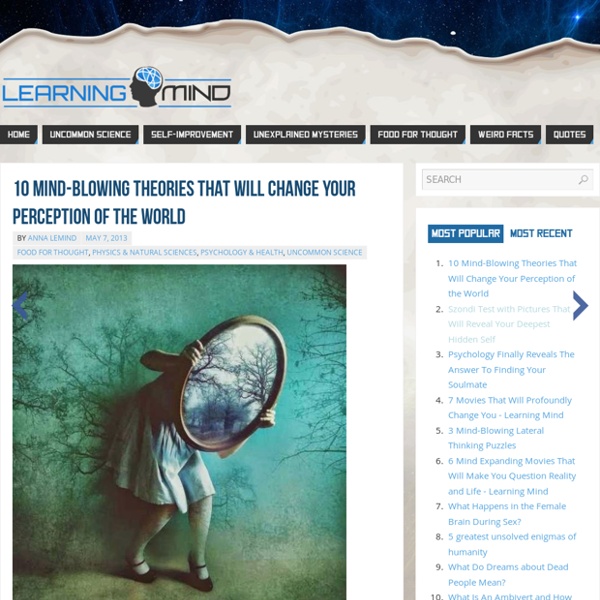 Reality is not as obvious and simple as we like to think. Some of the things that we accept as true at face value are notoriously wrong. Scientists and philosophers have made every effort to change our common perceptions of it. The 10 examples below will show you what I mean. 1. Great glaciation. Great glaciation is the theory of the final state that our universe is heading toward. 2. Solipsism is a philosophical theory, which asserts that nothing exists but the individual’s consciousness. Don’t you believe me? As a result, which parts of existence can we not doubt? 3. George Berkeley, the father of Idealism, argued that everything exists as an idea in someone’s mind. The idea being that if the stone really only exists in his imagination, he could not have kicked it with his eyes closed. 4. Everybody has heard of Plato. In addition to this stunning statement, Plato, being a monist, said that everything is made of a single substance. 5. 6. Enternalism is the exact opposite of presentism.

Top 10 Civilizations That Mysteriously Disappeared Throughout our history, most civilizations have either met a slow demise or were wiped out by natural disasters or invasion. But there are a few societies whose disappearance has scholars truly stumped: 10. The Olmec One of the first Mesoamerican societies, the Olmec inhabited the tropical lowlands of south-central Mexico. The first signs of the Olmec are around 1400 BC in the city of San Lorenzo, the main Olmec settlement which was supported by two other centers, Tenochtitlan and Potrero Nuevo. 50 Lessons I Wish I Had Learned Earlier [BLOG] Now that I’m old and gray (but not quite in my rocker yet!), I look back on my life and think about things I wish I knew earlier. It would have made my life so much easier if I knew then what I know now. Here’s my list of things I wish I could turn back the hands of time to tell my younger self. Maybe it’s not too late for you.

25 Websites that will make you look like a Genius 1. Khan Academy Have you ever wanted to pick up a subject you’re not well-versed in, but you didn’t have the money to invest in a college course? Khan Academy aims to provide education at the collegiate level for anyone who wants it. They provide resources for learning pretty much every subject out there, including math, science, history and more. As you learn, the platform will even assess your progress and help you gauge what you’ve learned.

How to plan a round-the-world trip - travel tips and articles Itʼs the ultimate trip: circumnavigating the planet, and stopping off wherever takes your fancy. Great for travellers who want to see it all, or who are just plain indecisive. But booking a round-the-world (RTW) trip can be a complex business. Hereʼs our guide to getting started. The Baader-Meinhof Phenomenon You may have heard about Baader-Meinhof Phenomenon before. In fact, you probably learned about it for the first time very recently. If not, then you just might hear about it again very soon. Baader-Meinhof is the phenomenon where one happens upon some obscure piece of information—often an unfamiliar word or name—and soon afterwards encounters the same subject again, often repeatedly. Anytime the phrase “That’s so weird, I just heard about that the other day” would be appropriate, the utterer is hip-deep in Baader-Meinhof.

UFOs and Aliens in Ancient Art Posted by theghostdiaries on Wednesday, November 14, 2012 · 1 Comment The earliest depictions of ancient aliens and UFOs are those carved on a mountain in Hunan, China. They are said to be dated 47,000 years old, which puts them in the time span of the Neanderthal man, predating Homo-sapiens. These paintings seem to suggest early encounters with unknown beings and, perhaps, visitations from extraterrestrials. The further back you go in time, the harder these art pieces become to interpret. Extraterrestrial depictions in paintings are an incredibly controversial topic among scientists and ancient alien theorists. 40 websites that will make you cleverer right now The indexed web contains an incredible 14 billion pages. But only a tiny fraction help you improve your brain power. Here are 40 of the best. whizzpast.com – Learn about our awe inspiring past all in one wonderful place. khanacademy.org – Watch thousands of micro-lectures on topics ranging from history and medicine to chemistry and computer science. freerice.com – Help end world hunger by correctly answering multiple-choice quizzes on a wide variety of subjects.

6 Logical Fallacies That Cost You Money Every Day Throws Good Money After Bad The competitive instinct is not just a phrase football commentators invented to give words to the tingly feeling they get watching Brett Favre play football. Our brain's natural tendency towards competition is arguably the reason your family survived the hunter gatherer knife fight of 2000 BC. And as countless uninspired armies and poorly coached teams have demonstrated throughout the years, your ability to compete tends to be directly proportional to your ability to convince yourself that you're doing the right thing. This leaves us with a brain that loves to compete, and is awesome at convincing itself that it's right. National Geographic Photo Contest 2011 - In Focus National Geographic is currently holding its annual photo contest, with the deadline for submissions coming up on November 30. For the past nine weeks, the society has been gathering and presenting galleries of submissions, encouraging readers to vote for them as well. National Geographic was kind enough to let me choose among its entries from 2011 for display here on In Focus.

100+ Documentaries To Expand Your Consciousness - Open Box Thinking - Open Box Thinking Free your mind & expand your awareness. Here is a list of over 100 documentaries you can watch for free online. They are about Science, Consciousness, ETs, you name it. It’s a smorgasbord of fascinating subjects to learn about. “If you find a video wrongly linked please let us know and we will find another to replace it.

The Flower of Life — World Mysteries Blog The flower of life holds a secret through which one can discover the most important and sacred pattern in the universe. This is the source of all that exists; it’s called the Fruit of Life. It contains 13 informational systems. Each one explains another aspect of reality. Thus these systems are able to give us access to everything ranging from the human body to the galaxies. In the first system, for example, it’s possible to create any molecular structure and any living cellular structure that exists in the universe. 30 Sentences that Can Brighten Your Day It’s far too easy to get lost in this lousy world. We always need reminders to get us back on track and moving forward. You don’t need an expensive life coach to empower you, sometimes one or two sentences are already enough to brighten your day and help you to spring forward to take on the challenges that will come during the day. We have 30 inspiring sentences that can empower and motivate you to look ahead.

Unintentionally Eating the Other Last Thursday, Crystal Renn, the model who recently appeared in a Vogue Japan spread with her eyes taped in ways that were suggestive of an old theater makeup trick meant to make white actors look “Asian,” offered an explanation and defense of the cosmetic practice. Tape, it should be noted, is only one of many tools in the arsenal of this particular form of racial drag, also known as yellowfacing – a practice that is literally older than America. Contrary to popular headlines suggesting that “yellowface is the new blackface,” there is nothing new or novel about yellowfacing. One of the earliest incidences of yellowfacing in the U.S. occurred in 1767 when Arthur Murphy presented his play The Orphan of China in Philadelphia. What interests me about this moment of racial drag or “transformation,” as Renn’s called it, are the reactions to it and her own explanation of the decision to tape her eyes. Here’s how Renn explains the eye-taping: