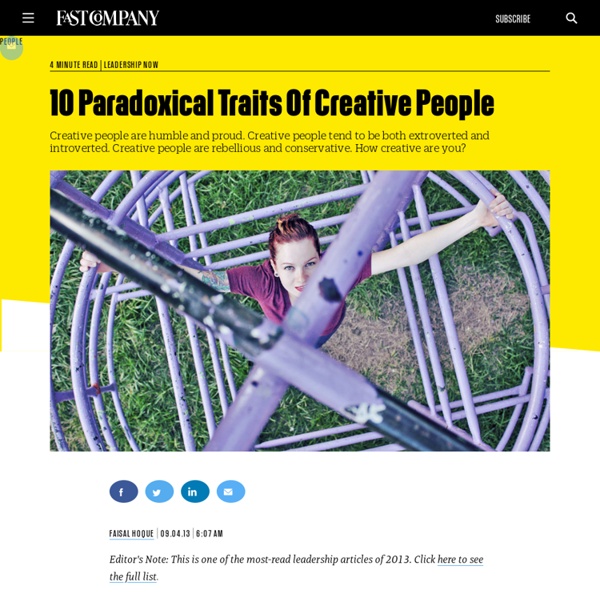 Editor's Note: This is one of the most-read leadership articles of 2013. Click here to see the full list. I frequently find myself thinking about whether I am an artist or an entrepreneur. I am simply trying my best to create my own unique path. It is safe to say that more and more entrepreneurs are artists, and artists of all kinds are entrepreneurs. Creativity is the common theme that drives both entrepreneurs and artists alike. Over this past Labor Day weekend, I found myself reading excerpts from distinguished professor of psychology and management Mihaly Csikszentmihalyi’s (pronounced me-HIGH chick-sent-me-HIGH-ee) seminal book Creativity: The Work and Lives of 91 Eminent People (HarperCollins, 1996). He writes: "I have devoted 30 years of research to how creative people live and work, to make more understandable the mysterious process by which they come up with new ideas and new things. 1. 2. 3. 5. 6. 7. 8. Without the passion, we soon lose interest in a difficult task. 10.

What Kids Think The Car Of The Future Should Look Like Is Awesome What does the car of the future look like? If you ask someone in the industry, they might start talking about what's next for self-driving cars. Ask a 10-year-old, on the other hand, and they might suggest cars that harvest drinking water from fog as they drive, or modular cars that join together to form public transportation. Those were a couple of the ideas from the Toyota Dream Car Art Contest, a global competition that asks kids to draw their vision of the "dream car of the future" each year. Some of the ideas are not so serious, like this banana space car from 6-year-old Parker Su of Taiwan: But others took creative approaches to solving actual problems. An 11-year-old designer came up with a car that 3-D-prints houses: Another reinvented the school bus, with individual cars that would be programmed to join together at a certain point to reduce traffic:

How Benedict Cumberbatch And Alan Turing Helped A Writer Find Success In Hollywood Austin Kleon on 10 Things Every Creative Person Should Remember But We Often Forget by Maria Popova What T.S. Eliot has to do with genetics and the optimal investment theory for your intellectual life. Much has been said about the secrets of creativity and where good ideas come from, but most of that wisdom can be lost on young minds just dipping their toes in the vast and tumultuous ocean of self-initiated creation. Some time ago, artist and writer Austin Kleon — one of my favorite thinkers, a keen observer of and participant in the creative economy of the digital age — was invited to give a talk to students, the backbone for which was a list of 10 things he wished he’d heard as a young creator: So widely did the talk resonate that Kleon decided to deepen and enrich its message in Steal Like an Artist — an intelligent and articulate manifesto for the era of combinatorial creativity and remix culture that’s part 344 Questions, part Everything is a Remix, part The Gift, at once borrowed and entirely original. The book opens with a timeless T.S. Donating = Loving

Ten words to cut from your writing As Mark Twain famously wrote, "I didn't have time to write a short letter, so I wrote a long one instead." His point? Strong writing is lean writing. When you want to make your writing more powerful, cut out words you don't need--such as the 10 included in this post: 1. 2. 3. 4. 5. More from Entrepreneur.com 6. 7. 8. 9. 10. Whether you've been writing for a few days or for many years, you'll benefit from evaluating the words you use. Copyright © 2013 Entrepreneur Media, Inc.

Too-ticky’s Guide to Life: Wisdom on Uncertainty, Presence, and Self-Reliance from Beloved Children’s Book Author Tove Jansson by Maria Popova “All things are so very uncertain, and that’s exactly what makes me feel reassured.” Tove Jansson (1914–2001) is among the most imaginative, important, and influential children’s book creators of all time, an artist and writer of unparalleled creative vision and great sensitivity to life’s ineffable nuances. A recipient of the prestigious Hans Christian Andersen Award, she had the courage to turn down Walt Disney and build her own creative empire. Tove Jansson in 1967 (photograph by Hans Gedda) Jansson’s singular sensibility springs from her own unusual life. Tove Jansson: self-portrait © Moomin Characters™ Moominvalley’s main protagonist, Moomintroll, is thus a self-portrait of sorts, but perhaps Jansson’s most interesting character is also the one based on the most intimate part of her life. Jansson and Pietilä crafting characters for the television adaptation of the Moomin series. It’s a song of myself… The refrain is about the things one can’t understand. Share on Tumblr

Susan Sontag on Writing by Maria Popova “There is a great deal that either has to be given up or be taken away from you if you are going to succeed in writing a body of work.” The newly released volume of Susan Sontag’s diaries, As Consciousness Is Harnessed to Flesh: Journals and Notebooks, 1964-1980 (public library), from whence Sontag’s thoughtful meditations on censorship and aphorisms came, is an absolute treasure trove of rare insight into one of the greatest minds in modern history. Among the tome’s greatest gifts are Sontag’s thoughts on the art, craft, and ideology of writing. Gathered here are the most compelling and profound of Sontag’s thoughts on writing, arranged chronologically and each marked with the date of the respective diary entry. I have a wider range as a human being than as a writer. Words have their own firmness. Writing is a little door. If only I could feel about sex as I do about writing! Kafka the last story-teller in ‘serious’ literature. I think I am ready to learn how to write.

Using Your 5 Senses To Jump-Start The Creative Process We don't work in a vacuum. Our environment feeds into the work we produce--particularly when that work is creative by nature. So how can you use all five senses to stimulate and maximize your creativity and focus? Sight: Sight might have the greatest impact on your state of mind while you're working. There's a link between light and cognitive performance. That said, if you're trying to get into a more creative zone, consider toning down your lighting. Lighting aside, designing your office space to include images and colors from nature-like greens and landscapes can also help give your creativity a boost. Sound: You may think perfect silence is the best condition to work under. While not quite as cool as sitting in a café corner with a latte and your laptop, listening to the app Coffitivity, which plays ambient coffee shop chatter on a constant loop can replicate that ideal noise backdrop for doing creative work. Touch: Taste: Smell:

Welcome to My Homepage! Christian Cawley Freelance Writer.Christian Cawley | Freelance Writer, Editor and Website Manager Coffitivity - Increase Your Creativity! 18 Things Highly Creative People Do Differently This list has been expanded into the new book, “Wired to Create: Unravelling the Mysteries of the Creative Mind,” by Carolyn Gregoire and Scott Barry Kaufman. Creativity works in mysterious and often paradoxical ways. Creative thinking is a stable, defining characteristic in some personalities, but it may also change based on situation and context. Inspiration and ideas often arise seemingly out of nowhere and then fail to show up when we most need them, and creative thinking requires complex cognition yet is completely distinct from the thinking process. Neuroscience paints a complicated picture of creativity. As scientists now understand it, creativity is far more complex than the right-left brain distinction would have us think (the theory being that left brain = rational and analytical, right brain = creative and emotional). While there’s no “typical” creative type, there are some tell-tale characteristics and behaviors of highly creative people. They daydream. They “fail up.”