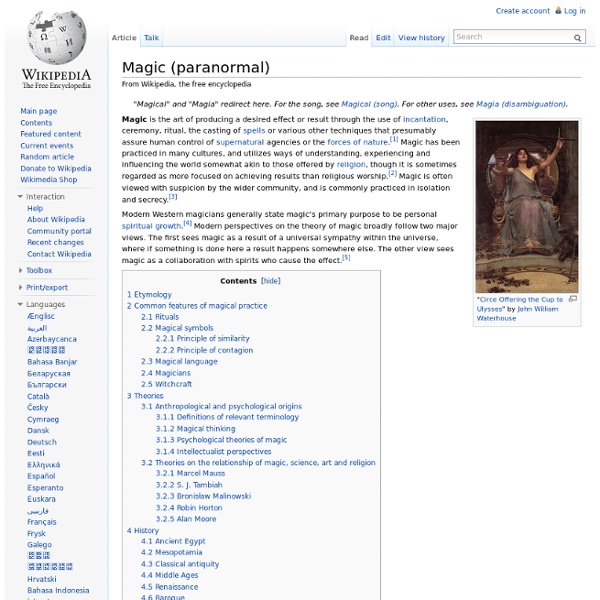 Magic or sorcery is an attempt to understand, experience and influence the world using rituals, symbols, actions, gestures and language.[1][2][3][4] Modern Western magicians generally state magic's primary purpose to be personal spiritual growth.[5] Modern theories of magic may see it as the result of a universal sympathy where some act can produce a result somewhere else, or as a collaboration with spirits who cause the effect.[6] The belief in and the practice of magic has been present since the earliest human cultures and continues to have an important religious and medicinal role in many cultures today.[7][8] Magic is often viewed with suspicion by the wider community, and is sometimes practiced in isolation and secrecy.[4] The word "magic" derives via Latin magicus from the Greek adjective magikos (μαγικός) used in reference to the "magical" arts of the Persian Magicians (Greek: magoi, singular mágos, μάγος), the Zoroastrian astrologer priests of the ancient Persian Empire.

A Simple Novel Outline – 9 questions for 25 chapters « H.E. Roulo Just as every tree is different but still recognizably a tree, every story is different but contains elements that make it a story. By defining those before you begin you clarify the scope of your work, identify your themes, and create the story you meant to write. At Norwescon 2011 I sat in on a session called Outline Your Novel in 90-minutes led by Mark Teppo. I’ll give you the brief, readable, synthesized version. Answer 9 questions and create 25 chapter titles and you’re there.

Magi Magi (/ˈmeɪdʒaɪ/; Latin plural of magus; Ancient Greek: μάγος magos; Old Persian: 𐎶𐎦𐎢𐏁 maguš, Persian: مُغ‎ mogh; English singular magian, mage, magus, magusian, magusaean; Kurdish: manji) is a term, used since at least the 6th century BC, to denote followers of Zoroastrianism or Zoroaster. The earliest known usage of the word Magi is in the trilingual inscription written by Darius the Great, known as the Behistun Inscription. Starting later, presumably during the Hellenistic period, the word Magi also denotes followers of what the Hellenistic chroniclers incorrectly associated Zoroaster with, which was – in the main – the ability to read the stars, and manipulate the fate that the stars foretold.[citation needed] However, Old Persian texts, pre-dating the Hellenistic period, refer to a Magus as a Zurvanic, and presumably Zoroastrian, priest. Pre-4th century BC usage[edit]

Witchcraft The belief in and the practice of magic has been present since the earliest human cultures and continues to have an important religious and medicinal role in many cultures today.[1] "Magic is central not only in 'primitive' societies but in 'high cultural' societies as well.. Thirteen Writing Prompts. [Originally published May 4, 2006.] Write a scene showing a man and a woman arguing over the man’s friendship with a former girlfriend. Do not mention the girlfriend, the man, the woman, or the argument. Write a short scene set at a lake, with trees and shit. Throw some birds in there, too. Black magic History[edit] Like its counterpart white magic, the origins of black magic can be traced to the primitive, ritualistic worship of spirits as outlined in Robert M. Place's 2009 book, Magic and Alchemy.[3] Unlike white magic, in which Place sees parallels with primitive shamanistic efforts to achieve closeness with spiritual beings, the rituals that developed into modern "black magic" were designed to invoke those same spirits to produce beneficial outcomes for the practitioner. Place also provides a broad modern definition of both black and white magic, preferring instead to refer to them as "high magic" (white) and "low magic" (black) based primarily on intentions of the practitioner employing them. He acknowledges, though, that this broader definition (of "high" and "low") suffers from prejudices as good-intentioned folk magic may be considered "low" while ceremonial magic involving expensive or exclusive components may be considered by some as "high magic", regardless of intent.[3]

Welcome to Bewitching Ways Please excuse the problems with the site. We ran into issues when loading it to the new server. We are working as quickly as possible to fix things. Thank you for your patience. "Ten thousand years, we've struck the fire Creation's music freely sung With magick joined, we've praised the stars Since the world first begun. Our spirit lives in timeless dance, The tarot and the runes And nights united in the power of Drawing Down the Moon." -- David O.