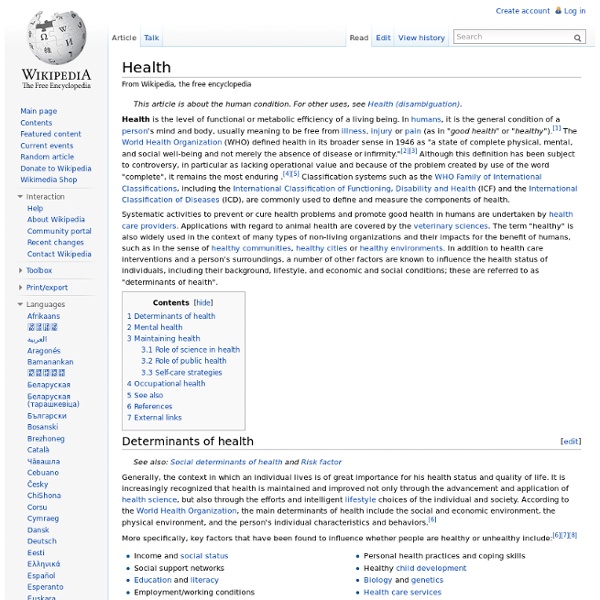 Health is the level of functional or metabolic efficiency of a living organism. In humans, it is the general condition of a person's mind and body, usually meaning to be free from illness, injury or pain (as in "good health" or "healthy").[1] The World Health Organization (WHO) defined health in its broader sense in 1946 as "a state of complete physical, mental, and social well-being and not merely the absence of disease or infirmity. Systematic activities to prevent or cure health problems and promote good health in humans are undertaken by health care providers. Determinants[edit] More specifically, key factors that have been found to influence whether people are healthy or unhealthy include the following:[9][10][11] The concept of the "health field," as distinct from medical care, emerged from the Lalonde report from Canada. The environment is often cited as an important factor influencing the health status of individuals. Overview of potential issues[edit] Mental health[edit] Diet[edit]

The Healing Power of Sound The History of Sound Healing Sound has been used as a healing force for thousands of years. All ancient civilizations used sound for healing. Traditional cultures still surviving today understand the remarkable healing power that lies in sound. In the Bible we are told that David played his harp to lift King Saul’s depression. Egyptian papyri over 2,600 years old refer to incantations as cures for infertility and rheumatic pain. The ancient Greeks believed music had the power to heal body and soul. Pythagoras used special songs and incantations with particular melodies and rhythms, to cure diseases of the body and mind.[1] What is Sound Healing? Sound healing is the therapeutic application of sound frequencies to the body/mind of a person with the intention of bringing them into a state of harmony and health. The French ear, nose and throat specialist Dr Alfred Tomatis has devoted the last 50 years to understanding the ear and its function. Resonance Scientific Research into Sound Wolfson 1.

Scientists Finally Admit There Is a Second, Secret DNA Code Which Controls Genes The fascinating and recent discovery of a new, second DNA code further lends credence to what metaphysical scientists have been saying for millennia — the body speaks two different languages. Since the genetic code was deciphered in the 1960s, researchers have assumed that it was used exclusively to write information about proteins. But biologists have suspected for years that some kind of epigenetic inheritance occurs at the cellular level. The different kinds of cells in our bodies provide an example. Skin cells and brain cells have different forms and functions, despite having exactly the same DNA. No Such Thing As Junk DNA The human genome is packed with at least four million gene switches that reside in bits of DNA that once were dismissed as “junk” but it turns out that so-called junk DNA plays critical roles in controlling how cells, organs and other tissues behave. The genetic code uses a 64-letter alphabet called codons. Controls Genes DNA Responds To Frequency

Neil deGrasse Tyson Believes In GMOs Biology History The objects of our research will be the different forms and manifestations of life, the conditions and laws under which these phenomena occur, and the causes through which they have been effected. The science that concerns itself with these objects we will indicate by the name biology [Biologie] or the doctrine of life [Lebenslehre]. Although modern biology is a relatively recent development, sciences related to and included within it have been studied since ancient times. Natural philosophy was studied as early as the ancient civilizations of Mesopotamia, Egypt, the Indian subcontinent, and China. However, the origins of modern biology and its approach to the study of nature are most often traced back to ancient Greece.[6] While the formal study of medicine dates back to Hippocrates (ca. 460 BC – ca. 370 BC), it was Aristotle (384 BC – 322 BC) who contributed most extensively to the development of biology. Foundations of modern biology Cell theory Main article: Cell theory Genetics

Imitation of Life Can a computer program reproduce everything that happens inside a living cell? Brian Hayes Almost 30 years ago, Harold J. Alternatively, this much DNA will code for about 600 proteins—which suggests that the logic of life can be written in 600 steps. There was one more intriguing element to Morowitz’s plan: At 600 steps, a computer model is feasible, and every experiment that can be carried out in the laboratory can also be carried out on the computer. Looking back on these proposals from the modern era of industrial-scale genomics and proteomics, there’s no doubt that Morowitz was right about the feasibility of collecting sequence data. As it happens, a computer program with exactly that goal was published last summer by Markus W. Bacteria of the genus Mycoplasma are attractive for experiments of this kind because they are the smallest and arguably the simplest self-replicating organisms. which doesn’t reveal much about what’s actually happening inside the cell.

New Technology to Capture, Convert Carbon Dioxide The intricate, highly porous structure of covalent organic frameworks makes them uniquely suited for capturing carbon dioxide. Although progress has been made in limiting carbon emissions in some countries, particularly in Europe and North America, it’s clear that finding ways to capture carbon dioxide from smokestacks—or from the atmosphere—is becoming increasingly imperative. Available systems dramatically increase the cost of electricity from plants equipped with the technology. And what to do with all that carbon dioxide after it’s separated remains problematic. Now a team of scientists at Lawrence Berkeley National Laboratory and the University of California, Berkeley, have devised a method that uses super-porous molecular structures known as covalent organic frameworks, with catalysts to convert the carbon dioxide to carbon monoxide, which can be used in making a range of materials including fuels, plastics, and even pharmaceuticals.

St Posh vs Bog Standard High: how the school system can fight poverty and privilege Opinion Updated Media player: "Space" to play, "M" to mute, "left" and "right" to seek. Error loading player: No playable sources found Video: Parents turn to education consultants to find a good private school for their child (Lateline) I often think that the greatest risk any of us take in our lifetime is to be born because none of us have any idea the circumstances into which we are going to arrive. And that is something it is vital to remember; no child is disadvantaged through their own doing. Poverty is still intergenerational in Australia and so, unfortunately, is privilege. Universal, secular, public education provided by taxpayers, open to all children regardless of their parentage, religion or circumstances remains the best mechanism any society has ever come up with for narrowing the gaps between kids and their opportunities. Poorer schools need more Public education and a well-functioning, robust democracy are indivisible. St Posh vs Bog Standard High My advice?