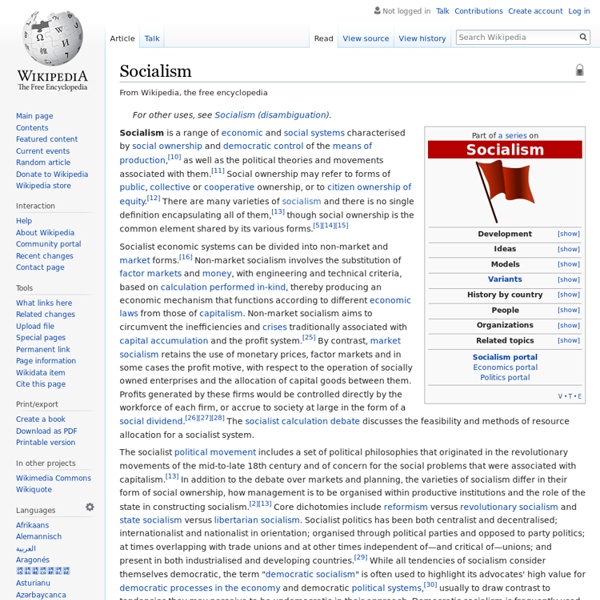 Socialism is a range of economic and social systems characterised by social ownership and democratic control of the means of production,[10] as well as the political theories and movements associated with them.[11] Social ownership may refer to forms of public, collective or cooperative ownership, or to citizen ownership of equity.[12] There are many varieties of socialism and there is no single definition encapsulating all of them,[13] though social ownership is the common element shared by its various forms.[5][14][15] Etymology The origin of the term "socialism" may be traced back and attributed to a number of originators, in addition to significant historical shifts in the usage and scope of the word. For Andrew Vincent, "[t]he word ‘socialism’ finds its root in the Latin sociare, which means to combine or to share. The term "socialism" was created by Henri de Saint-Simon, one of the founders of what would later be labelled "utopian socialism". History Early socialism Paris Commune Asia

Fascism Fascism (/ˈfæʃɪzəm/) is a form of radical authoritarian ultranationalism,[1][2] characterized by dictatorial power, forcible suppression of opposition and strong regimentation of society and of the economy,[3] which came to prominence in early 20th-century Europe.[4] The first fascist movements emerged in Italy during World War I before it spread to other European countries.[4] Opposed to liberalism, Marxism and anarchism, fascism is usually placed on the far-right within the traditional left–right spectrum.[5][6][7][4][8][9] Fascists saw World War I as a revolution that brought massive changes to the nature of war, society, the state and technology. The advent of total war and the total mass mobilization of society had broken down the distinction between civilians and combatants. Etymology Definitions John Lukacs, Hungarian-American historian and Holocaust survivor, argues that there is no such thing as generic fascism. Position in the political spectrum "Fascist" as a pejorative History

Feudalism Feudalism was a set of legal and military customs in medieval Europe that flourished between the 9th and 15th centuries. Broadly defined, it was a system for structuring society around relationships derived from the holding of land in exchange for service or labour. Although derived from the Latin word feodum or feudum (fief),[1] then in use, the term feudalism and the system it describes were not conceived of as a formal political system by the people living in the medieval period. In its classic definition, by François-Louis Ganshof (1944),[2] feudalism describes a set of reciprocal legal and military obligations among the warrior nobility, revolving around the three key concepts of lords, vassals and fiefs.[2] There is also a broader definition, as described by Marc Bloch (1939), that includes not only warrior nobility but all three estates of the realm: the nobility, the clerics and the peasantry bonds of manorialism; this is sometimes referred to as a "feudal society". Definition

Hannah Arendt Life and career[edit] Arendt was born into a secular family of German Jews in Linden (present-day Hanover), the daughter of Martha (born Cohn) and Paul Arendt.[7] She grew up in Königsberg (renamed Kaliningrad and annexed to the Soviet Union in 1946) and Berlin. At the University of Marburg, she studied philosophy with Martin Heidegger. According to Hans Jonas, her only German-Jewish classmate, Arendt embarked on a long and stormy romantic relationship with Heidegger, for which she later was criticized because of Heidegger's support for the Nazi Party when he was rector at the University of Freiburg. In the wake of one of their breakups, Arendt moved to Heidelberg, where she wrote her dissertation under the existentialist philosopher-psychologist Karl Jaspers on the concept of love in the thought of Saint Augustine. In 1929, in Berlin, she married Günther Stern, later known as Günther Anders. Paris[edit] New York[edit] Post-war[edit] Death[edit] Works[edit] The Origins of Totalitarianism[edit]