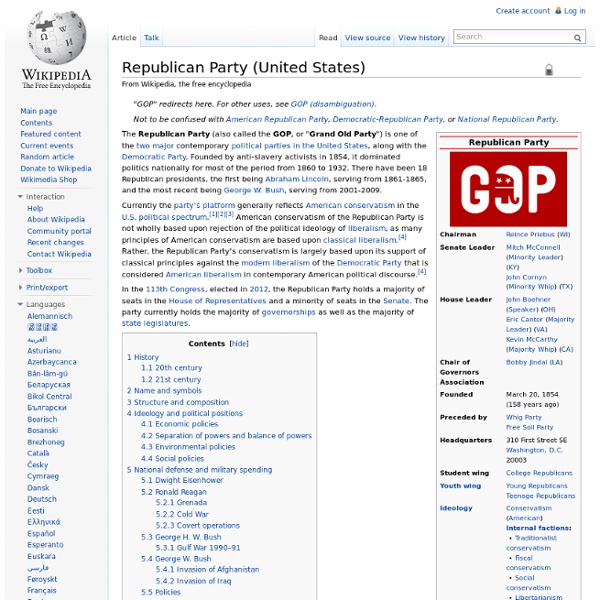 History Founding and 19th century The first official party convention was held on July 6, 1854, in Jackson, Michigan. By 1858, the Republicans dominated nearly all Northern states. The Republican Party first came to power in 1860 with the election of Lincoln to the Presidency and Republicans in control of Congress and again, the Northern states. It oversaw the saving of the union, the end of slavery, and the provision of equal rights to all men in the American Civil War and Reconstruction, 1861–1877.[16] The Republicans' initial base was in the Northeast and the upper Midwest. Early Republican ideology was reflected in the 1856 slogan "free labor, free land, free men", which had been coined by Salmon P. The GOP supported business generally, hard money (i.e., the gold standard), high tariffs to promote economic growth, high wages and high profits, generous pensions for Union veterans, and (after 1893) the annexation of Hawaii. 20th century Warren G. 21st century Electoral history

Democratic Party (United States) Since the 1930s, the party has promoted a social liberal platform.[2][11][12] Until the late 20th century the party had a powerful conservative and populist wing based in the rural South, which over time has greatly diminished. Today its Congressional caucus is composed mostly of progressives and centrists.[13] History The Democratic Party evolved from the Jeffersonian Republican or Democratic-Republican Party organized by Thomas Jefferson and James Madison in opposition to the Federalist party of Alexander Hamilton and John Adams. 1860s 1900s Agrarian Democrats demanding Free Silver overthrew the Bourbon Democrats in 1896 and nominated William Jennings Bryan for the presidency (a nomination repeated by Democrats in 1900 and 1908). Modern era Electoral history Name and symbols "A Live Jackass Kicking a Dead Lion" by Thomas Nast. The donkey party logo is still a well-known symbol for the Democratic Party, despite not being the official logo of the party.

United States The United States of America (USA)—commonly referred to as the United States (US), America or simply the States— is a federal republic[10][11] consisting of 50 states and a federal district. The 48 contiguous states and the federal district of Washington, D.C., are in central North America between Canada and Mexico. The state of Alaska is the northwestern part of North America and the state of Hawaii is an archipelago in the mid-Pacific. The country also has five populated and nine unpopulated territories in the Pacific and the Caribbean. At 3.79 million square miles (9.83 million km2) in total and with around 317 million people, the United States is the fourth-largest country by total area and third largest by population. Etymology The phrase "United States" was originally treated as plural, a description of a collection of independent states—e.g., "the United States are"—including in the Thirteenth Amendment to the United States Constitution, ratified in 1865. History Settlements

Scouting Leaders welcome a boy into Scouting, March 2010, Mexico City, Mexico. The two largest umbrella organizations are the World Organization of the Scout Movement (WOSM), for boys-only and co-educational organizations, and the World Association of Girl Guides and Girl Scouts (WAGGGS), primarily for girls-only organizations but also accepting co-educational organizations. The year 2007 marked the centenary of Scouting world wide, and member organizations planned events to celebrate the occasion. History[edit] Origins[edit] Three years later, in South Africa during the Second Boer War, Baden-Powell was besieged in the small town of Mafeking by a much larger Boer army (the Siege of Mafeking).[11] The Mafeking Cadet Corps was a group of youths that supported the troops by carrying messages, which freed the men for military duties and kept the boys occupied during the long siege. Growth[edit] Influences[edit]

What a Libertarian Is and Is Not What a Libertarian Is - and Is Notby Sam Wells A libertarian is a person - any person - who consistently advocates individual freedom and consistently opposes the initiation of the use of coercion by anyone upon the person or property of anyone else for any reason. (Coercion is here defined as any action taken by a human being against the will or without the permission of another human being with respect to his or her body or property. This includes murder, rape, kidnaping, assault, trespassing, burglary, robbery, arson and fraud.)

Youth Resources and Information Socialism Socialism is a range of economic and social systems characterised by social ownership and democratic control of the means of production,[10] as well as the political theories and movements associated with them.[11] Social ownership may refer to forms of public, collective or cooperative ownership, or to citizen ownership of equity.[12] There are many varieties of socialism and there is no single definition encapsulating all of them,[13] though social ownership is the common element shared by its various forms.[5][14][15] Etymology The origin of the term "socialism" may be traced back and attributed to a number of originators, in addition to significant historical shifts in the usage and scope of the word. For Andrew Vincent, "[t]he word ‘socialism’ finds its root in the Latin sociare, which means to combine or to share. The related, more technical term in Roman and then medieval law was societas. History Early socialism Paris Commune First International Second International Early 20th century

Utopia of Usurers G.K. Chesterton reveals the most quietly held secret of the Liberal System, the “liberty” instituted as the foundation of the System, is for the benefit of the few and for the gradual impoverishment and enslavement of the rest. If the phrase, “in vino veritas” has been exponentially validated through the long ages of mankind, I would venture to say that anger, tinged with wrath, an anger that is not artificial, but, rather, spontaneous, is another deep wellspring of truth. It is the gushing forth of that which is meant to cleanse or to sweep away. Such a manifestation of wrath, rarely tied to self-interest or petty ambition, is the most honest account of what a man is, a revelation of his inner capacity for nobility and heroism. Of course, the appearance of anger on an occasion when some great good is sullied or threatened is truly a sign that there has been a great patience at work in the mind of the man of wrath. The writer of the preface to G.K. 1. 2. 3. 4. 5. 6. 7.

The Money Masters ‘Fiat money’ or Gold Standard? Written by David A. Jones (Guest Author) on . Many people, upon first learning about ‘Fractional Reserve’ Banking, are drawn to the idea of the Gold Standard. They find out that ‘Fractional Reserve’ Banking leads to an inflating money supply, moreover one plagued by cycles of boom and bust due to its elasticity. They dislike this – they want money to work as a safe store of value by fixing its total supply. The Gold Standard is one way of doing this. Before we embark on a discussion of the pros and cons of a Gold Standard, I’d like to dispatch two monetary misconceptions commonly encountered on the internet: 1: I have put the words ‘fractional reserve’ in inverted commas because, like so many terms used in banking, it is a misnomer. With that out of the way, let’s proceed! “The first United States dollar was minted in 1794. A 'flowing hair dollar' minted in 1795 Why do supporters of the Gold Standard – sometimes referred to as ‘gold-bugs’ for short – want this kind of money?