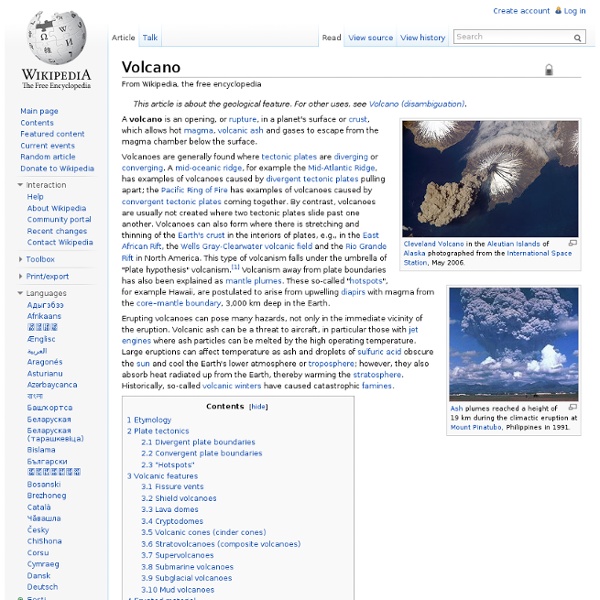 A 2007 eruptive column at Mount Etna producing volcanic ash, pumice and lava bombs Santa Ana Volcano, El Salvador, a close up aerial view of the nested summit calderas and craters, along with the crater lake as seen from a United States Air Force C-130 Hercules flying above El Salvador. Erupting volcanoes can pose many hazards, not only in the immediate vicinity of the eruption. One such hazard is that volcanic ash can be a threat to aircraft, in particular those with jet engines where ash particles can be melted by the high operating temperature; the melted particles then adhere to the turbine blades and alter their shape, disrupting the operation of the turbine. Large eruptions can affect temperature as ash and droplets of sulfuric acid obscure the sun and cool the Earth's lower atmosphere (or troposphere); however, they also absorb heat radiated up from the Earth, thereby warming the upper atmosphere (or stratosphere). Etymology Plate tectonics Divergent plate boundaries "Hotspots"

Convergent boundary Descriptions[edit] The nature of a convergent boundary depends on the type of plates that are colliding. Where a dense oceanic plate collides with a less-dense continental plate, the oceanic plate is typically thrust underneath because of the greater buoyancy of the continental lithosphere, forming a subduction zone. Where two continental plates collide the plates either buckle and compress or (in some cases) one plate delves called subduction, under the other. When two plates with oceanic crust converge, they typically create an island arc as one plate is subducted below the other. Not all plate boundaries are easily defined. Convergent margins[edit] A subduction zone is formed at a convergent plate boundary when one or both of the tectonic plates is composed of oceanic crust. An oceanic trench is found where the denser plate is subducted underneath the other plate. Some convergent margins have zones of active seafloor spreading behind the island arc, known as back-arc basins.

Tectonic Plates The edges of these plates, where they move against each other, are sites of intense geologic activity, such as earthquakes, volcanoes, and mountain building. Plate tectonics is a relatively new theory and it wasn't until the 1960's that Geologists, with the help of ocean surveys, began to understand what goes on beneath our feet. Where is the Evidence for Plate Tectonics? It is hard to imagine that these great big solid slabs of rock could wander around the globe. Scientists needed a clue as to how the continents drifted. Click here for the Scotland story Picture the following in your mind: You have a nine piece jigsaw (now there's a challenge). What do you think will happen to the puzzle? Now let's think back to our plates being created at the mid-ocean ridges, it seems to be a good idea but if this is the only type of plate movement then the world would get bigger and bigger. The floor of the Easter Pacific is moving towards South America at a rate of 9 centimetres per year.

Earth Floor: Plate Tectonics Convergent Boundaries Places where plates crash or crunch together are called convergent boundaries. Plates only move a few centimeters each year, so collisions are very slow and last millions of years. Even though plate collisions take a long time, lots of interesting things happen. For example, in the drawing above, an oceanic plate has crashed into a continental plate. Are They Dangerous Places to Live? On the other hand, earthquakes and volcanoes occurring in areas where few people live harm no one. Back | Next World Physical MapMaker Kit About This MapMaker Kit The World Physical MapMaker Kit maps includes a map without country boundaries, city names, and other political features. For a world map with country boundaries see the World Political MapMaker Kit. Download, print, and assemble maps of the physical world in a variety of sizes. The mega map occupies a large wall, or can be used on the floor. Download the MapMaker Kit Download the maps from the carousel above, or from the links below.