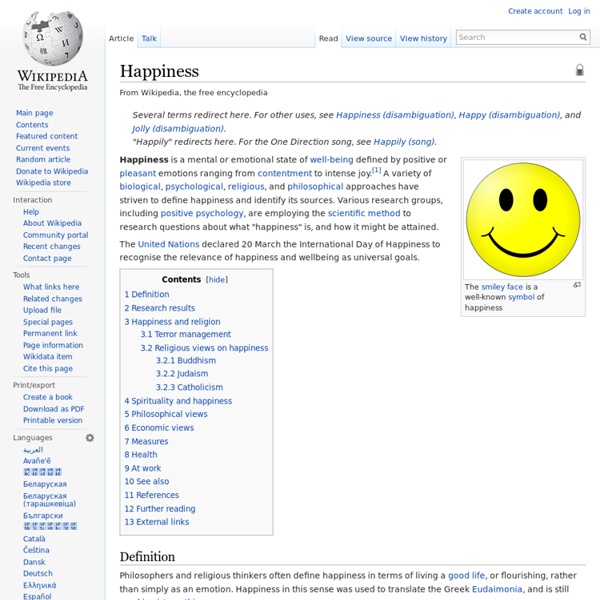 Happiness is a mental or emotional state of well-being defined by positive or pleasant emotions ranging from contentment to intense joy.[1] A variety of biological, psychological, religious, and philosophical approaches have striven to define happiness and identify its sources. Various research groups, including positive psychology, are employing the scientific method to research questions about what "happiness" is, and how it might be attained. The United Nations declared 20 March the International Day of Happiness to recognise the relevance of happiness and wellbeing as universal goals. Definition Philosophers and religious thinkers often define happiness in terms of living a good life, or flourishing, rather than simply as an emotion. Happiness is a fuzzy concept and can mean many different things to many people. Research results Meditation has been found to lead to high activity in the brain's left prefrontal cortex, which in turn has been found to correlate with happiness.[11] Buddhism Related:  Psychology

Quality of life Quality of life (QOL) is the general well-being of individuals and societies. QOL has a wide range of contexts, including the fields of international development, healthcare, politics and employment. Quality of life should not be confused with the concept of standard of living, which is based primarily on income. Overview[edit] Standard indicators of the quality of life include not only wealth and employment but also the built environment, physical and mental health, education, recreation and leisure time, and social belonging.[1][2] According to ecological economist Robert Costanza: While Quality of Life (QOL) has long been an explicit or implicit policy goal, adequate definition and measurement have been elusive. Identity and engagementCreativity and recreationMemory and projectionBelief and ideasGender and generationsEnquiry and learningWellbeing and health Also frequently related are concepts such as freedom, human rights, and happiness. Quantitative measurement[edit] Other measures[edit]

Achieve - Hipster (1940s subculture) Bing Crosby in 1942 In 1939, the word hepster was used by Cab Calloway in the title of his Hepster's Dictionary, which defines hep cat as "a guy who knows all the answers, understands jive". In 1944, pianist Harry Gibson modified this to hipster[2] in his short glossary "For Characters Who Don't Dig Jive Talk," published in 1944 with the album Boogie Woogie In Blue, featuring the self-titled hit "Handsome Harry the Hipster".[3] The entry for hipsters defined them as "characters who like hot jazz." In his book Jazz: A History (1977), Frank Tirro defines the 1940s hipster: To the hipster, Bird was a living justification of their philosophy. Marty Jezer, in The Dark Ages: Life in the United States 1945–1960 (1999), provides another definition: The hipster world that Kerouac and Ginsberg drifted in and out of from the mid-1940s to the early-1950s was an amorphous movement without ideology, more a pose than an attitude; a way of "being" without attempting to explain why.

Happy (Pharrell Williams song) "Happy" is a neo soul and funk song on which Williams' falsetto voice is comparable to Curtis Mayfield. The song has been highly successful, peaking at number one in the United States, United Kingdom, Australia, Ireland, New Zealand, and 19 other countries. It has sold over 1.3 million copies in the United Kingdom, and has reached the summit on three separate occasions, both records in their own right. On December 17, 2013, it was announced that Williams had signed to Columbia Records and would release his second studio album in 2014.[4] In December 2013, press release Rob Stringer, Chairman of Columbia Records, said, "When we excitedly partnered with Pharrell in January of this year, we felt it was his time again. The song received positive reviews from music critics. In New Zealand, "Happy" has become a phenomenal success. The 24-hour music video for "Happy" will be projected at the Buenos Aires International Festival of Independent Cinema in April 2014.[27] Recording[2] Personnel[2]

Stutterer (film) Greenwood, a lonely typographer, makes a phone call to discuss a bill issue, but his stutter keeps him from getting his words out and he is hung up on. Later, in a conversation with his online girlfriend Ellie on Facebook, Ellie says she has a surprise for Greenwood and will tell him the next day. The next day, Greenwood is at his father's home and his father is on the phone arguing with the company about communicating with his son about his bill. Ellie sends another message, sad that Greenwood has not replied. He begins to craft a response with a made up excuse as to why he can't meet her but changes his mind and doesn't reply. The next morning, Greenwood begins learning sign language, pretending to be deaf to avoid speaking, though in his head he clearly answers people and wishes he could talk to them. Once he arrives, standing across the street, he witnesses as a stranger attempts to speak to Ellie from behind.

Meritocracy Definitions[edit] Early definitions[edit] Supporters of meritocracies do not necessarily agree on the nature of "merit", however, they do tend to agree that "merit" itself should be a primary consideration during evaluation. In a more general sense, meritocracy can refer to any form of government based on achievement. This is in contrast to the term originally coined by Michael Young in 1958, who critically defined it as a system where "merit is equated with intelligence-plus-effort, its possessors are identified at an early age and selected for appropriate intensive education, and there is an obsession with quantification, test-scoring, and qualifications." [5] Meritocracy in its wider sense, may be any general act of judgment upon the basis of various demonstrated merits; such acts frequently are described in sociology and psychology. More recent definitions[edit] The most common form of meritocratic screening found today is the college degree. Etymology[edit] History[edit] Australia[edit]

Achieve - Reductionism Descartes held that non-human animals could be reductively explained as automata — De homine, 1662. Reductionism strongly reflects a certain perspective on causality. In a reductionist framework, the phenomena that can be explained completely in terms of relations between other more fundamental phenomena, are called epiphenomena. Often there is an implication that the epiphenomenon exerts no causal agency on the fundamental phenomena that explain it. Reductionism does not preclude the existence of what might be called emergent phenomena, but it does imply the ability to understand those phenomena completely in terms of the processes from which they are composed. This reductionist understanding is very different from that usually implied by the term 'emergence', which typically intends that what emerges is more than the sum of the processes from which it emerges. Religious reductionism generally attempts to explain religion by boiling it down to certain nonreligious causes. Types[edit]

This Wikipedia page provides a general overview of happiness, it's cultural and scientific history, and how it is measured. When the word "happiness" is searched on Google, this is often the first link that will pop up. While wikipedia maynot be seen as the most reliable source, it is imprtant to note that this is a commonly used method for basic background reseach into a topic. by brittanyacooper Feb 11