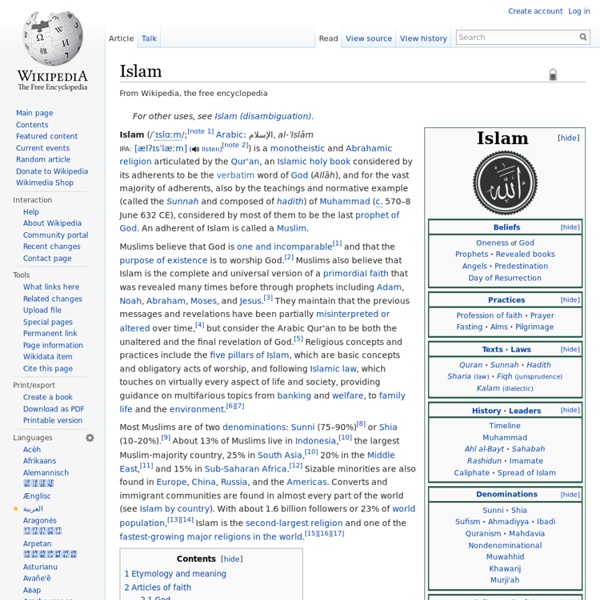 Islam (/ˈɪslɑːm/;[note 1] Arabic: الإسلام‎, al-ʾIslām IPA: [ælʔɪsˈlæːm] ( )[note 2]) is a monotheistic and Abrahamic religion articulated by the Qur'an, an Islamic holy book considered by its adherents to be the verbatim word of God (Allāh), and for the vast majority of adherents, also by the teachings and normative example (called the Sunnah and composed of hadith) of Muhammad (c. 570–8 June 632 CE), considered by most of them to be the last prophet of God. An adherent of Islam is called a Muslim. Most Muslims are of two denominations: Sunni (75–90%)[8] or Shia (10–20%).[9] About 13% of Muslims live in Indonesia,[10] the largest Muslim-majority country, 25% in South Asia,[10] 20% in the Middle East,[11] and 15% in Sub-Saharan Africa.[12] Sizable minorities are also found in Europe, China, Russia, and the Americas. Etymology and meaning Articles of faith God Main articles: God in Islam and Allah Islam's most fundamental concept is a rigorous monotheism, called tawḥīd (Arabic: توحيد‎). Angels

Cain and Abel in Islam Cain and Abel (Arabic: هابيل ,قابيل , Qabil and Habil) are believed by Muslims to have been the first two sons of Adam and Eve, although they are not mentioned by their names in the Quran. The story in the Qur'an[1] is virtually the same as the Hebrew Bible narrative, saying that both the brothers were asked to offer up individual sacrifices to God. God accepted Abel's sacrifice because of Abel's righteousness and Cain, out of jealousy, slew Abel. In the Qur'an[edit] Of Adam's first children, Cain was the elder son and Abel the younger. The innocent pleading and preaching of Abel had no effect upon Cain, for he was full of arrogance, pride and jealousy. Right after the murder took place, God sent a raven who scratched the ground to show Cain how to hide the body of dead person. Message[edit] References[edit] Jump up ^ Quran 5:27: "Recite to them the truth of the story of the two sons of Adam.

Taoism - Ageless Wisdom for a Modern World - Part 3 Taoism’s central organizing principle is the interconnectedness of all life with its flow of continuous change. Nowhere is this idea expressed in such a unique and exquisite manner as in the concept of yin-yang, which describes the underlying unity of life through the interplay of opposites. Taoist writings state that all things and all processes contain two primal energies or forces. From a Taoist point of view, however, these two polar opposites are not seen as distinctly separate or in conflict, but rather as interdependent and complementary. Chuang Tzu, another legendary Taoist sage, states with delightful wit and humor: "Everything can be a ‘that’; everything can be a ‘this.’ These two sages are telling us is that the seeming opposites of life - the "yes" and "no," the "good" and "bad," are merely expressions of a deeper underlying unity, the connectedness that characterizes life in all its forms and processes. "That which shrinks must first expand.

Christianity Christianity is an Abrahamic religion that began as a Jewish sect in the mid-1st century.[9][10] Originating in the Levant region of the Middle East, it quickly spread to Syria, Mesopotamia, Asia Minor and Egypt. It grew in size and influence over a few centuries, and by the end of the 4th century had become the official state church of the Roman Empire, replacing other forms of religion practiced under Roman rule.[11] During the Middle Ages, most of the remainder of Europe was Christianized, and adherents were gained in the Middle East, North Africa, Ethiopia and parts of India.[12][13] Following the Age of Discovery, Christianity spread to the Americas, Australasia, sub-Saharan Africa, and the rest of the world through missionary work and colonization.[14][15][16] Christianity has played a prominent role in the shaping of Western civilization.[17][18][19][20][21] Beliefs Creeds Its main points include: Ten Commandments These are quotes from Deuteronomy 6:4 and Leviticus 19:18.

Grounding – The Ultimate Healing Technique? The amount of barriers to healing is a long and sordid list, with a dirty food, water and air supply sitting at the top. Combine that with a poor relationship with the sun and the earth, and true healing becomes very difficult. However, if we can reignite our connection with the earth by grounding, we may find healing becomes a lot easier. What is grounding? Grounding, also known as earthing, is based on research showing that having a connection to the earth’s electrical energy promotes physical well-being. Turns out, its one of the core foundations for true health and an absolute requirement for healing the body. The pioneer and the science Clinton Ober, a recognized pioneer in the concept of earthing, knew that the earth’s surface is made up of negatively charged ions, which contain extra electrons. Ober finally received support in 2004, after many years of personal research, when the Journal of Alternative and Complimentary Medicine published one of his studies. Sources:

Ancient Judaism (book) Ancient Judaism, also known as Ancient Palestine: Society and Religion (German: Das antike Judentum), is a book written by Max Weber, a German economist and sociologist, in early the 20th century. The original edition was in German - the essays on Ancient Judaism appeared originally in the 1917–1919 issues of the Archiv fur Sozialwissenschaft und Sozialforschung. Marianne Weber, his wife, published the essays as Part Three of his Gesammelte Aufsatze zur Religionssoziologie' in 1920–1921. It was his fourth and last major work on the sociology of religion, after The Protestant Ethic and the Spirit of Capitalism, The Religion of China: Confucianism and Taoism and The Religion of India: The Sociology of Hinduism and Buddhism. Weber wrote that Weber notes that Judaism not only fathered Christianity and Islam, but was crucial to the rise of modern Occident state, as its influence were as important to those of Hellenistic and Roman cultures. Reinhard Bendix summarising the Weber work writes:

untitled Muhammad Names and appellations in the Quran Sources for Muhammad's life Quran A folio from an early Quran, written in Kufic script (Abbasid period, 8th–9th century). The Quran is the central religious text of Islam and Muslims believe that it represents the words of God revealed to Muhammad through the archangel Gabriel.[25][26][27] Although it mentions Muhammad directly only four times,[28][Quran 3:144][Quran 33:40][Quran 47:2][Quran 48:29] there are verses which can be interpreted as allusions to Muhammad's life.[14][n 4] The Quran however provides little assistance for a chronological biography of Muhammad, and many of the utterances recorded in it lack historical context.[29][30] Early biographies Next in importance are the historic works by writers of the 2nd and 3rd centuries of the Muslim era (AH – 8th and 9th century CE).[31] These include the traditional Muslim biographies of Muhammad (the sira literature), which provide additional information about Muhammad's life.[32] Hadith Life In Mecca

The Light of Egypt or the Science of the Soul and the Stars Judaism Judaism (from the Latin Iudaismus, derived from the Greek Ἰουδαϊσμός, and ultimately from the Hebrew יהודה, Yehudah, "Judah";[1][2] in Hebrew: יהדות, Yahadut, the distinctive characteristics of the Judean ethnos)[3] is the religion, philosophy and way of life of the Jewish people.[4] Judaism is a monotheistic religion, with the Torah as its foundational text (part of the larger text known as the Tanakh or Hebrew Bible), and supplemental oral tradition represented by later texts such as the Mishnah and the Talmud. Judaism is considered by religious Jews to be the expression of the covenantal relationship God established with the Children of Israel.[5] Judaism includes a wide corpus of texts, practices, theological positions, and forms of organization. Judaism claims a historical continuity spanning more than 3,000 years. Defining character and principles of faith Defining character Glass platter inscribed with the Hebrew word zokhreinu - remember us Core tenets 13 Principles of Faith:

untitled 9 Things You Didn't Know About The Prophet's Mosque Seeing a scene of impeccable beauty, we often hear the term “Heaven on Earth!” But there is only one place that literally has the right to proclaim itself heaven on Earth. There, deep in the mosque of the Prophet (masjid Nabawi), covered by green carpets and the tears of millions, lies a “garden from the gardens of paradise.” Mosque: 9. When the Ottomans introduced electricity to the Arabian Peninsula, the first place to be lit up was the mosque of the Prophet . 8. The current mosque is more than 100 times the size of the original building. , it now borders the precincts of the current mosque grounds. 7. room It has long been the stuff of legend that there is an “empty grave” next to where the Prophet , Abu Bakr and Umar are buried. when he returns is a matter of debate. 6. The majority of the old mosque, including the original mimbar of the Prophet , was destroyed in a fire that swept through the mosque centuries after the Prophet died. 5. For more than 650 years after the Prophet grave. . 4. 3.

Religion in ancient Rome The religion of Ancient Rome was polytheistic in origin, in line with religious traditions in wider Iron Age Europe. From an early time, however, the Roman Republic was strongly influenced by Hellenistic Greece, and much of the recorded religion of pre-Christian Rome is a syncretism of indigenous with Hellenistic religion. Roman religion was thus practical and contractual, based on the principle of do ut des, "I give that you might give." Religion depended on knowledge and the correct practice of prayer, ritual, and sacrifice, not on faith or dogma, although Latin literature preserves learned speculation on the nature of the divine and its relation to human affairs. Even the most skeptical among Rome's intellectual elite such as Cicero, who was an augur, saw religion as a source of social order. For ordinary Romans, religion was a part of daily life.[1] Each home had a household shrine at which prayers and libations to the family's domestic deities were offered. Roman deities[edit]

Salam to all.
we are started a online store for kids ......... can easily learn by our Islamic resources we deal all kinds of islamic thing for kids. for more detail you can viit our website.
by ilmahkids Apr 26