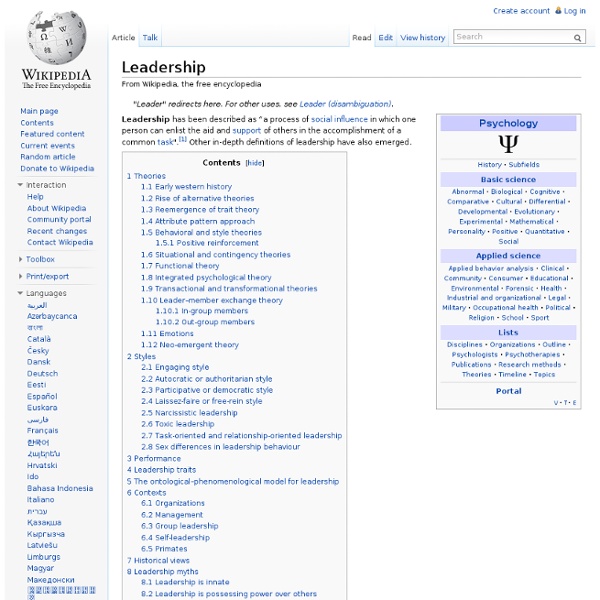 Theories[edit] Early western history[edit] The trait theory was explored at length in a number of works in the 19th century. Most notable are the writings of Thomas Carlyle and Francis Galton, whose works have prompted decades of research.[4] In Heroes and Hero Worship (1841), Carlyle identified the talents, skills, and physical characteristics of men who rose to power. In Galton's Hereditary Genius (1869), he examined leadership qualities in the families of powerful men. After showing that the numbers of eminent relatives dropped off when moving from first degree to second degree relatives, Galton concluded that leadership was inherited. Rise of alternative theories[edit] In the late 1940s and early 1950s, however, a series of qualitative reviews of these studies (e.g., Bird, 1940;[5] Stogdill, 1948;[6] Mann, 1959[7]) prompted researchers to take a drastically different view of the driving forces behind leadership. Reemergence of trait theory[edit] Attribute pattern approach[edit] B.F.

Implementing Strategies in Extreme Negotiations Download the PDF of this Idea in Practice. In November 2010, Jeff Weiss and Jonathan Hughes, along with Major Aram Donigian, published an article in HBR called "Extreme Negotiations." It described the temptations we all face when negotiating under duress—for example, acting too quickly or relying too much on coercion—and suggested that the principles of effective negotiation become even more important when the stakes are high and the pressure is on. The authors used examples from military negotiations in Iraq and Afghanistan to illustrate those principles. We followed up with Weiss and Hughes to understand more about how readers could apply these negotiating principles to their own situations. HBR: In a business context, what do you define as an "extreme" negotiation? Weiss and Hughes: It's when the stakes and risks are especially high. Remind us of what the principles are. Do these strategies need to be reciprocated to be effective? W & H: No, although that is a very common concern.

Napoleon Hill Napoleon Hill (October 26, 1883 – November 8, 1970) was an American author in the area of the new thought movement who was one of the earliest producers of the modern genre of personal-success literature. He is widely considered to be one of the great writers on success.[1] His most famous work, Think and Grow Rich (1937), is one of the best-selling books of all time (at the time of Hill's death in 1970, Think and Grow Rich had sold 20 million copies).[2] Hill's works examined the power of personal beliefs, and the role they play in personal success. He became an advisor to President Franklin D. Life and works[edit] Napoleon Hill was born in a one-room cabin near the Appalachian town of Pound, in Southwest Virginia.[5] Hill's mother died when he was nine years old, and his father remarried two years later. Influence of Andrew Carnegie (1836–1919)[edit] As part of his research, Hill claimed to have interviewed many of the most successful people of the time in the United States.

Excellence Now by Tom Peters Neuro-linguistic programming Not to be confused with Natural language processing (also NLP) Neuro-linguistic programming (NLP) is an approach to communication, personal development, and psychotherapy created by Richard Bandler and John Grinder in California, United States in the 1970s. Its creators claim a connection between the neurological processes ("neuro"), language ("linguistic") and behavioral patterns learned through experience ("programming") and that these can be changed to achieve specific goals in life.[1][2] Bandler and Grinder claim that the skills of exceptional people can be "modeled" using NLP methodology, then those skills can be acquired by anyone.[3][4][5][6][7] Bandler and Grinder also claim that NLP can treat problems such as phobias, depression, habit disorder, psychosomatic illnesses, myopia,[8] allergy, common cold,[9] and learning disorders, often in a single session.[10][11][12][13] NLP has been adopted by some hypnotherapists and in seminars marketed to business and government.[14][15]

Saving An Iconic Brand: Five Ways Alan Mulally Changed Ford’s Culture Alan Mulally is credited with saving Ford Motor Company--and doing it without the taxpayer’s money. But what he really did was save Ford from itself. In the American automobile industry, Ford was notorious for its caustic corporate culture. Executives put their own advancement and the success of their own departments ahead of the bottom line. The company was divided into warring fiefdoms. Different sets of data were used to make different points to different constituencies. Applying the same methods he had used to save Boeing after the terrorist attacks of September 11, 2001 annihilated its order book, Mulally transformed this short-sighted, cutthroat, careerist culture into a model of collaboration and efficiency. Forcing everyone to “join the team” Before Mulally arrived in Dearborn, Ford meetings were arenas of mortal combat. Insisting on a rigorous reliance on the facts At pre-Mulally Ford, the truth came in many different flavors. Creating one Ford But Mulally’s plan was different.

HumanMetrics - online relationships, personality and entrepreneur tests, personal solution center 6 Habits of True Strategic Thinkers In the beginning, there was just you and your partners. You did every job. You coded, you met with investors, you emptied the trash and phoned in the midnight pizza. Now you have others to do all that and it's time for you to "be strategic." Whatever that means. If you find yourself resisting "being strategic," because it sounds like a fast track to irrelevance, or vaguely like an excuse to slack off, you're not alone. This is a tough job, make no mistake. After two decades of advising organizations large and small, my colleagues and I have formed a clear idea of what's required of you in this role. Anticipate Most of the focus at most companies is on what’s directly ahead. Look for game-changing information at the periphery of your industrySearch beyond the current boundaries of your businessBuild wide external networks to help you scan the horizon better Think Critically “Conventional wisdom” opens you to fewer raised eyebrows and second guessing. Interpret Ambiguity is unsettling. Decide

Stephen Covey Stephen Richards Covey (October 24, 1932 – July 16, 2012) was an American educator, author, businessman, and keynote speaker. His most popular book was The Seven Habits of Highly Effective People. His other books include First Things First, Principle-Centered Leadership, The Seven Habits of Highly Effective Families, The 8th Habit, and The Leader In Me — How Schools and Parents Around the World Are Inspiring Greatness, One Child at a Time. He was a professor at the Jon M. Early life[edit] Covey was born to Stephen Glenn Covey and Irene Louise Richards Covey in Salt Lake City, Utah, on October 24, 1932.[1] Louise was the daughter of Stephen L Richards, an apostle and counselor in the first presidency of The Church of Jesus Christ of Latter-day Saints under David O. Covey was athletic as a youth but contracted slipped capital femoral epiphysis in junior high school, requiring him to change his focus to academics. Education[edit] Books[edit] The 7 Habits of Highly Effective People[edit]

Bad to great: The path to scaling up excellence Leaders who aim to boost organizational performance often start with efforts to kindle good behavior, however they define it. Yet case studies and rigorous academic research show that if you want to create and spread excellence, eliminating the negative is the first order of business. Destructive behavior—selfishness, nastiness, fear, laziness, dishonesty—packs a far bigger wallop than constructive behavior. Organizational researcher Andrew Miner and colleagues, for example, measured the moods of 41 employees at random intervals throughout the workday. The researchers discovered that negative interactions with bosses and coworkers had five times more impact on employees’ moods than positive interactions. Video Scaling up excellence: An interview with Bob Sutton Sutton discusses companies that have scaled up excellence and explains their success. Play video Efforts to scale up excellence stall when bad behavior crowds out good. Negative actions and beliefs also come in different flavors.