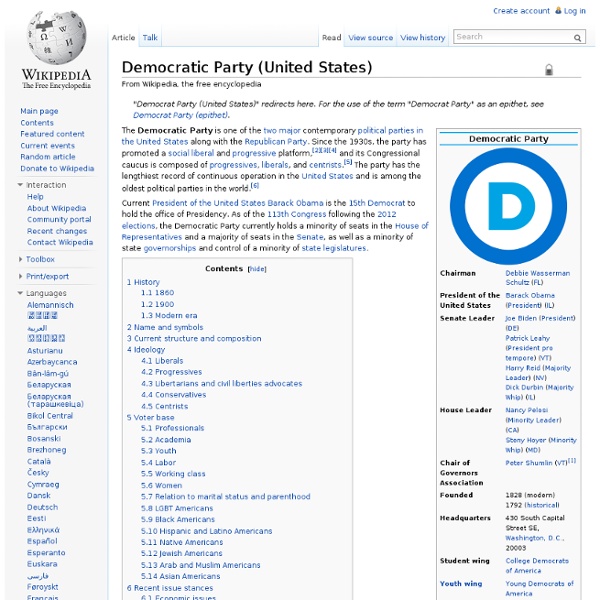 Since the 1930s, the party has promoted a social liberal platform.[2][11][12] Until the late 20th century the party had a powerful conservative and populist wing based in the rural South, which over time has greatly diminished. Today its Congressional caucus is composed mostly of progressives and centrists.[13] History The Democratic Party evolved from the Jeffersonian Republican or Democratic-Republican Party organized by Thomas Jefferson and James Madison in opposition to the Federalist party of Alexander Hamilton and John Adams. The party favored republicanism, a weak federal government, states' rights, agrarian interests (especially Southern planters) and strict adherence to the Constitution; it opposed a national bank, close ties to Great Britain, and business and banking interests. The Party came to power in the election of 1800. 1860s 1900s Modern era Electoral history Name and symbols "A Live Jackass Kicking a Dead Lion" by Thomas Nast. Related:  Common connotations of BLUE

FedStats Truth Truth is most often used to mean being in accord with fact or reality,[1] or fidelity to an original or to a standard or ideal.[1] The commonly understood opposite of truth is falsehood, which, correspondingly, can also take on a logical, factual, or ethical meaning. The concept of truth is discussed and debated in several contexts, including philosophy and religion. Many human activities depend upon the concept, where its nature as a concept is assumed rather than being a subject of discussion; these include most (but not all) of the sciences, law, and everyday life. Definition and etymology[edit] An angel carrying the banner of "Truth", Roslin, Midlothian Thus, 'truth' involves both the quality of "faithfulness, fidelity, loyalty, sincerity, veracity",[6] and that of "agreement with fact or reality", in Anglo-Saxon expressed by sōþ (Modern English sooth). All Germanic languages besides English have introduced a terminological distinction between truth "fidelity" and truth "factuality".

Republican Party (United States) History Founding and 19th century The first official party convention was held on July 6, 1854, in Jackson, Michigan. By 1858, the Republicans dominated nearly all Northern states. The Republicans' initial base was in the Northeast and the upper Midwest. Early Republican ideology was reflected in the 1856 slogan "free labor, free land, free men", which had been coined by Salmon P. The GOP supported business generally, hard money (i.e., the gold standard), high tariffs to promote economic growth, high wages and high profits, generous pensions for Union veterans, and (after 1893) the annexation of Hawaii. Nevertheless, by 1890 the Republicans had agreed to the Sherman Antitrust Act and the Interstate Commerce Commission in response to complaints from owners of small businesses and farmers. After the two terms of Democrat Grover Cleveland, the election of William McKinley in 1896 is widely seen as a resurgence of Republican dominance and is sometimes cited as a realigning election.

Scouting Leaders welcome a boy into Scouting, March 2010, Mexico City, Mexico. The two largest umbrella organizations are the World Organization of the Scout Movement (WOSM), for boys-only and co-educational organizations, and the World Association of Girl Guides and Girl Scouts (WAGGGS), primarily for girls-only organizations but also accepting co-educational organizations. The year 2007 marked the centenary of Scouting world wide, and member organizations planned events to celebrate the occasion. History[edit] Origins[edit] Three years later, in South Africa during the Second Boer War, Baden-Powell was besieged in the small town of Mafeking by a much larger Boer army (the Siege of Mafeking).[11] The Mafeking Cadet Corps was a group of youths that supported the troops by carrying messages, which freed the men for military duties and kept the boys occupied during the long siege. Growth[edit] Influences[edit]

Calm From Wikipedia, the free encyclopedia CALM may refer to: Organisations Science/medicine terms Café-Au-Lait Macules ("spots") as seen in the medical condition neurofibromatosisCommunications, Air-interface, Long and Medium range, a standardized set of air interface protocols and parameters for medium and long range, high speed ITS communicationClathrin-assembly lymphoid myeloid leukaemia protein, a ubiquitous form of the AP180 clathrin adaptor protein in the synaptic vesicles of mammals Legislation Commercial Advertisement Loudness Mitigation Act, U.S. legislation prohibiting TV commercials from being louder than the program on which they are shown.Cliff Alleviation at the Last Minute Act, U.S. legislation introduced to ease problems related to the fiscal cliff Other uses The NASDAQ ticker for Cal-Maine Foods, Inc.