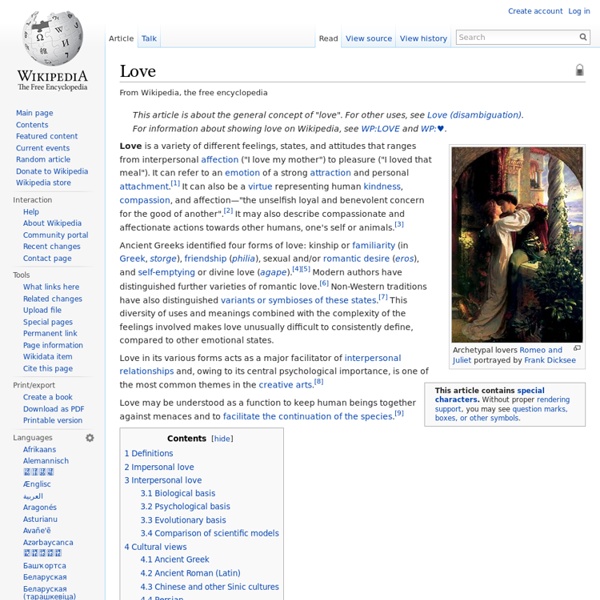 For information about showing love on Wikipedia, see WP:LOVE and WP:♥. Love in its various forms acts as a major facilitator of interpersonal relationships and, owing to its central psychological importance, is one of the most common themes in the creative arts.[8] Love may be understood as a function to keep human beings together against menaces and to facilitate the continuation of the species.[9] Definitions The word "love" can have a variety of related but distinct meanings in different contexts. Many other languages use multiple words to express some of the different concepts that in English are denoted as "love"; one example is the plurality of Greek words for "love" which includes agape and eros.[10] Cultural differences in conceptualizing love thus doubly impede the establishment of a universal definition.[11] Although the nature or essence of love is a subject of frequent debate, different aspects of the word can be clarified by determining what isn't love (antonyms of "love").

Cowardice Cowardice is a trait wherein fear and excess self-concern override doing or saying what is right, good and of help to others or oneself in a time of need—it is the opposite of courage. As a label, "cowardice" indicates a failure of character in the face of a challenge.[1] Etymology[edit] Seven generation sustainability Seven generation sustainability is an ecological concept that urges the current generation of humans to live sustainably and work for the benefit of the seventh generation into the future.[citation needed] It originated[citation needed] with the Iroquois - Great Law of the Iroquois - which holds appropriate to think seven generations ahead (about 140 years into the future) and decide whether the decisions they make today would benefit their children seven generations into the future. "In every deliberation, we must consider the impact on the seventh generation... even if it requires having skin as thick as the bark of a pine."

Sharing Sharing food Sharing is the joint use of a resource or space. In its narrow sense, it refers to joint or alternating use of an inherently finite good, such as a common pasture or a shared residence. It is also the process of dividing and distributing. Love of God Love of God can mean either love for God or love by God. Love for God (philotheia) is associated with the concepts of piety, worship, and devotions towards God.[1] Love by God for human beings (philanthropia) is lauded in Lamentations 3:22: "The steadfast love of God endures all the day"; Psalm 52:8: "I trust in the steadfast love of God forever and ever"; Romans 8:39: "Nor height nor depth, nor anything else in all creation, will be able to separate us from the love of God"; 2 Corinthians 13:14: "The grace of the Lord Jesus Christ and the love of God and the fellowship of the Holy Spirit be with you all"; 1 John 4:9: "In this the love of God was made manifest among us, that God sent his only Son into the world, so that we might live through him"; etc. The Greek term agape is applied both to the love that human beings have for God and to the love that God has for man.[8] Bahá'í Faith[edit]

Passion (emotion) The term is also often applied to a lively or eager interest in or admiration for a proposal, cause, or activity or love – to a feeling of unusual excitement, enthusiasm or compelling emotion, a positive affinity or love, towards a subject. It is particularly used in the context of romance or sexual desire though it generally implies a deeper or more encompassing emotion than that implied by the term lust. The recent concerns of emotional intelligence have been to find a synthesis of the two forces—something that "turns the old understanding of the tension between reason and feeling on its head: it is not that we want to do away with emotion and put reason in its place, as Erasmus had it, but instead find the intelligent balance of the two".[5] A tension or dialectic between marriage and passion can be traced back in Western society at least as far as the Middle Ages, and the emergence of the cult of courtly love. Passion and desire go hand in hand, especially as a motivation.

Animal Crossing Four Animal Crossing games have been released worldwide, one each for the Nintendo GameCube, Nintendo DS, Wii, and the Nintendo 3DS. The series has been both critically and commercially successful and has sold 23.711 million units worldwide.[1][2][3][4] Gameplay[edit] 52 Weeks To Preparedness Wed Apr 23 20:12 By Mort Amsel (Reporter)Contributor profile | More stories 52 Weeks To Preparedness Monday, March 4, 2013 7:55 % of readers think this story is Fact. Add your two cents.