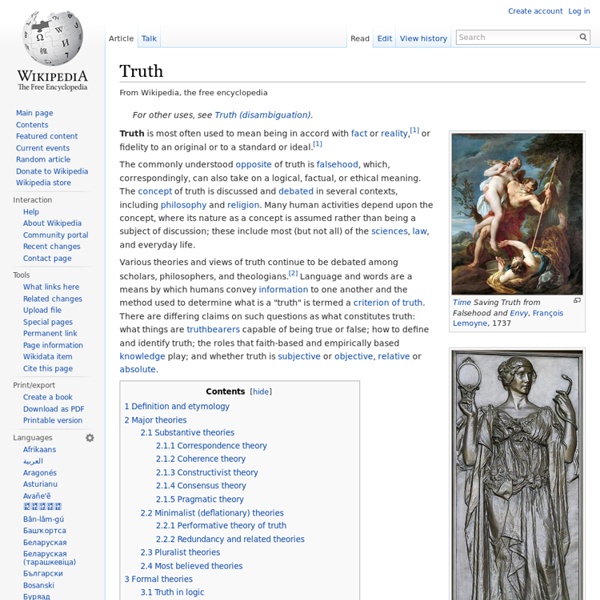 Truth is most often used to mean being in accord with fact or reality,[1] or fidelity to an original or to a standard or ideal.[1] The commonly understood opposite of truth is falsehood, which, correspondingly, can also take on a logical, factual, or ethical meaning. The concept of truth is discussed and debated in several contexts, including philosophy and religion. Many human activities depend upon the concept, where its nature as a concept is assumed rather than being a subject of discussion; these include most (but not all) of the sciences, law, and everyday life. Definition and etymology[edit] An angel carrying the banner of "Truth", Roslin, Midlothian Thus, 'truth' involves both the quality of "faithfulness, fidelity, loyalty, sincerity, veracity",[6] and that of "agreement with fact or reality", in Anglo-Saxon expressed by sōþ (Modern English sooth). All Germanic languages besides English have introduced a terminological distinction between truth "fidelity" and truth "factuality". Related:  Common connotations of BLUE

Belief Belief is a mental representation, treated in various academic disciplines, especially philosophy and psychology, of a sentient being's attitude toward the likelihood or truth of something.[1] From Greek two different concepts are often represented by the concept of belief: Pistis and Doxa. Simplified we may say that the first deals in trust and confidence, the latter in opinion and acceptance. Knowledge and epistemology[edit] The terms belief and knowledge are used differently in philosophy. As a psychological phenomenon[edit] Mainstream psychology and related disciplines have traditionally treated belief as if it were the simplest form of mental representation and therefore one of the building blocks of conscious thought. The concept of belief presumes a subject (the believer) and an object of belief (the proposition). This has important implications for understanding the neuropsychology and neuroscience of belief. Belief-in[edit] Belief-that, delusion[edit] Formation[edit] Desirability

Meaning of life Questions Questions about the meaning of life have been expressed in a broad variety of ways, including the following: What is the meaning of life? Philosopher in Meditation (detail) by RembrandtWhy are we here? These questions have resulted in a wide range of competing answers and arguments, from scientific theories, to philosophical, theological, and spiritual explanations. Scientific inquiry and perspectives Many members of the scientific community and philosophy of science communities think that science can provide the relevant context, and set of parameters necessary for dealing with topics related to the meaning of life. Psychological significance and value in life Neuroscience describes reward, pleasure, and motivation in terms of neurotransmitter activity, especially in the limbic system and the ventral tegmental area in particular. Experimental philosophy and neuroethics research collects data about human ethical decisions in controlled scenarios such as trolley problems. Platonism

101 Simple Truths We Often Forget post written by: Marc Chernoff Email It‘s not where we stand but in what direction we are moving. Sometimes we find ourselves running in place, struggling to get ahead simply because we forget to address some of the simple truths that govern our potential to make progress. The acquisition of knowledge doesn’t mean you’re growing. Photo by: Alexander Steinhof If you enjoyed this article, check out our new best-selling book. And get inspiring life tips and quotes in your inbox (it's free)... Democratic Party (United States) Since the 1930s, the party has promoted a social liberal platform.[2][11][12] Until the late 20th century the party had a powerful conservative and populist wing based in the rural South, which over time has greatly diminished. Today its Congressional caucus is composed mostly of progressives and centrists.[13] History The Democratic Party evolved from the Jeffersonian Republican or Democratic-Republican Party organized by Thomas Jefferson and James Madison in opposition to the Federalist party of Alexander Hamilton and John Adams. The party favored republicanism, a weak federal government, states' rights, agrarian interests (especially Southern planters) and strict adherence to the Constitution; it opposed a national bank, close ties to Great Britain, and business and banking interests. The Party came to power in the election of 1800. 1860s 1900s Modern era Electoral history Name and symbols "A Live Jackass Kicking a Dead Lion" by Thomas Nast.

Knowledge that, knowledge how, and knowledge by acquaintance Existentialism Existentialism is a term applied to the work of certain late 19th- and 20th-century philosophers who, despite profound doctrinal differences,[1][2][3] shared the belief that philosophical thinking begins with the human subject—not merely the thinking subject, but the acting, feeling, living human individual.[4] In existentialism, the individual's starting point is characterized by what has been called "the existential attitude", or a sense of disorientation and confusion in the face of an apparently meaningless or absurd world.[5] Many existentialists have also regarded traditional systematic or academic philosophies, in both style and content, as too abstract and remote from concrete human experience.[6][7] Definitional issues and background[edit] There has never been general agreement on the definition of existentialism. Concepts[edit] Existence precedes essence[edit] "The subjective thinker’s form, the form of his communication, is his style. The Absurd[edit] Facticity[edit] Angst[edit]

Late Middle Ages Period of European history between 1250 and 1500 CE From the Apocalypse in a Biblia Pauperum illuminated at Erfurt around the time of the Great Famine. Death sits astride a lion whose long tail ends in a ball of flame (Hell). Famine points to her hungry mouth. The Late Middle Ages or Late Medieval Period was the period of European history lasting from 1250 to 1500 AD. The Late Middle Ages followed the High Middle Ages and preceded the onset of the early modern period (and in much of Europe, the Renaissance).[1] Around 1300, centuries of prosperity and growth in Europe came to a halt. Despite the crises, the 14th century was also a time of great progress in the arts and sciences. Combined with this influx of classical ideas was the invention of printing, which facilitated dissemination of the printed word and democratized learning. Historiography and periodization[edit] Modern historiography on the period has reached a consensus between the two extremes of innovation and crisis. Music[edit]