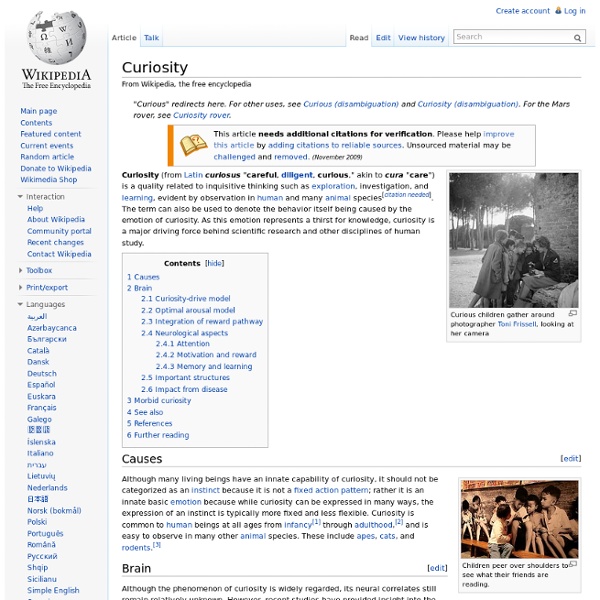 Curious children gather around photographer Toni Frissell, looking at her camera Curiosity (from Latin curiosus "careful, diligent, curious," akin to cura "care") is a quality related to inquisitive thinking such as exploration, investigation, and learning, evident by observation in human and many animal species.[1][2] The term can also be used to denote the behavior itself being caused by the emotion of curiosity. As this emotion represents a thirst for knowledge, curiosity is a major driving force behind scientific research and other disciplines of human study. Causes[edit] Children peer over shoulders to see what their friends are reading. Although many living beings have an innate capability of curiosity, it should not be categorized as an instinct because it is not a fixed action pattern; rather it is an innate basic emotion because, while curiosity can be expressed in many ways, the expression of an instinct is typically more fixed and less flexible. Brain[edit] Attention[edit] Related:  Common connotations of YELLOW

Imagination Imagination, also called the faculty of imagining, is the ability to form new images and sensations that are not perceived through senses such as sight, hearing, or other senses. Imagination helps make knowledge applicable in solving problems and is fundamental to integrating experience and the learning process[1][2][3][4] A basic training for imagination is listening to storytelling (narrative),[1][5] in which the exactness of the chosen words is the fundamental factor to "evoke worlds".[6] It is a whole cycle of image formation or any sensation which may be described as "hidden" as it takes place without anyone else's knowledge.[citation needed] A person may imagine according to his mood, it may be good or bad depending on the situation. Imagination can also be expressed through stories such as fairy tales or fantasies. Description[edit] But in reality, without knowledge, imagination can not be developed. The same limitations beset imagination in the field of scientific hypothesis.

The Stoic: 9 Principles to Help You Keep Calm in Chaos Observing individuals who lead a creative life, we can identify elements of expertise, grit, an understanding, and passion. What’s easy to overlook is the inner system within an individual—the set of principles that govern their mind and behavior. When failure ensues or the need to adapt is necessary, how does one respond? What do they tell themselves? In other words, what’s their philosophy? Not only does philosophy teach us how to live well and become better humans, but it can also aid in overcoming life’s trials and tribulations. The principles within Stoicism are, perhaps, the most relevant and practical sets of rules for entrepreneurs, writers, and artists of all kinds. How can we lead a fulfilling, happy life? It’s important that we understand the obstacles that we face and not run from them. Our guides to Stoicism today will be its three renowned leaders: Epictetus, Marcus Aurelius, and Seneca. Seneca was also a Roman Stoic philosopher, statesman, a tutor and advisor to Nero. 1. 2.

Culturosity.com, Come Grow Your Global Mind Optimism Berlin Wall Monument (West view) – the west side of the Wall is covered with graffiti that reflects the hope and optimism post-1989 The word is originally derived from the Latin optimum, meaning "best." Being optimistic, in the typical sense of the word, ultimately means one expects the best possible outcome from any given situation. This is usually referred to in psychology as dispositional optimism. Researchers sometimes operationalize the term differently depending on their research, however. Explanatory style[edit] Explanatory style is different, though related to, the more traditional, narrower definition of optimism. There is much debate about the relationship between explanatory style and optimism. It is generally thought that, though they should not be used interchangeably, dispositional optimism and explanatory style are at least marginally related. No Negativity sign outside of Unity Church of Pensacola Philosophical optimism[edit] Panglossianism[edit] Optimalism[edit] Health[edit]

The Neglected Virtue of Curiosity Curiosity is the most superficial of all the affections; it changes its objects perpetually; it has an appetite which is sharp, but very easily satisfied; and it has always an appearance of giddiness, restlessness and anxiety. - Edmund Burke, A Philosophical Enquiry into the Origin of our Ideas of the Sublime and Beautiful Curiosity is the first virtue: "[a] burning itch to know is higher than a solemn vow to pursue truth." Yet I find surprisingly little material about curiosity on Less Wrong. Sure, AnnaSalamon shows us how to use curiosity, lukeprog ponders what curiosity looks like, Elizabeth discusses the limits of curiosity, and Eliezer_Yudkowsky offers the meditation on curiosity. But we have never been provided with an overview of the science of curiosity, as has been done for procrastination, motivation, and happiness, for instance. What is curiosity, and how can we become more curious? Curiosity: what? Researchers distinguish between state curiosity and trait curiosity. Intensity.

Hope Hope is an optimistic attitude of mind based on an expectation of positive outcomes related to events and circumstances in one's life or the world at large.[1] As a verb, its definitions include: "expect with confidence" and "to cherish a desire with anticipation".[2] In psychology[edit] Dr. Barbara L. Fredrickson argues that hope comes into its own when crisis looms, opening us to new creative possibilities.[4] Frederickson argues that with great need comes an unusually wide range of ideas, as well as such positive emotions as happiness and joy, courage, and empowerment, drawn from four different areas of one’s self: from a cognitive, psychological, social, or physical perspective.[5] Hopeful people are "like the little engine that could, [because] they keep telling themselves "I think I can, I think I can".[6] Such positive thinking bears fruit when based on a realistic sense of optimism, not on a naive "false hope".[7] The psychologist C.R. D. In healthcare[edit] Background[edit]

Curiosity and Exploration California State University, Northridge By Susan Edelman(spring 1997) What makes people curious? Why do individuals explore the unknown? Curiosity is defined as a need, thirst or desire for knowledge. What exactly are curiosity and exploration? Curiosity and exploration are difficult to define independently when looking at them from a psychological perspective, the concepts motivation and drive come into play and become intertwined. Roget's Thesaurus says that the absence of curiosity is boredom, ennui, satiety, take no interest, mind one's own business, uninquisitive. Historical Overview of Curiosity & Exploration The earliest discussions of curiosity were conducted by philosophers and religious thinkers and centered on the question of curiosity's moral status rather then on its psychological underpinnings. The most basic problem that has occupied curiosity researchers and theorists is the underlying cause of curiosity. William James (1890) pointed out two kinds of curiosity. References

Libertarianism Traditionally, libertarianism was a term for a form of left-wing politics; such left-libertarian ideologies seek to abolish capitalism and private ownership of the means of production, or else to restrict their purview or effects, in favor of common or cooperative ownership and management, viewing private property as a barrier to freedom and liberty.[6][7][8][9] In the United States, modern right-libertarian ideologies, such as minarchism and anarcho-capitalism, co-opted the term in the mid-20th century to instead advocate laissez-faire capitalism and strong private property rights, such as in land, infrastructure, and natural resources.[10][11][12] Etymology[edit] The 17 August 1860 edition of Le Libertaire: Journal du Mouvement Social, a libertarian communist publication in New York In the mid-1890s, Sébastien Faure began publishing a new Le Libertaire while France's Third Republic enacted the lois scélérates ("villainous laws"), which banned anarchist publications in France.

Liberalism Liberalism is a political philosophy or worldview founded on ideas of liberty and equality.[1] Liberals espouse a wide array of views depending on their understanding of these principles, but generally they support ideas such as free and fair elections, civil rights, freedom of the press, freedom of religion, free trade, and private property.[2][3][4][5][6] Etymology and definition[edit] Words such as liberal, liberty, libertarian, and libertine all trace their history to the Latin liber, which means "free".[13] One of the first recorded instances of the word liberal occurs in 1375, when it was used to describe the liberal arts in the context of an education desirable for a free-born man.[13] The word's early connection with the classical education of a medieval university soon gave way to a proliferation of different denotations and connotations. History[edit] Beginnings[edit] Glorious Revolution[edit] Era of enlightenment[edit] American revolution[edit]