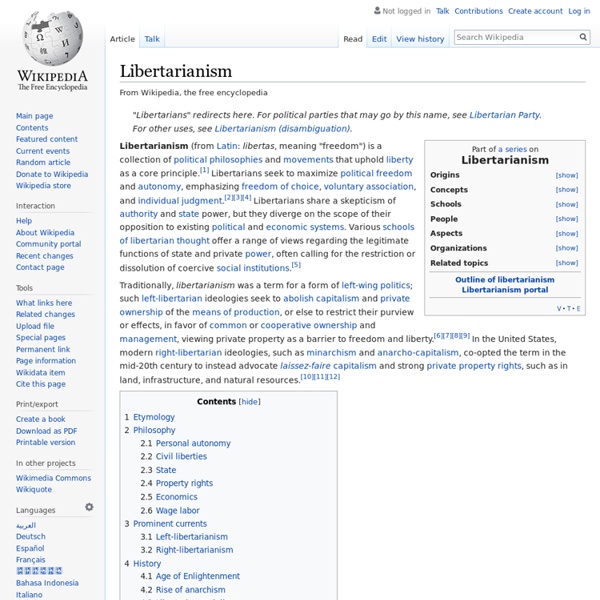 Traditionally, libertarianism was a term for a form of left-wing politics; such left-libertarian ideologies seek to abolish capitalism and private ownership of the means of production, or else to restrict their purview or effects, in favor of common or cooperative ownership and management, viewing private property as a barrier to freedom and liberty.[6][7][8][9] In the United States, modern right-libertarian ideologies, such as minarchism and anarcho-capitalism, co-opted the term in the mid-20th century to instead advocate laissez-faire capitalism and strong private property rights, such as in land, infrastructure, and natural resources.[10][11][12] Etymology[edit] The 17 August 1860 edition of Le Libertaire: Journal du Mouvement Social, a libertarian communist publication in New York In the mid-1890s, Sébastien Faure began publishing a new Le Libertaire while France's Third Republic enacted the lois scélérates ("villainous laws"), which banned anarchist publications in France. Related:  The problems with philosophy

OpenNet Initiative The OpenNet Initiative (ONI) is a joint project whose goal is to monitor and report on internet filtering and surveillance practices by nations. The project employs a number of technical means, as well as an international network of investigators, to determine the extent and nature of government-run internet filtering programs. Participating academic institutions include the Citizen Lab at the Munk Centre for International Studies, University of Toronto; Berkman Center for Internet & Society at Harvard Law School; the Oxford Internet Institute (OII) at University of Oxford; and, The SecDev Group, which took over from the Advanced Network Research Group at the Cambridge Security Programme, University of Cambridge. Methods[edit] ONI uses several methods to test and document internet censorship in a country. ONI Principal Investigators[edit] The ONI principal investigators are:[1] Major Accomplishments[edit] ONI Asia[edit] Psiphon[edit] Censorship research reports[edit] Books[edit] See also[edit]

Indeterminism Indeterminism is the concept that events (certain events, or events of certain types) are not caused, or not caused deterministically (cf. causality) by prior events. It is the opposite of determinism and related to chance. It is highly relevant to the philosophical problem of free will, particularly in the form of metaphysical libertarianism. In science, most specifically quantum theory in physics, indeterminism is the belief that no event is certain and the entire outcome of anything is a probability. Causation without determinism[edit] A number of philosophers have argued that lack of determinism does not entail absence of causation. Necessary but insufficient causation[edit] Indeterminists do not have to deny that causes exist. If x is a necessary cause of y; then the presence of y necessarily implies that x preceded it. If x is a sufficient cause of y, then the presence of x necessarily implies the presence of y. Probabilistic causation[edit] Philosophy[edit] Aristotle[edit] John D.

Liberal From Wikipedia, the free encyclopedia Liberal may refer to: Politics[edit] Economics[edit] Laissez-faire, an economic environment in which the government limits itself to enforcing private property rights and transactions between private parties are free from tariffs, government subsidies, and enforced monopoliesNeoliberalism, a contemporary free-market political-economic philosophyOrdoliberalism, a German variant of neoliberalism that emphasises the need for the state to ensure that the free market produces results close to its theoretical potential Places[edit] United States[edit] Elsewhere[edit] Liberal, Canada Other uses[edit] See also[edit] Tor (anonymity network) Tor (previously an acronym for The Onion Router)[4] is free software for enabling online anonymity and censorship resistance. Tor directs Internet traffic through a free, worldwide, volunteer network consisting of more than five thousand relays[5] to conceal a user's location or usage from anyone conducting network surveillance or traffic analysis. Using Tor makes it more difficult to trace Internet activity, including "visits to Web sites, online posts, instant messages, and other communication forms", back to the user[6] and is intended to protect the personal privacy of users, as well as their freedom and ability to conduct confidential business by keeping their internet activities from being monitored. An extract of a Top Secret appraisal by the NSA characterized Tor as "the King of high secure, low latency Internet anonymity" with "no contenders for the throne in waiting".[7] Alice's Tor client picks a random path to destination server Steven J.

Determinism Determinism is the philosophical position that for every event, including human action, there exist conditions that could cause no other event. "There are many determinisms, depending upon what pre-conditions are considered to be determinative of an event."[1] Deterministic theories throughout the history of philosophy have sprung from diverse and sometimes overlapping motives and considerations. Some forms of determinism can be empirically tested with ideas from physics and the philosophy of physics. Other debates often concern the scope of determined systems, with some maintaining that the entire universe is a single determinate system and others identifying other more limited determinate systems (or multiverse). Varieties[edit] Below appear some of the more common viewpoints meant by, or confused with "determinism". Many philosophical theories of determinism frame themselves with the idea that reality follows a sort of predetermined path Philosophical connections[edit] History[edit]

Liberalism Liberalism is a political philosophy or worldview founded on ideas of liberty and equality.[1] Liberals espouse a wide array of views depending on their understanding of these principles, but generally they support ideas such as free and fair elections, civil rights, freedom of the press, freedom of religion, free trade, and private property.[2][3][4][5][6] Etymology and definition[edit] Words such as liberal, liberty, libertarian, and libertine all trace their history to the Latin liber, which means "free".[13] One of the first recorded instances of the word liberal occurs in 1375, when it was used to describe the liberal arts in the context of an education desirable for a free-born man.[13] The word's early connection with the classical education of a medieval university soon gave way to a proliferation of different denotations and connotations. History[edit] Beginnings[edit] Glorious Revolution[edit] Era of enlightenment[edit] American revolution[edit]

Tor Browser Bundle Tor Network[edit] Tor works by routing Internet traffic through several "onion" servers, obscuring the originating address. This naturally provides anonymity for other Internet programs that are configured to connect to it on the system, or even network. Applications can be directed to the Tor network through a SOCKS proxy at localhost on port 9050 as well as a HTTP proxy at localhost on port 8118. Reading the Tor documentation is highly recommended to prevent configuration mistakes that could compromise the user's anonymity. See also[edit] References[edit] External links[edit] Official website

Military simulation Military simulations, also known informally as war games, are simulations in which theories of warfare can be tested and refined without the need for actual hostilities. Many professional analysts object to the term wargames as this is generally taken to be referring to the civilian hobby, thus the preference for the term simulation. Simulations exist in many different forms, with varying degrees of realism. In recent times, the scope of simulations has widened to include not only military but also political and social factors, which are seen as inextricably entwined in a realistic warfare model. Whilst many governments make use of simulation, both individually and collaboratively, little is known about it outside professional circles. The simulation spectrum[edit] Military Simulations range from field exercises through computer simulations to analytical models; the realism of live manoeuvres is countered by the economy of abstract simulations[1] Heuristic or stochastic?

Cory Doctorow Cory Efram Doctorow (/ˈkɒri ˈdɒktəroʊ/; born July 17, 1971) is a Canadian-British[1] blogger, journalist, and science fiction author who serves as co-editor of the blog Boing Boing. He is an activist in favour of liberalising copyright laws and a proponent of the Creative Commons organization, using some of their licenses for his books. Some common themes of his work include digital rights management, file sharing, and post-scarcity economics.[2][3][4] Life and career[edit] Doctorow, a member of the Open Rights Group's Advisory Council speaks about how he got involved in digital rights. Doctorow later relocated to London and worked as European Affairs Coordinator for the Electronic Frontier Foundation for four years,[2] helping to establish the Open Rights Group, before leaving the EFF to pursue writing full-time in January 2006. Other work and fellowships[edit] He served as Canadian Regional Director of the Science Fiction and Fantasy Writers of America in 1999. Fiction[edit] Awards[edit]

Ted Honderich Ted Honderich (born 30 January 1933) is a Canadian-born British philosopher, Grote Professor Emeritus of the Philosophy of Mind and Logic, University College London.[1] His work has been mainly about five things: consciousness and mind, including the consciousness–brain relation; right and wrong in the contemporary world particularly with democracy, terrorism and war; advocacy of the Principle of Humanity; determinism and freedom; particular problems in logical analysis and metaphysics; the supposed justification of punishment by the state; the political tradition of conservatism. He has given lectures and talks in British, continental European, Irish, American, Canadian, Asian, Russian, and African universities. Biography[edit] Honderich was born Edgar Dawn Ross Honderich on 30 January 1933 in Baden, Ontario, Canada. His papers in philosophical journals have been published in three volumes by Edinburgh University Press. Consciousness[edit] Determinism and freedom[edit] Punishment[edit]

Could China, Russia Rescue Iran? Iran’s leadership may be hoping that Beijing and Moscow will step in and help it with the West. But it’s not in their interests to do so. Vladimir Putin has returned to the Russian presidential office. This comes at a time when U.S. relations with China have been tense. Against this backdrop, China and Russia are both veto wielding members of the U.N. Indeed, Iranian President Mahmoud Ahmadinejad will likely have used his meetings with Putin and senior Chinese officials on the sidelines of this week’s Shanghai Cooperation Organization summit for this very purpose. The likely answer is: not much. Of course, Putin can be expected to crank up the rhetoric in challenging U.S. policies, especially those tied to new sanctions against Iran. Iran is a Russian competitor in the global energy market, and the less oil Iran is allowed to sell, the more scope there will be for Russia to step in. The most important reason is China’s slowing economy.