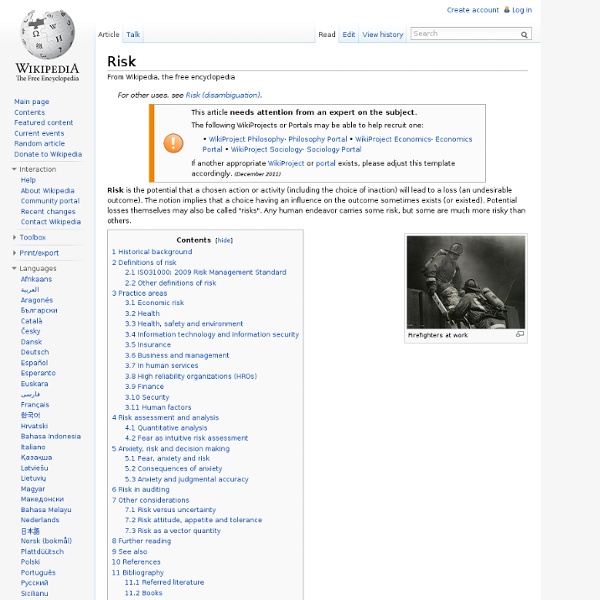 Risk is the potential of losing something of value, weighed against the potential to gain something of value. Values (such as physical health, social status, emotional well being or financial wealth) can be gained or lost when taking risk resulting from a given action, activity and/or inaction, foreseen or unforeseen. Risk can also be defined as the intentional interaction with uncertainty. Risk perception is the subjective judgment people make about the severity of a risk, and may vary person to person. Definitions[edit] Firefighters at work Risk can be defined in a variety of ways. Basic definitions[edit] The probability of something happening multiplied by the resulting cost or benefit if it does. International Organization for Standardization[edit] The ISO 31000 (2009) / ISO Guide 73:2002 definition of risk is the 'effect of uncertainty on objectives'. Other[edit] The related terms "threat" and "hazard" are often used to mean something that could cause harm. History[edit] Health[edit]

Decision making Sample flowchart representing the decision process to add a new article to Wikipedia. Decision-making can be regarded as the cognitive process resulting in the selection of a belief or a course of action among several alternative possibilities. Every decision-making process produces a final choice that may or may not prompt action. Decision-making is the study of identifying and choosing alternatives based on the values and preferences of the decision maker. Decision-making is one of the central activities of management and is a huge part of any process of implementation. Overview[edit] Edit human performance with regard to decisions has been the subject of active research from several perspectives: Decision-making can also be regarded as a problem-solving activity terminated by a solution deemed to be satisfactory. Some have argued that most decisions are made unconsciously. In regards to management and decision-making, each level of management is responsible for different things.

Intuition (philosophy) Intuition is a priori knowledge or experiential belief characterized by its immediacy. Beyond this, the nature of intuition is debated. Roughly speaking, there are two main views. They are: Intuitions are a priori. In the philosophy of Immanuel Kant, intuition is thought of as basic sensory information provided by the cognitive faculty of sensibility (equivalent to what might loosely be called perception). In contemporary analytic philosophy, appeals to our intuitions are an important method for testing claims. The metaphilosophical assumption that philosophy depends on intuitions has recently been challenged by some philosophers. Jump up ^ Immanuel Kant (1787) "Critique of Pure Reason", p35 et seq.

Awareness Concept[edit] Awareness is a relative concept. An animal may be partially aware, may be subconsciously aware, or may be acutely unaware of an event. Awareness may be focused on an internal state, such as a visceral feeling, or on external events by way of sensory perception. Awareness provides the raw material from which animals develop qualia, or subjective ideas about their experience. Insects have awareness that you are trying to swat them or chase after them. Self-awareness[edit] Main article: Self-awareness Popular ideas about consciousness suggest the phenomenon describes a condition of being aware of one's awareness or, self-awareness.[2] Efforts to describe consciousness in neurological terms have focused on describing networks in the brain that develop awareness of the qualia developed by other networks.[3] Neuroscience[edit] Basic awareness[edit] Basic awareness of one's internal and external world depends on the brain stem. Basic interests[edit] Changes in awareness[edit]

Finding German-Language Pen Pals (2) Finding German-Language Pen PalsPart 2 Of course, in order for any of this to work, you must first find someone with whom you can exchange mail! If you have been to a German-speaking country, you may know someone you can write. But even then, not all of the people you know will have email capabilities or even want to correspond on a regular basis. And if you don't really know anyone to write, what can you do? That's where pen-pal organizations come in. But many other pen-pal and e-pal services are now online offering email contacts. If you want to be listed yourself, so that others can find your email address and write to you, then you can fill out an online form. As with postal mail, once you contact an address there is no guarantee you will get a response. For language-learning purposes, it may be wise to avoid the romance-oriented pen-pal sites. Here's our listing of Online Pen Pal Services for German - Schreibt mal wieder!

Tantra For Tantric Buddhism, see Vajrayana. For the texts classified as Tantras, see Tantras. Tantra[note 1] is the name given by recent scholars to a style of meditation and ritual which arose in India no later than the 5th century AD.[1] Definitions[edit] Several definitions of Tantra exist. Traditional[edit] The Tantric tradition offers various definitions of tantra. Because it elaborates (tan) copious and profound matters, especially relating to the principles of reality (tattva) and sacred mantras, and because it provides liberation (tra), it is called a tantra.[2] A second, very similar to the first, comes from Swami Satyananda. Tantra embodies two sanskrit words: tanoti (expands) and trayoti (liberates)... A tantra is a divinely revealed body of teachings, explaining what is necessary and what is a hindrance in the practice of the worship of God; and also describing the specialized initiation and purification ceremonies that are the necessary prerequisites of Tantric practice.[4] Western[edit]

Sound 'The Cube', one of the world's largest, privately owned electroacoustic measurement facilities, is an empty room measuring, 12 x 12 x 13 meters. Starting from the technical drawings it is used in all stages of product development. Its enormous size makes it possible to measure acoustic response without reflections from walls, floor, or ceiling. 'The Cube' gives us the precision we need to measure a loudspeaker’s frequency, power and directivity responses. Accurate measurements alone aren't enough though. To truly sense whether music comes alive with the right tone and detail the human ear is still the final judge. A 103 inch television is hoisted a meter high by a crane, then dropped. Welcome to 'The torture chamber', Bang & Olufsen's toughest test facility where products are put through stresses and strains far beyond standard limits. We inflict every conceivable hardship on our TV’s, speakers and remotes to prepare them for the toughest test of all - the home.

Pandora According to the myth, Pandora opened a jar (pithos), in modern accounts sometimes mistranslated as "Pandora's box" (see below), releasing all the evils of humanity—although the particular evils, aside from plagues and diseases, are not specified in detail by Hesiod—leaving only Hope inside once she had closed it again.[6] The Pandora myth is a kind of theodicy, addressing the question of why there is evil in the world. Hesiod[edit] Hesiod, both in his Theogony (briefly, without naming Pandora outright, line 570) and in Works and Days, gives the earliest version of the Pandora story. Theogony[edit] The Pandora myth first appears in lines 560–612 of Hesiod's poem in epic meter, the Theogony (ca. 8th–7th centuries BC), without ever giving the woman a name. From her is the race of women and female kind: of her is the deadly race and tribe of women who live amongst mortal men to their great trouble, no helpmates in hateful poverty, but only in wealth. Works and Days[edit] Homer[edit] Notes[edit]

Nomenclature Nomenclature is a system of names or terms, or the rules for forming these terms in a particular field of arts or sciences.[1] The principles of naming vary from the relatively informal conventions of everyday speech to the internationally-agreed principles, rules and recommendations that govern the formation and use of the specialist terms used in scientific and other disciplines. Onomastics, the study of proper names and their origins, includes: anthroponymy, concerned with human names, including personal names, surnames and nicknames; toponymy the study of place names; and etymology, the derivation, history and use of names as revealed through comparative and descriptive linguistics. The scientific need for simple, stable and internationally-accepted systems for naming objects of the natural world has generated many formal nomenclatural systems. Definition & criteria[edit] Nomenclature is a system of words used in particular discipline. Etymology[edit] Onomastics and nomenclature[edit]

Faith (religion) Etymology[edit] The English word is thought to date from 1200–50, from the Middle English feith, via Anglo-French fed, Old French feid, feit from Latin fidem, accusative of fidēs (trust), akin to fīdere (to trust).[7] Religions[edit] Bahá'í Faith[edit] In the Bahá'í Faith, faith is ultimately the acceptance of the divine authority of the Manifestations of God.[8] In the religion's view, faith and knowledge are both required for spiritual growth.[8] Faith involves more than outward obedience to this authority, but also must be based on a deep personal understanding of religious teachings.[8] By faith is meant, first, conscious knowledge, and second, the practice of good deeds.[9] Buddhism[edit] Faith (Pali: Saddhā, Sanskrit: Śraddhā) is an important constituent element of the teachings of Gautama Buddha— in both the Theravada and the Mahayana traditions. a conviction that something isa determination to accomplish one's goalsa sense of joy deriving from the other two Christianity[edit]