UFO sightings shocking footage - Operation Paperclip, Project Blue Book & Project Aroura. Pentagon Papers’ Ellsberg Says Snowden Saves Us From The “United Stasi Of America” Zero Hedge June 10, 2013 It is perhaps too early to judge the impact of Edward Snowden’s confirmation of conspiracy fact, but in Pentagon Papers’ Daniel Ellsberg opinion in today’s Guardian, there has not been a more important leak in American history. 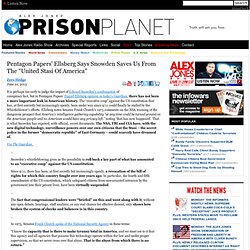 The “executive coup” against the US constitution that has, at first sercretly but increasingly openly, been under way since 9/11 could finally be stalled by the Whistleblower’s efforts. Ellsberg notes Senator Frank Church’s 1975 comments on the NSA warning of the dangerous prospect that America’s intelligence gathering capability “at any time could be turned around on the American people and no American would have any privacy left,” noting ‘that has now happened’. That is what Snowden has exposed, with official, secret documents. Project Blue beam is unfolding all over the World today and only if you are truly blind can you miss it. Ahmadinejad predicts Chavez will be resurrected with Jesus, Muslim prophet - Mar 7 I have Just added more Video proof at the bottom of the unfolding project blue mean deception Globally March 8 2013 Project Blue Beam could easily have a great part of the deception where seemingly dead people are again "seemingly" brought back to life. 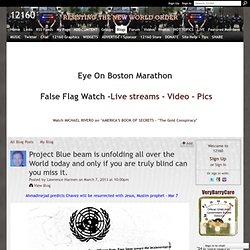 Like Princess Diana who was a Pagan and here we see the Catholic Chavez is being said will come with their Beast/He Goat Prophet Baphomet called Mohamet or Mohammad. The facts are all around us that suggest they have faked many peoples deaths in recent years = Saddam Hussein was hanged (Who does that) Moammar Gadhafi was killed then supposedly sodomized and buried in the desert (Who does that) Osama was supposed to have been killed and buried (with out a Video to prove anything). Mark 13:22 For false Christs and false prophets shall rise, and shall shew signs and wonders, to seduce, if it were possible, even the elect. So You Were Wondering What Project Bluebeam Might Look Like? Did Someone Help Ed Snowden Punch a Hole in the NSA? - War Is Crime. Ed Snowden, NSA leaker. 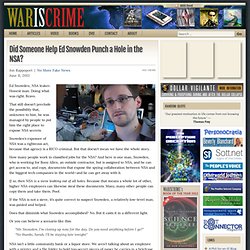 Honest man. Doing what was right. Bravo. That still doesn’t preclude the possibility that, unknown to him, he was managed by people to put him the right place to expose NSA secrets. Snowden’s exposure of NSA was a righteous act, because that agency is a RICO criminal. How many people work in classified jobs for the NSA? If so, then NSA is a sieve leaking out of all holes. If the NSA is not a sieve, it’s quite correct to suspect Snowden, a relatively low-level man, was guided and helped.

Does that diminish what Snowden accomplished? Or you can believe a scenario like this: “Mr. NSA isn’t a little community bank or a liquor store. If there are people who arranged Snowden’s access to NSA secrets, without him knowing it, they’ll be obscured by the maze of partisan political squabbling and Congressional idiots holding hearings. Between these morons and the press, the public will be treated, night and day, to the following: Can Snowden be extradited back here? 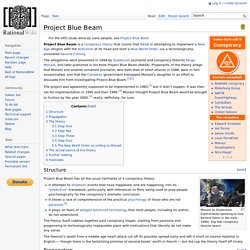 Project Blue Beam is a conspiracy theory that claims that NASA is attempting to implement a New Age religion with the Antichrist at its head and start a New World Order, via a technologically-simulated Second Coming. The allegations were presented in 1994 by Quebecois journalist and conspiracy theorist Serge Monast, and later published in his book Project Blue Beam (NASA). Proponents of the theory allege that Monast and another unnamed journalist, who both died of heart attacks in 1996, were in fact assassinated, and that the Canadian government kidnapped Monast's daughter in an effort to dissuade him from investigating Project Blue Beam.[1][2] The project was apparently supposed to be implemented in 1983,[1] but it didn't happen.

It was then set for implementation in 1995 and then 1996.[3] Monast thought Project Blue Beam would be brought to fruition by the year 2000,[4] really, definitely, for sure. [edit] Structure [edit] Alex Jones Project Bluebeam Possible Alien Invasion George Noory. Did the CIA Give the NSA Documents to Ed Snowden?  Published on June 13, 2013 by admin · No Comments Jon Rappoport/Activist Post Current press reports focus on PRISM, the NSA’s relationships with the biggest tech companies in the world, and the spilled leaks of Ed Snowden. 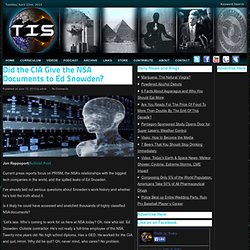 I’ve already laid out serious questions about Snowden’s work history and whether he’s told the truth about it. Is it likely he could have accessed and snatched thousands of highly classified NSA documents? “Let’s see. “Tell you what. Here is a more likely scenario. Snowden never saw any of those thousands of documents on an NSA computer. Instead, he was either used or volunteered as a CIA operative to carry the endless turf war between CIA and NSA a new step forward. This was a covert op launched by the CIA against a chief rival, the NSA. PROJECT BLUE BEAM of NASA. NASA s Project Blue Beam - NWO - Full Version.