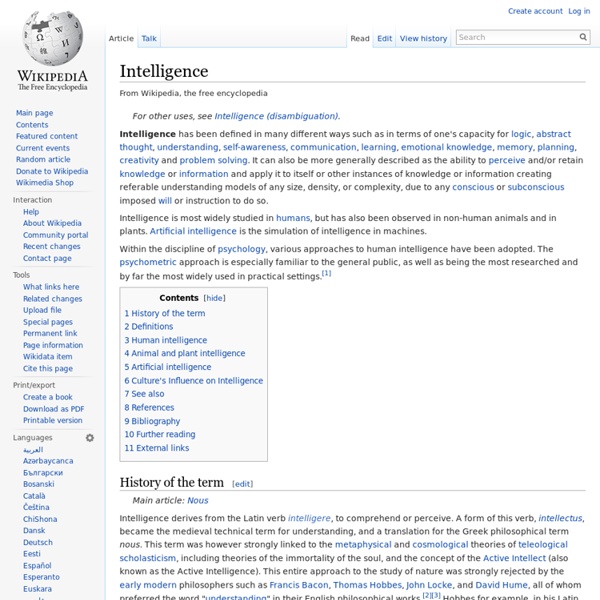 Intelligence is most widely studied in humans, but has also been observed in non-human animals and in plants. Artificial intelligence is the simulation of intelligence in machines. Within the discipline of psychology, various approaches to human intelligence have been adopted. The psychometric approach is especially familiar to the general public, as well as being the most researched and by far the most widely used in practical settings.[1] §History of the term[edit] Intelligence derives from the Latin verb intelligere, to comprehend or perceive. §Definitions[edit] The definition of intelligence is controversial. From "Mainstream Science on Intelligence" (1994), an editorial statement by fifty-two researchers: A very general mental capability that, among other things, involves the ability to reason, plan, solve problems, think abstractly, comprehend complex ideas, learn quickly and learn from experience. What is considered intelligent varies with culture. §Human intelligence[edit]

The 16 Human Needs Four generations of Harvard University psychologists – William James, William McDougall, Henry A. Murray, and David McClelland – sought to identify the human needs that make us tick. Abraham Maslow, a Brandeis psychologist, suggested a hierarchy of human needs driven by the overarching goal of self-actualization. Today needs theory has little influence in psychology. What happened? How could the idea of human needs – so obviously relevant to understanding people – be ignored in contemporary psychology? With the benefit of hindsight, I think previous needs theorists set the right course for the scientific study of personality , but they left three essential tasks undone. First, previous needs theorists put forth theoretical lists of human needs and spent little time demonstrating the reliability and validity of their taxonomy. Susan Havercamp and I addressed the requirement of a scientific taxonomy of human needs to replace yesterday’s many lists of personal favorites.

Milton H. Erickson Milton Hyland Erickson (5 December 1901 – 25 March 1980) was an American psychiatrist and psychologist specializing in medical hypnosis and family therapy. He was founding president of the American Society for Clinical Hypnosis and a fellow of the American Psychiatric Association, the American Psychological Association, and the American Psychopathological Association. He is noted for his approach to the unconscious mind as creative and solution-generating. Personal history[edit] Erickson frequently drew upon his own experiences to provide examples of the power of the unconscious mind. Erickson grew up in Lowell, Wisconsin, in a modest farming family and intended to become a farmer like his father. At age 17, he contracted polio and was so severely paralysed that the doctors believed he would die. E: As I lay in bed that night, I overheard the three doctors tell my parents in the other room that their boy would be dead in the morning. Milton H. Hypnosis[edit] Indirect techniques[edit]

Piezoelectrical Phenomenon in the Soft Tissue - mjbtech At the moment of the pressure application Dr. Fukada and Dr. Yasuda were able to register negative electrical potentials on the compressed side of the bone. These potentials returned to zero as soon as the further increase of pressure ceased but initial pressure was still maintained. At the moment pressure was released and the bone came back to its original form, the authors registered positive electric potentials on the tensed surface of the bone. Why was this discovery so important? Dr. For our discussion it is important to find out what happened after the initial publication of Fukada and Yasuda. As we know bones are composed of two major parts: organic part presented by the collagen fibers and mineral part (Ca, P, etc) forms apatite. The organic part gives the bone elasticity, while the inorganic part gives the bone its firmness and stability. Everything went upside down when in 1961 two American scientists R.O. Anderson J.C., Eriksson C.

Science and Technology: Paper : Electricity Generated by Human Body As we learned in intro physics, everything is made up of atoms, and atoms are made up of protons, neutrons and electrons. Protons have a positive charge, neutrons have a neutral charge, and electrons have a negative charge. When these charges are out of balance, an atom becomes either positively or negatively charged. The switch between one type of charge and the other allows electrons to flow from one atom to another. This flow of electrons, or a negative charge, is what we call electricity. When we talk about the nervous system sending "signals" to the brain, or synapses "firing," or the brain telling our hands to contract around a door handle, what we're talking about is electricity carrying messages between point A and point B. Electricity is a key to survival. "The body generates an electrical current by changing chemical concentrations in and around the nerves.Basically, when a nerve signal is sent, potassium ions flood out of nerve cells and sodium ions flood in. Principle 1. 1.

How Radio Works" "Radio waves" transmit music, conversations, pictures and data invisibly through the air, often over millions of miles -- it happens every day in thousands of different ways! Even though radio waves are invisible and completely undetectable to humans, they have totally changed society. Whether we are talking about a cell phone, a baby monitor, a cordless phone or any one of the thousands of other wireless technologies, all of them use radio waves to communicate. Here are just a few of the everyday technologies that depend on radio waves: The list goes on and on... Even things like radar and microwave ovens depend on radio waves. ­The funny thing is that, at its core, radio is an incredibly simple technology. In this article, we will explore the technology of radio so that you can completely understand how invisible radio waves make so many things possible!

Make your very own solar panel!  Here's how! Want to know how to Make a solar panel in your kitchen? Make a solar cell in your kitchen Our solar cell is made from cuprous oxide instead of silicon. Cuprous oxide is one of the first materials known to display the photoelectric effect, in which light causes electricity to flow in a material. Thinking about how to explain the photoelectric effect is what led Albert Einstein to the Nobel prize for physics, and to the theory of relativity. Materials you will need The solar cell is made from these materials: A sheet of copper flashing from the hardware store. How to build the solar cell My burner looks like this: The first step is to cut a piece of the copper sheeting that is about the size of the burner on the stove. Next, place the cleaned and dried copper sheet on the burner and turn the burner to its highest setting. As the copper starts to heat up, you will see beautiful oxidation patterns begin to form. As the copper gets hotter, the colors are replaced with a black coating of cupric oxide. As the copper cools, it shrinks. A note about power