Curiosity. Curious children gather around photographer Toni Frissell, looking at her camera Curiosity (from Latin curiosus "careful, diligent, curious," akin to cura "care") is a quality related to inquisitive thinking such as exploration, investigation, and learning, evident by observation in human and many animal species.[1][2] The term can also be used to denote the behavior itself being caused by the emotion of curiosity. 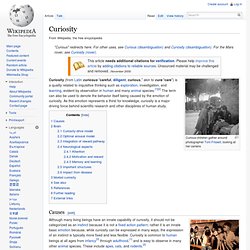 As this emotion represents a thirst for knowledge, curiosity is a major driving force behind scientific research and other disciplines of human study. Causes[edit] Children peer over shoulders to see what their friends are reading. Although many living beings have an innate capability of curiosity, it should not be categorized as an instinct because it is not a fixed action pattern; rather it is an innate basic emotion because, while curiosity can be expressed in many ways, the expression of an instinct is typically more fixed and less flexible.

Imagination. Imagination, also called the faculty of imagining, is the ability to form new images and sensations that are not perceived through senses such as sight, hearing, or other senses. 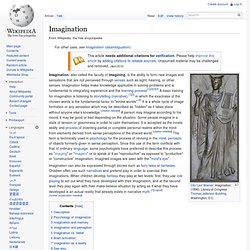 Imagination helps make knowledge applicable in solving problems and is fundamental to integrating experience and the learning process[1][2][3][4] A basic training for imagination is listening to storytelling (narrative),[1][5] in which the exactness of the chosen words is the fundamental factor to "evoke worlds".[6] It is a whole cycle of image formation or any sensation which may be described as "hidden" as it takes place without anyone else's knowledge. [citation needed] A person may imagine according to his mood, it may be good or bad depending on the situation. Some people imagine in a state of tension or gloominess in order to calm themselves. Imagination can also be expressed through stories such as fairy tales or fantasies.

Optimism. Berlin Wall Monument (West view) – the west side of the Wall is covered with graffiti that reflects the hope and optimism post-1989 The word is originally derived from the Latin optimum, meaning "best. 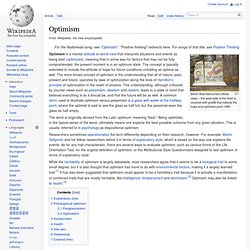 " Being optimistic, in the typical sense of the word, ultimately means one expects the best possible outcome from any given situation. This is usually referred to in psychology as dispositional optimism. Hope. Hope is an optimistic attitude of mind based on an expectation of positive outcomes related to events and circumstances in one's life or the world at large.[1] As a verb, its definitions include: "expect with confidence" and "to cherish a desire with anticipation".[2] In psychology[edit] Dr. 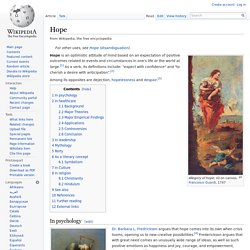 Barbara L. Fredrickson argues that hope comes into its own when crisis looms, opening us to new creative possibilities.[4] Frederickson argues that with great need comes an unusually wide range of ideas, as well as such positive emotions as happiness and joy, courage, and empowerment, drawn from four different areas of one’s self: from a cognitive, psychological, social, or physical perspective.[5] Hopeful people are "like the little engine that could, [because] they keep telling themselves "I think I can, I think I can".[6] Such positive thinking bears fruit when based on a realistic sense of optimism, not on a naive "false hope".[7] The psychologist C.R. D. Libertarianism. Liberalism. Electricity. Autumn. Autumn, interchangeably known as fall in the US and Canada,[1] is one of the four temperate seasons. 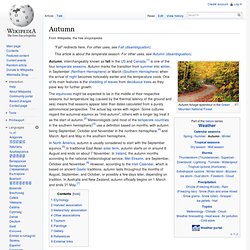 Autumn marks the transition from summer into winter, in September (Northern Hemisphere) or March (Southern Hemisphere) when the arrival of night becomes noticeably earlier and the temperature cools. One of its main features is the shedding of leaves from deciduous trees as they pave way for further growth. The equinoxes might be expected to be in the middle of their respective seasons, but temperature lag (caused by the thermal latency of the ground and sea) means that seasons appear later than dates calculated from a purely astronomical perspective. The actual lag varies with region. In North America, autumn is usually considered to start with the September equinox.[5] In traditional East Asian solar term, autumn starts on or around 8 August and ends on about 7 November.

Easter. The last week of Lent is called Holy Week, and it contains the days of the Easter Triduum, including Maundy Thursday (also known as Holy Thursday), commemorating the Last Supper and its preceding foot washing,[8][9] as well as Good Friday, commemorating the crucifixion and death of Jesus.[10] Easter is followed by a fifty-day period called Eastertide, or the Easter Season, ending with Pentecost Sunday. 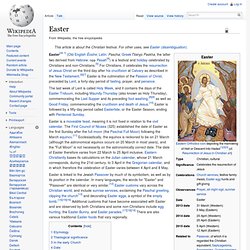 Easter is a moveable feast, meaning it is not fixed in relation to the civil calendar. The First Council of Nicaea (325) established the date of Easter as the first Sunday after the full moon (the Paschal Full Moon) following the March equinox.[11] Ecclesiastically, the equinox is reckoned to be on 21 March (although the astronomical equinox occurs on 20 March in most years), and the "Full Moon" is not necessarily on the astronomically correct date.

The date of Easter therefore varies from 22 March to 25 April inclusive. Lemon. History A lemon tree has fruit and flowers The origin of the lemon is a mystery, though it is thought that lemons first grew in Assam (a region in Northeast India), northern Burma, and China.[1][2] A study of the genetic origin of the lemon reported that it is a hybrid between sour orange and citron.[3] Lemons were known to the Jews of Jerusalem, who, according to Josephus, pelted an errant high priest with them during a festival in the 90s BC,[4] although Jewish tradition maintains that this was done with citrons, not lemons.[5] They entered Europe near southern Italy no later than the 1st century AD, during the time of Ancient Rome. 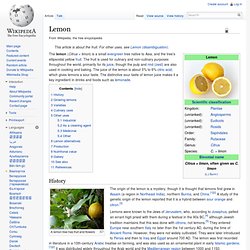 However, they were not widely cultivated. They were later introduced to Persia and then to Iraq and Egypt around 700 AD. Summer. A field during summer in Belgium. 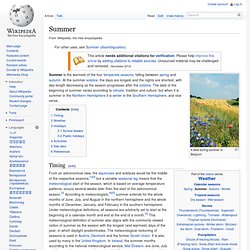 Mardi Gras. Traditions[edit] Carnival is an important celebration in Anglican and Catholic European nations.[6] In the United Kingdom and Ireland, the week before Ash Wednesday is called "shrovetide", ending on Shrove Tuesday. 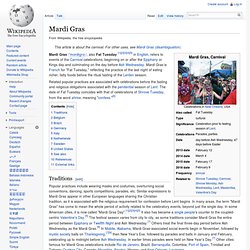 It has its popular celebratory aspects as well. Pancakes are a traditional food. Pancakes and related fried breads or pastries made with sugar, fat and eggs are also traditionally consumed at this time in many parts of Latin America and the Caribbean. Animal Crossing. Four Animal Crossing games have been released worldwide, one each for the Nintendo GameCube, Nintendo DS, Wii, and the Nintendo 3DS. 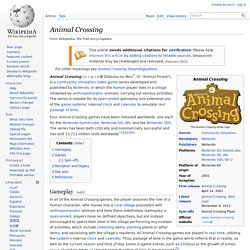 The series has been both critically and commercially successful and has sold 23.711 million units worldwide.[1][2][3][4] Gameplay[edit] One notable feature of the Animal Crossing series is the high level of customization available, some of which affects the outcome of the game.[6] The player character is both named and gendered, and their appearance can be modified by buying or designing custom clothes and accessories or changing the hairstyle (introduced in Wild World). The player's house can also be furnished, decorated, and later expanded: the player can purchase and collect furniture from Tom Nook, the village merchant, and place it anywhere in the house, as well as change both the wallpaper and floor designs.

All installments of Animal Crossing allow some form of communication between players, both offline and online. Games[edit] Spin-offs[edit] Love. For information about showing love on Wikipedia, see WP:LOVE and WP:♥. Love in its various forms acts as a major facilitator of interpersonal relationships and, owing to its central psychological importance, is one of the most common themes in the creative arts.[8] Love may be understood as a function to keep human beings together against menaces and to facilitate the continuation of the species.[9] Definitions The word "love" can have a variety of related but distinct meanings in different contexts. Cowardice. Cowardice is a trait wherein fear and excess self-concern override doing or saying what is right, good and of help to others or oneself in a time of need—it is the opposite of courage.

As a label, "cowardice" indicates a failure of character in the face of a challenge.[1] Etymology[edit] The English surname Coward (as in Noël Coward), however, has the same origin and meaning as the word "cowherd". Military law[edit] Acts of cowardice have long been punishable by military law, which defines a wide range of cowardly offenses including desertion in face of the enemy and surrendering to the enemy against orders. Intelligence. Intelligence is most widely studied in humans, but has also been observed in non-human animals and in plants. Traffic light. Traffic lights, also known as traffic signals, traffic lamps, signal lights, stop lights and robots,[1] and also known technically as traffic control signals[2] are signalling devices positioned at road intersections, pedestrian crossings and other locations to control competing flows of traffic. Traffic lights were first installed in 1868 in London[3] and are now used all over the world. the green light allows traffic to proceed in the direction denoted, if it is safe to do sothe yellow light denoting prepare to stop short of the intersection, if it is safe to do sothe red signal prohibits any traffic from proceeding.

Caution. Friendship. Portrait of Two Friends by Italian artist Pontormo c. 1522 Friendship is a relationship of mutual affection between two or more people.[1] Friendship is a stronger form of interpersonal bond than an association. Warning sign. Exhibit mostly of various warning signs, Turin automotive museum (some regulatory signs like Do Not Enter also visible). A traffic warning sign is a type of traffic sign that indicates a hazard ahead on the road that may not be readily apparent to a driver.[1] Happiness. Happiness is a mental or emotional state of well-being defined by positive or pleasant emotions ranging from contentment to intense joy.[1] A variety of biological, psychological, religious, and philosophical approaches have striven to define happiness and identify its sources.

Various research groups, including positive psychology, are employing the scientific method to research questions about what "happiness" is, and how it might be attained. Recreation. Warm. Warm or WARM can refer to: Sunlight.