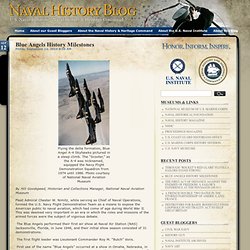 The “Scooter,” as the A-4 was nicknamed, equipped the Navy Flight Demonstration Squadron from 1974 until 1986. Photo courtesy of National Naval Aviation Museum By Hill Goodspeed, Historian and Collections Manager, National Naval Aviation Museum Fleet Admiral Chester W. Nimitz, while serving as Chief of Naval Operations, formed the U.S. The Blue Angels performed their first air show at Naval Air Station (NAS) Jacksonville, Florida, in June 1946, and their initial show season consisted of 31 demonstrations. The first flight leader was Lieutenant Commander Roy M. First use of the name “Blue Angels” occurred at a show in Omaha, Nebraska, in July 1946. Www.blueangelsassociation.org/flight-teams.

Www.blueangelsassociation.org. Accident history of the Blue Angels. The Blue Angels: A 65 Year History. At the end of World War II, the Chief of Naval Operations, Fleet Adm. 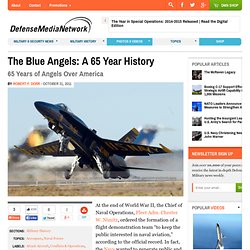 An F/A-18 Hornet assigned to the U.S. Blue Angels History - US NAVY Flight Demonstration Squadron. After the end of the World War II the importance, the publicity and predominantly - the rating of US Navy became lower in the eyes of ordinary people who were used to read about the numerous victories of the Navy pilots. 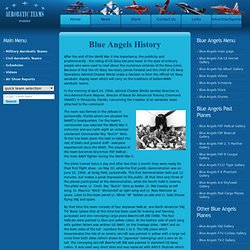 Because of that the US Navy Secretary James Forestal and the chief of US Navy Operations Admiral Chester Nimitz make a decision to form the official US Navy aerobatic display team which will carry on the traditions of before-WWII aerobatic teams. In the morning of April 24, 1946, admiral Chester Nimitz sended directive to Vice-Admiral Frank Wagner, director of Naval Air Advanced Training Command (NAATC) in Pensacola, Florida, concerning the creation of an aerobatic team attached to the command. The team was formed in the airbase in Jacksonville, Florida where are situated the NAATC's headquarters. For the team's commander was selected the World War II instructor and ace (with eight air victories) Lieutenant Commander Roy "Butch" Voris. Blue Angels Alum. Blue Angels : Official Website. The Blue Angels Team.

A total of 16 officers voluntarily serve with the Blue Angels. 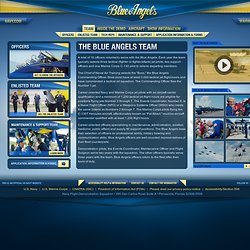 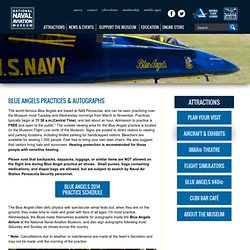 Practices typically begin at 11:30 a.m. (Central Time), and last about an hour. Admission to practice is FREE and open to the public.* The outside viewing area for the Blue Angels practice is located on the Museum Flight Line north of the Museum. Signs are posted to direct visitors to viewing and parking locations, including limited parking for handicapped visitors. Please note that backpacks, daypacks, luggage, or similar items are NOT allowed on the flight line during Blue Angel practice air shows. The Blue Angels often defy physics with spectacular aerial feats but, when they are on the ground, they make time to meet and greet with fans of all ages.

. * Note: Cancellations due to weather or maintenance are made at the team’s discretion and may not be made until the morning of the practice.