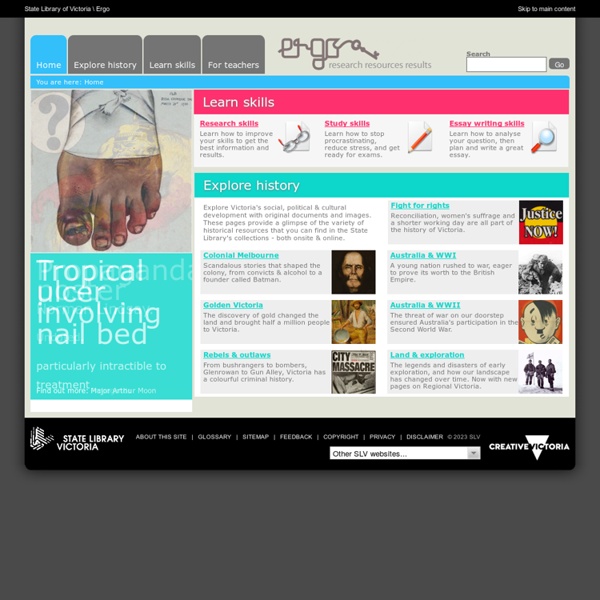 Services For Year 11 & 12 Students The University Library offers free library membership for Year 11 and 12 students who need access to comprehensive research materials. The Year 11 and 12 program is available to all South Australian schools and includes: Membership for up to 12 months. Propaganda Australian propaganda was designed to maintain public anger about German atrocities and idealise Eora: Aboriginal Sydney Eora: Aboriginal Sydney, 1770 - 1850, offers an insight into Sydney and the local indigenous community in the years following the arrival of the Bèerewalgal, 'people from the clouds', in 1788. United by a common language, strong ties of kinship, and a rich saltwater economy, the indigenous inhabitants survived as skilled hunter-fisher-gatherers in family groups or clans scattered along the coast. They identified themselves as Eora (yura), simply meaning 'People', a word derived from Ee 'yes' and ora 'here' or 'this place', revealing their deep connection to the land.

Curriculum connections - Vrroom Australian History The collection of records in Vrroom offers a window into key events and significant themes of 20th-century Australian History – events such as the birth of the Commonwealth of Australia in 1901 and themes relating to people, power and politics, immigration,national identity and environmental issues. In 2012 Vrroom is linking grouped primary sources with the Australian Curriculum: History. See Traversing Antarctica, the Australian experience. Vrroom can help teachers and students find archival records relating to nine broad research topics.

Australian science timeline 2.24 This timeline began as a starting point for people looking for terms and names to use in Web searches relating to the history of Australian science and technology, and only later acquired links to relevant pages for some of these. Suggestions for additions, corrections and such are welcome — but if possible, please provide a year — suggestions which lack a year are far more likely to miss out on a place. The email address that I supply here will not reach me unless you put my first name at the front. The rest is macinnis@ozemail.com.au -- which is a spam dump. I particularly solicit suggestions for links to Web sites covering individual items here.

1808 Rum Rebellion On 26th January 1808, officers and men of the New South Wales Corps marched to Government House in Sydney in an act of rebellion against Governor William Bligh. Bligh was arrested and the colony was placed under military rule. This was the only time in Australian history that a government was overthrown by a military coup. The military stayed in power for two years until Lachlan Macquarie, the fifth Governor of NSW, assumed office at the beginning of 1810.

Libraries SA Access Libraries of South Australia from your mobile device. Manage your SA OneCard Network account, search the catalogue, renew and reserve books and digital content. The app's key features include: Use your phone as a library card - store your membership number and barcode on your phone Search the catalogue - locate items on the catalogue and place holds with just a few clicks eBooks & audiobooks - read our massive range of titles on your tablet or phone

Burke and Wills: Then and Now Join us on a fascinating real-time journey across Australia. On 20 August 2010, the Burke and Wills Environmental Expedition (BWEE) sets out to retrace the steps of the 1860 Burke and Wills expedition. As the BWEE progresses along the route of the track, from Melbourne to the Gulf of Carpentaria, Dr Jonathan King and cinematographer Michael Dillon will interview Indigenous elders, local farmers, and scientists about current environmental issues. The 1860 expedition, organised by the Royal Society of Victoria, set out with various objectives: to collect scientific data about Australia’s flora and fauna, to survey the land and identify good pasture, and to be the first complete crossing of the continent from south to north. Whilst the 1860 expedition has been mythologised as a tragic disaster, its members, including William Wills and Ludwig Becker, documented the people, land, and weather that they encountered in often beautiful, and occasionally startling, ways.

Classroom learning What's new Indigenous cultures and contact history Encounters includes an interactive map, digital timeline and online activities. It is based on the powerful stories shared by Aboriginal and Torres Strait Islander peoples in the Encounters exhibition.

Natural Resources Adelaide and Mount Lofty Ranges As a student, your voice and opinions are important! You should know that what you have to say is valued, and that you can contribute to the solutions to local issues. Having a say on things that matter to you is often termed ‘youth voice’ or ‘student voice’.