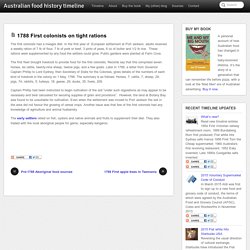 In the first year of European settlement at Port Jackson, adults received a weekly ration of 7 lb of flour, 7 lb of pork or beef, 3 pints of peas, 6 oz of butter and 1/2 lb rice. These rations were supplemented by any food the settlers could grow. Public gardens were planted at Farm Cove. The first fleet brought livestock to provide food for the first colonists. Records say that this comprised seven horses, six cattle, twenty-nine sheep, twelve pigs, and a few goats. Captain Phillip had been instructed to begin cultivation of the soil “under such regulations as may appear to be necessary and best calculated for securing supplies of grain and provisions“. Australian food and drink. Australia has a rich variety of foods and drinks, adopted and adapted since colonisation and developed as part of a multi-cultural society. 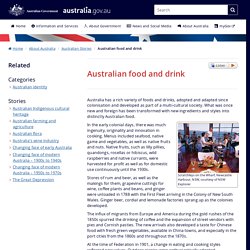 What was once new and foreign has been transformed with new ingredients and styles into distinctly Australian food. A day in the life of a convict. Some hapless individuals experienced the full horrors of convict transportation. 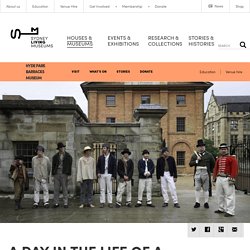 It was no wonder that some, like Anderson, endured periods of mental instability. Navy seaman and thief Charles ‘Bony’ Anderson arrived in Sydney from Devonshire in 1834, aged 24. Landmarks: People and Places across Australia. Landmarks: People and Places across Australia is a National Museum gallery exploring a broad history of Australia through stories of places and their peoples. 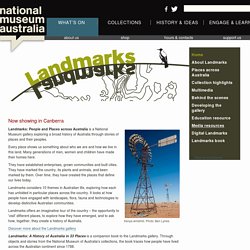 Every place shows us something about who we are and how we live in this land. Many generations of men, women and children have made their homes here. They have established enterprises, grown communities and built cities. They have marked the country, its plants and animals, and been marked by them. Over time, they have created the places that define our lives today. Landmarks considers 10 themes in Australian life, exploring how each has unfolded in particular places across the country.

SpatialGenie Login Page. Australian National Maritime Collection - results from searching the collection. Until the early 19th century prisons were administered locally and were not the responsibility or property of central government, with the exception of King's Bench, Marshalsea, Fleet Prisons and Newgate Gaol which were all Crown prisons attached to the central courts. 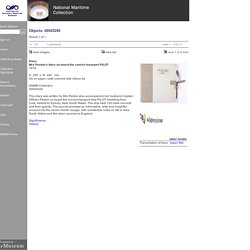 Prisons were used for the correction of vagrants and those convicted of lesser offences, for the coercion of debtors and for the custody of those awaiting trial or the execution of sentence. For nearly all other crimes the punishments consisted of a fine, capital punishment or transportation overseas. From the early 1600s European societies used the transportation of criminals overseas as a form of punishment. When in the 18th century, the death penalty came to be regarded as too severe for certain capital offences, such as theft and larceny, transportation to the British colonies in North America became a popular form of sentence. Leaving India for England on 30 August 1818, the author writes some 12 pages on the voyage. Outback House - last day of shearing. Transcript Men in the shearing shedMANWhere's my catcher? 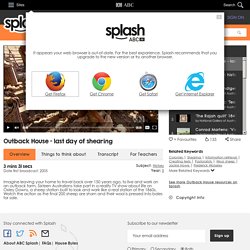 We're ready to rumble.PETER GORDONLet's go, let's go. Put the pressure on the catcher.NARRATORIt's the shearers' last day at Oxley Downs. Community events. Community events are a way of bringing local people together and boosting morale in rural areas. 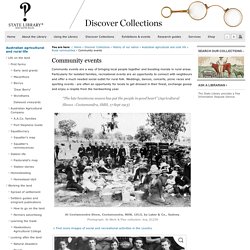 Particularly for isolated families, recreational events are an opportunity to connect with neighbours and offer a much needed social outlet for rural folk. Weddings, dances, concerts, picnic races and sporting events - are often an opportunity for locals to get dressed in their finest, exchange gossip and enjoy a respite from the hardworking year. “The late bounteous season has put the people in good heart” (Agricultural Shows - Cootamundra, SMH, 17 Sept 1913) At Cootamundra Show, Cootamundra, NSW, 1913, by Laker & Co., Sydney.

Photograph. The Primary Industries Education Foundation Australia in conjunction with the Australian Government produced these educational resources for the Agriculture in Education Initiative. 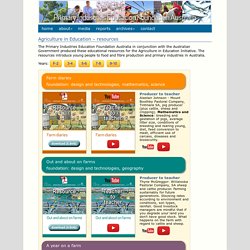 The resources introduce young people to food and fibre production and primary industries in Australia. Farm diaries foundation: design and technologies, mathematics, science Producer to teacher. 1860s Colonial life. A flogging for a pair of boots. Convict life in The Rocks, Sydney. 00:00:11:21RICHARD GLOVER:Are you one of our regular students for Self Improvement Wednesday? 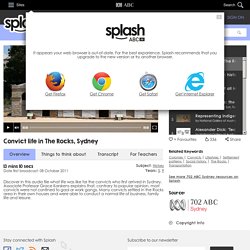 Each week, you get to learn something new and each week, you can test out what you've learnt on our website, where there's already a pop-up test all about today's lesson. Your lesson this week - Convict Secrets of the Rocks. Your teacher is Associate Professor Grace Karskens, Senior Lecturer in Australian History at the University of New South Wales. Grace, good afternoon.00:00:33:17GRACE KARSKENS:Hello, Richard.00:00:34:11RICHARD GLOVER:Could we start about the layout of this area, because people are familiar with these crooked lanes and flights of stairs everywhere.00:00:41:03GRACE KARSKENS:That's one of the nicest things about The Rocks. If people know it at all, those crooked laneways and stairs linking, 'cause it's a very steep area. 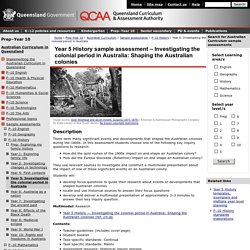 In this assessment students choose one of the following key inquiry questions to research: How did the gold rushes of the 1800s impact on and shape an Australian colony? How did the Eureka Stockade (Rebellion) impact on and shape an Australian colony? They use relevant sources to investigate and construct a multimodal presentation about the impact of one of these significant events on an Australian colony. Students will: develop focus questions to guide their research about events or developments that shaped Australian colonies locate and use historical sources to answer their focus questions develop and deliver a multimodal presentation of approximately 2–3 minutes to answer their key inquiry question. Pilot Guides.com: Short History of Convict Australia - Convict Life.

Convicts in Australia. Key points Convicts arrived in Australia in 1788, on the First Fleet. Many convicts were sentenced to deportation for minor crimes as life became very tough in Great Britain. A day in the life of a convict - Historic Houses Trust of NSW. A convict Story. Our Colonial Past - Yr 5 - Library Pathfinders.