Liberal leadership: the faceless men who stalked Abbott and made Turnbull king. By Monday morning, the numbers remained firmly locked in against Abbott. 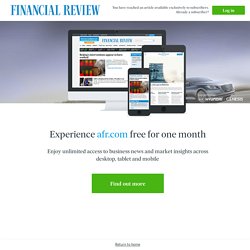 The Prime Minister had no idea, and likely wouldn't have believed it if he had.

John Howard: Labor needs to advocate for reform. John Howard: Why bipartisanship is crucial to economic reform. By John Howard Several hours before Ralph Willis rose to deliver the last budget of the Keating government on the May 9, 1995, Kim Beazley, then finance minister and deputy prime minister, rang me and said: "John, is it still your policy to fully privatise the Commonwealth Bank? 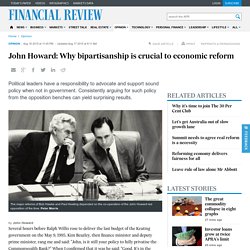 " When I confirmed that it was he said: "Good. Paul Keating: I didn't need the Liberals' help to change Australia. By Paul Keating. 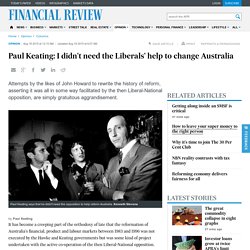 The political leaders we had to have - Jack the Insider Blog. THERE are a number of ways to look at the Newspoll and as usual it depends on whether you’re a glass half full or a glass half empty person. The optimists in the government might conclude Labor’s two-party preferred vote is within the poll’s margin for error (three per cent) of putting them in front while the pessimists will point to Labor consistently trailing the Coalition in the polls over the last four months by an average of six points. Another poll yesterday from online pollster, Essential Report, revealed that neither Gillard nor Abbott were the preferred leaders of their respective parties.

This was jumped on by a number of pundits, including Daily Telegraph journalist, Joe Hildebrand on last night’s Q&A: Joe was a breath of fresh air on the show; funny, witty and not given to partisan barracking. Veni vidi vici Vo Vo*. Why Rudd is a modern day Caesar. When I bring up the subject of Kevin Rudd’s brutal factional knifing, I am often accused of living in the past. Busted: mix up the letters and you get JULIA CAUSE.

Just sayin'... In fact nothing could be further from the truth. For example, let me take you back to 44BC. This was another year when a group of factional powerbrokers decided their personal political interests would be much better served if they too knifed a leader who, despite his widely acknowledged vision and intellect, was criticised as being too imperious and autocratic. The victim’s name, of course, was Gaius Julius Caesar, a man perhaps more pivotal in the spread of Western civilisation - and the extraordinary legal, political and economic benefits that go with it - than any other human being in history. 1. ABC. Sales interviews Paul Keating Australian Broadcasting Corporation Broadcast: 07/11/2011 Reporter: Leigh Sales Leigh Sales interviews Paul Keating. 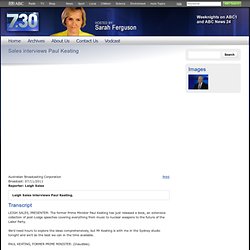 .Paul Howes. War on Terror Redux - 2014. Preferential Voting. Themes. Politics without policy: the age of unbelief - The Drum Opinion - The tussle at the top of the ALP involves almost zero argument about where that party should go. Find More Stories Politics without policy: the age of unbelief Jeff Sparrow The media is fascinated with the contest between Julia Gillard and Kevin Rudd. But a simple question never gets asked: why does it matter? From a certain perspective, the importance of the leadership issue goes without saying. The obvious circularity bothers no-one (or, at least, no-one who matters) partly because, for those with a professional connection to parliamentary politics, there's real and immediate consequences from a shift in the top.

But what about the rest of us? Can anyone answer such questions? New year dawns with blurry vision. Illustration: Matt Golding. THAT genius alcoholic F. Scott Fitzgerald described his generation as one ''dedicated more than the last to the fear of poverty and the worship of success, grown up to find all gods dead … and all faiths to man shaken''. He'd feel right at home in this season of drinking and fuzzy reflection, when the world is bedevilled with crises, and there is no one to look to for reassurance and decisive action.

According to social scientists, Australia's vision of 2012 is not only clouded by fears of financial and environmental collapse, but a lack of belonging and confidence in something to aspire to. Invasion victory ensured by complacency. HELLO infidel Australians. This is a warning from the People's Army of the Glorious Republic of Bernardistan: today we respectfully announce that we intend invading your country. You infidels should be afraid because our Dear Leader has hatched a cunning plan to ensure our success. Using the internet and the 2006 census results, here's what we already know about your godless country. We know that your military strength is at best 50,000 professional soldiers. Using the ratio that the Americans applied to ensure success in Iraq (three coalition personnel per Iraqi soldier) we estimate we will need 150,000 men to seize your (soon to be our) continent. And what's more, we have run a cost-benefit analysis on the project.

Ending Australian autocracy. How The Economy Became This Year's Battleground.