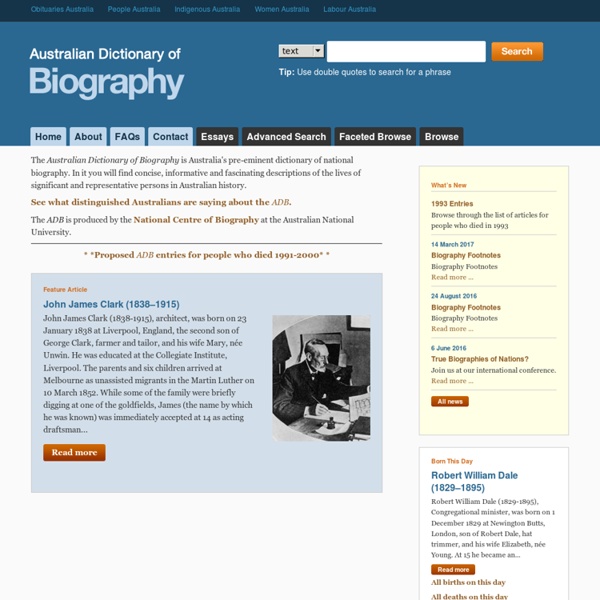 The Australian Dictionary of Biography is Australia's pre-eminent dictionary of national biography. In it you will find concise, informative and fascinating descriptions of the lives of significant and representative persons in Australian history. See what distinguished Australians are saying about the ADB. The ADB is produced by the National Centre of Biography at the Australian National University. * *Proposed ADB entries for people who died 1991-1995* * Feature Article

Australian Olympic Committee: Olympian Search Every Australian Olympian and their Games results can be found here. Simply type in the athlete name and search. For more advanced searches, you can use the drop down boxes to filter by Gender, Medal type, Sport, and Games. Ian Thorpe Ian Thorpe won five Olympic gold medals, the greatest total of any Australian. Australian painters John Glover (1767-1849), Australian landscape with cattle: the artist's property Patterdale, c. 1835, oil on canvas. Image courtesy of the : an2253188. When the first artists arrived in colonial Australia from Europe in the late 18th century, they were confronted by images and scenery the likes of which they had never seen: ...the whole appearance of nature must be striking in the extreme to the adventurer, and at first this will seem to him to be a country of enchantments.Thomas Watling, Letters From An Exile in Botany Bay, To His Aunt in Dumfries, 1794 The traditions of European art and painting did not fit comfortably with this strange and bewildering new landscape.

Why did the great journey's of exploration occur? In this part of your course you are investigating some of the great explorations in world history. During the fifteenth and sixteenth centuries there was a great outbreak of exploration from Europe to unknown areas of the world. Why did this happen? What was it like to be an explorer then, going into the unknown? What were they looking for? 1 Historical background Recognising Aboriginal and Torres Strait Islander Peoples in the Constitution: Report of the Expert Panel Millions of non-indigenous Australians have joined with us in the search for a better relationship based on equity and justice. Australians at every level of our society have put up their hands to be counted as supporters of a nation that holds as its core value a society based on mutual respect, tolerance and justice. ...