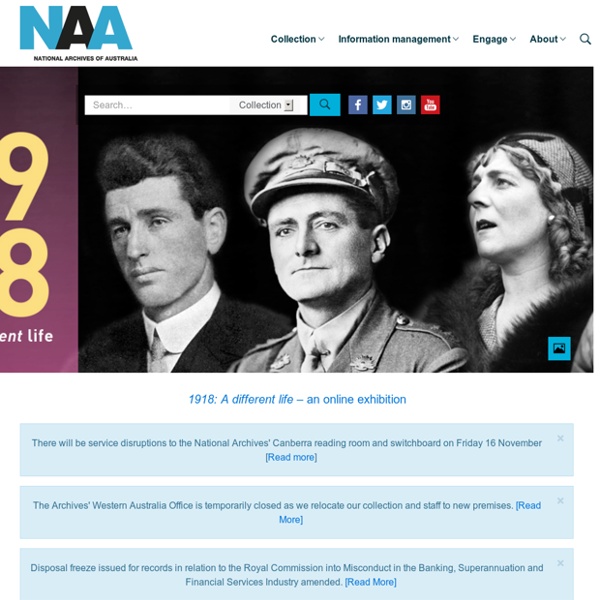 The National Archives of Australia and Ancestry.com.au are working together to offer greater access to the Fremantle Passenger Lists collection. Forced Adoptions History Project website launched for the first anniversary of the National Apology. The National Archives of Australia and UNSW Australia have partnered to make the John Howard collection available to the Australian community. Need proof that you are a descendant of a Gallipoli Anzac? Search our collection. Information: the Currency of the Digital Economy - Earlybird registration extended!

First World War 1914–18 Australian troops in the Lone Pine trenches. A02022 A02022 Australian troops in the Lone Pine trenches. AWM A02022 Australia’s involvement in the First World War began when Britain and Germany went to war on 4 August 1914, and both Prime Minister Joseph Cook and Opposition Leader Andrew Fisher, who were in the midst of an election campaign, pledged full support for Britain. Primary Source Sets Digital Public Library of America (DPLA) Primary Source Sets are designed to help students develop critical thinking skills by exploring topics in history, literature, and culture through primary sources. Drawing online materials from libraries, archives, and museums across the United States, the sets use letters, photographs, posters, oral histories, video clips, sheet music, and more. Each set includes a topic overview, ten to fifteen primary sources, links to related resources, and a teaching guide. These sets were created and reviewed by the teachers on the DPLA's Education Advisory Committee. Read about our education projects, suggest a new topic for a primary source set, and contact us with feedback at education@dp.la.

Bulgaria Coordinates: Bulgaria i/bʌlˈɡɛəriə/ (Bulgarian: България, IPA: [bɐɫˈɡarijɐ]), officially the Republic of Bulgaria (Bulgarian: Република България, IPA: [rɛˈpublikɐ bɐɫˈɡarijɐ]), is a country located in south-eastern Europe. It is bordered by Romania to the north, Serbia and Macedonia to the west, Greece and Turkey to the south, and the Black Sea to the east. Digitised WWI Victorian newspapers A major project commemorating World War I has digitised 216 WWI-era Victorian community newspapers and made them available online via the National Library of Australia’s Trove portal. Victorians everywhere can now explore the stories of their communities and family and friends who lived and fought through the Great War. This digitised collection contains thousands of stories waiting to be found. These newspapers of the day provide, in their original format, news and public debate; letters from soldiers, sailors and nurses; death notices, images and more. The newspapers can be freely and easily searched by anyone at anytime and anywhere, using keywords, dates or geographical regions. Our listings below link directly to digitised newspaper titles across nine Victorian regions.

Moving Image Archive Anime (/ˈænəˌmeɪ/) (Japanese: アニメ) is a style of hand-drawn and computer animation originating in, and commonly associated with, Japan. The word anime is the Japanese term for animation, which means all forms of animated media. Outside Japan, anime refers specifically to animation from Japan or as a Japanese-disseminated animation style often characterized by colorful graphics, vibrant characters and fantastical themes. Sleep Stranger Compassion. This man has it. When Isaac Theil let a sleepy stranger take a little catnap on his shoulder, it was because "I simply remembered the times my own head would bop on someone’s shoulder because I was so tired after a long day," he recounted to Tova Ross of Tablet Magazine. Another subway rider was so struck by Theil's nonchalant empathy that he snapped a picture and put it on Reddit, from which it was then posted to Facebook by Charidy. Redditor Braffination wrote, "Heading home on the Q train yesterday when this young black guy nods off on the shoulder of a Jewish man.

Service records Discovering Anzacs – The National Archives of Australia and Archives New Zealand commemorate the Centenary of Anzac. The National Archives holds records about service in the Australian defence forces from Federation in 1901. Find out how to access the records we hold relating to service with the: Australian Army (Army) Trove - Pictures, photos, objects Search photographs, negatives, artworks, drawings, posters, postcards and other pictures, as well as physical objects such as puzzles, instruments and clothing. Contribute your photos to Trove! Find out how to do it. 1,256 photos have been contributed to Trove via Flickr this month. Trove's Pictures, photos, objects zone owes much of its existence to one of the National Library's first discovery services, Picture Australia.

ed.ted Vladimir Lenin overthrew Russian Czar Nicholas II and founded the Soviet Union, forever changing the course of Russian politics. But was he a hero who toppled an oppressive tyranny or a villain who replaced it with another? Alex Gendler puts this controversial figure on trial, exploring both sides of a nearly century-long debate. Explore stories, films and historical material about the First World War and contribute your own family history.