Growing global e-waste problem reaches new record – News – ABC Environment. Electronic waste, or 'e-waste' is a problem worldwide, with the mountain of material thrown away reaching a new high in 2014. 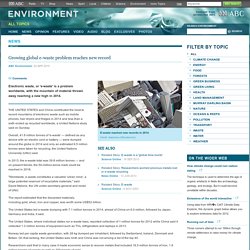 THE UNITED STATES and China contributed the most to record mountains of electronic waste such as mobile phones, hair dryers and fridges in 2014 and less than a sixth ended up recycled worldwide, a United Nations study said on Sunday. Overall, 41.8 million tonnes of 'e-waste' — defined as any device with an electric cord or battery — were dumped around the globe in 2014 and only an estimated 6.5 million tonnes were taken for recycling, the United Nations University (UNU) said. Global-e-waste-systems-A-Report-for-ANZRP-by-EIU-FINAL-WEB.pdf. E-waste. Electronic waste recycling - City of Melbourne. Australians dispose of over 100,000 tonnes of computers, computer equipment and televisions each year – that’s around 5kg per person. 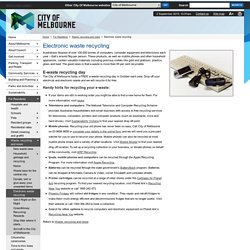 These products, as well as mobile phones and other household appliances, contain valuable materials including precious metals like gold and platinum, plastics, glass and lead. The good news is that e-waste is more than 95 per cent recyclable. Australia E Waste Statistics - PGM Refiners. Australian E-Waste Statistics As one of the world’s top ten consumers of electronic goods, Australians buy more than 4 million computers and 3 million televisions annually, 88% of which end up in landfill where their components can leach dangerous toxins into groundwater and soil, creating severe potential health and environmental hazards over time. 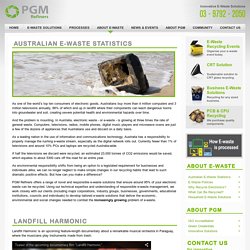 And the problem is mounting. In Australia, electronic waste - or e-waste - is growing at three times the rate of general waste. Computers, televisions, radios, mobile phones, digital music players and microwave ovens are just a few of the dozens of appliances that Australians use and discard on a daily basis. As a leading nation in the use of information and communications technology, Australia has a responsibility to properly manage the rushing e-waste stream, especially as the digital network rolls out. E-waste-factsheet-final.pdf. 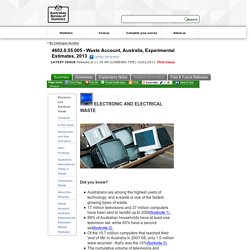 Australians are among the highest users of technology, and e-waste is one of the fastest growing types of waste. 17 million televisions and 37 million computers have been sent to landfill up to 2008(footnote 1) . 99% of Australian households have at least one television set. while 55% have a second set(footnote 2) . Of the 15.7 million computers that reached their 'end of life' in Australia in 2007-08, only 1.5 million were recycled - that's less the 10%(footnote 3) . The cumulative volume of televisions and computers reaching the end of their useful life is expected to reach 181,000 tonnes or 44 million units by 2027-28(footnote 4) .

Australians buy more than 4 million computers and 3 million televisions annually(footnote 5) . Older televisions that contain Cathode Ray Tubes (CRT) have more than 2 kilograms of lead and account for the largest source of lead in the waste stream. National Television and Computer Recycling Scheme - Home Page. The National Television and Computer Recycling Scheme was established in 2011 to provide Australian householders and small business with access to industry-funded collection and recycling services for televisions and computers. 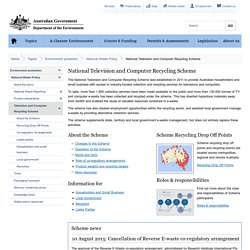 To date, more than 1,800 collection services have been made available to the public and more than 130,000 tonnes of TV and computer e-waste has been collected and recycled under the scheme. This has diverted hazardous materials away from landfill and enabled the reuse of valuable resources contained in e-waste. The scheme has also created employment opportunities within the recycling sector, and assisted local government manage e-waste by providing alternative collection services. E-waste report updated. Australia's National Waste Policy - Key documents and resources. Australia’s E-Waste statistics. As a developed country, Australia’s E-Waste statistics are surprisingly shocking. 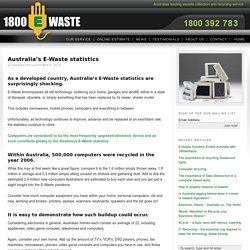 E-Waste encompasses all old technology, cluttering your home, garages and landfill, either in a state of disrepair, obsolete, or simply something that has been replaced by its newer, shinier model. This includes microwaves, mobile phones, computers and everything in between. Unfortunately, as technology continues to improve, advance and be replaced at an exorbitant rate, the statistics continue to climb.

Computers are considered to be the most frequently upgraded electronic device and as such contribute greatly to the disastrous E-Waste statistics. Within Australia, 500,000 computers were recycled in the year 2006. While this may at first seem like a great figure, compare it to the 1.6 million simply thrown away, 1.8 million in storage and 5.3 million simply sitting unused on shelves and gathering dust. It is easy to demonstrate how such buildup could occur. 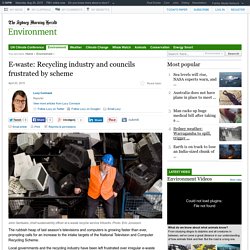 Photo: Erin Jonasson The rubbish heap of last season's televisions and computers is growing faster than ever, prompting calls for an increase to the intake targets of the National Television and Computer Recycling Scheme. Local governments and the recycling industry have been left frustrated over irregular e-waste recycling services, as Australia's electronics continue to end up in landfill. Now in its third year, the scheme requires the television and computer industries to fund the collection and recycling of 35 per cent of waste televisions and computers.

The goal is for television and computer industries to eventually fund the recycling of 80 per cent of their products entering Australia's waste stream every year. However, many councils across Australia have claimed the scheme is over-supplied and the targets do not support the communities' response to recycling e-waste. The Dark Side of the Digital Age: E-Waste  E-Waste via Basal Action Network With the passing of Earth Day, I am left with the usual examination of areas in my life where I could possibly improve and be more eco-friendly. 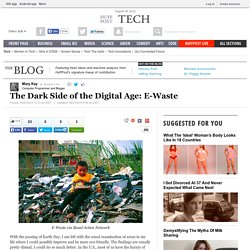 The findings are usually pretty dismal; I could do so much better. In the U.S., most of us have the luxury of not having to face the daily realities of all the damage humans do to the planet. It is hard to understand the devastation we create unless you travel to a developing nation or actively try to find it in our own country -- pictures or words will never do it justice.

I am definitely not well informed on all the issues that face the environment, but when I hear about something new, I try to learn and do better -- such is the case with the issue of e-waste. How to create wealth from waste and reduce our landfill. Not a pile or rubbish but a rich urban mine of recyclable material. 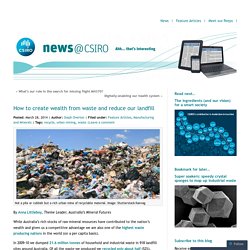 Image: Shutterstock/kanvag By Anna Littleboy, Theme Leader, Australia’s Mineral Futures While Australia’s rich stocks of raw mineral resources have contributed to the nation’s wealth and given us a competitive advantage we are also one of the highest waste producing nations in the world (on a per capita basis).