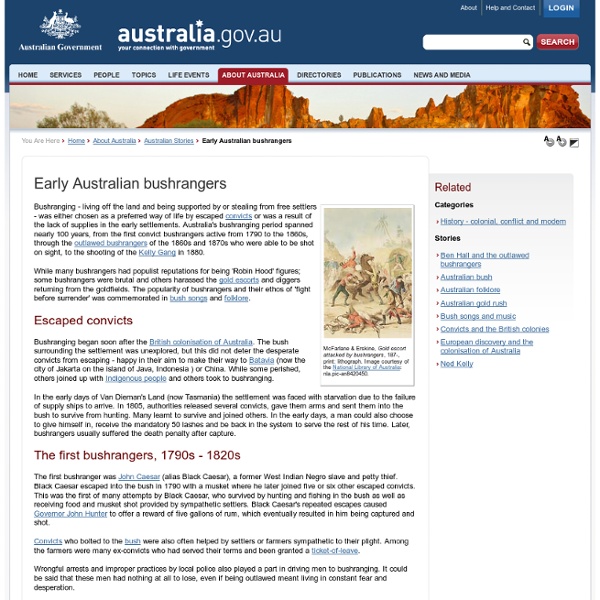 McFarlane & Erskine, Gold escort attacked by bushrangers, 187-, print: lithograph. Image courtesy of the : nla.pic-an8420450. Bushranging - living off the land and being supported by or stealing from free settlers - was either chosen as a preferred way of life by escaped or was a result of the lack of supplies in the early settlements. Australia's bushranging period spanned nearly 100 years, from the first convict bushrangers active from 1790 to the 1860s, through the of the 1860s and 1870s who were able to be shot on sight, to the shooting of the in 1880. While many bushrangers had populist reputations for being 'Robin Hood' figures; some bushrangers were brutal and others harassed the and diggers returning from the goldfields. The popularity of bushrangers and their ethos of 'fight before surrender' was commemorated in and . Escaped convicts Bushranging began soon after the . The first bushrangers, 1790s - 1820s Martin Cash - 'The only bushranger to die in his own bed', 1820 - 1840s 1. 2.

Bushranger History[edit] More than 2000 bushrangers are believed to have roamed the Australian countryside, beginning with the convict bolters and drawing to a close after Ned Kelly's last stand at Glenrowan.[3] 1850s: gold rush era[edit] The bushrangers' heyday was the Gold Rush years of the 1850s and 1860s as the discovery of gold gave bushrangers access to great wealth that was portable and easily converted to cash. Their task was assisted by the isolated location of the goldfields and a police force decimated by troopers abandoning their duties to join the gold rush.[3] George Melville was hanged in front of a large crowd for robbing the McIvor gold escort near Castlemaine in 1853.[3]

Ancient Australian History In the early days of Australia’s history, bushrangers roamed the countryside. They lived by stealing horses, holding up farms and travelers and robbing banks and stores. Many were escaped convicts. Others were just young men looking for adventure and freedom from the boredom of everyday work. Imagine that you were a convict. Perhaps you worked in a government gang. The Australian Bushrangers The Australian Bushrangers Who, What, When, Where Why? The term “Bushranger” has definitely changed over the years. John Dunn (bushranger) Memorial to Nelson at Collector Inscription on memorial to Nelson John Dunn (14 December 1846 – 19 March 1866) was an Australian bushranger. Ben Hall (bushranger) Ben Hall (9 May 1837 – 5 May 1865) was an Australian bushranger of the 19th century. He and his various companions roamed an area of NSW from Bathurst to Forbes, south to Gundagai and east to Goulburn. He was known as "Brave Ben Hall" and has become part of Australian folklore. Ben Hall carried out many audacious raids, some of which were intended to taunt the police.[2] Unlike many bushrangers of the era, he was not directly responsible for any deaths, although several of his companions certainly were [2] He was shot dead by police in May 1865 at the Billabong Creek. The police claimed that they were acting under the protection of the Felons Apprehension Act 1865 which allowed any bushrangers who had been specifically named in under the terms of the Act to be shot and killed by anyone at any time without warning.

Untitled Document Out of convenience, or to pursue a political agenda, the British colonisation of Australia is often termed a "white settlement" or a "white invasion." Such terms are inaccurate considering that Convicts of African extraction walked among those of British extraction (and Convicts of Greek, Italian, French and Indian extraction). Although their numbers were small, they had a level of influence that vastly exceeded their small numerical status, and so ensured that the colonial experience had a definitive shade of colour. These black Convicts included Billy Blue; the operator of a ferry service between Nth Sydney and Circular Quay. Aside from providing a valued service to the colony, Billy's eccentric nature helped him attain the status of what could be defined as Australia’s first celebrity.

Ben Hall Ben Hall (1837-1865), bushranger, is believed to have been born on 9 May 1837 at Maitland, New South Wales, son of Benjamin Hall and his wife Elizabeth; both parents were ex-convicts. He became a stockman and with John Macguire leased a run, Sandy Creek, near Wheogo. On 29 February 1856 at Bathurst he married according to Roman Catholic rites Bridget Walsh of Wheogo. Her sister became Frank Gardiner's mistress. Australian gold rush timeline, HSIE, Discovering gold, Gold! Year 6, NSW The first major mineral discovery - gold - was a watershed (a turning point or landmark) for Australian society. The initial stages of the gold rush were responsible for tremendous changes in the community, bringing Australia's first great waves of immigration from countries other than England and Ireland. Ambitious prospectors from Asia, Europe and America made the trek to the goldfields of Ballarat and Bendigo in Victoria, and Bathurst in New South Wales, in the hope of striking it rich.