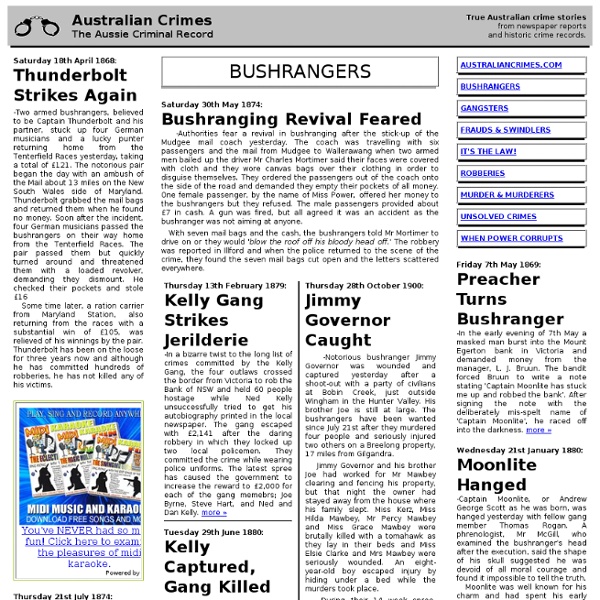 Whereas, the abovenamed convict, who effected his escape from the Penal Establishment, Cockatoo Island, on the 11th of September, 1863, is still at large, and is further charged with the commission of other crimes: Notice is hereby given that an increased reward of £200 will be paid by the Government for the apprehension of the abovenamed offender, or, if effected upon information received, then one half the reward to the person giving such information, and the other moiety to the person or persons effecting the capture; and, further, that the Government will pay a reward of £50, to be similarly divided, for the apprehension of any accomplice of the said Frederick Ward, arrested in his company, or associated with him in the commission of crime. The above reward to be in lieu of all other rewards payable by the government under previous notice for the apprehension or conviction of this offender.

Captain Thunderbolt - Tocal's bushranger Thunderbolt's Cottage Fred Ward worked at Tocal before becoming the notorious bushranger Captain Thunderbolt. Fred was the youngest of 11 children of Michael and Sophia Ward. The Australian Bushrangers The Australian Bushrangers Who, What, When, Where Why? The term “Bushranger” has definitely changed over the years. In the very early years, it simply referred to good bush men who possessed the horsemanship, hunting, and survival skills needed for living in the Australian bush, or wild, after they fled Australia’s prison colonies. Captain Thunderbolt - Tocal's bushranger Thunderbolt didn't kill anyone Thunderbolt was involved in several shootouts with police, so the fact that he never killed anyone may have been luck, but it added weight to the belief that Thunderbolt was the Gentleman Bushranger, the last of the professional highwaymen. This reputation was earnt by not harming women, often giving some money back, and shouting for everyone at pubs using stolen money.

Ben Hall (bushranger) Ben Hall (9 May 1837 – 5 May 1865) was an Australian bushranger of the 19th century. He and his various companions roamed an area of NSW from Bathurst to Forbes, south to Gundagai and east to Goulburn. He was known as "Brave Ben Hall" and has become part of Australian folklore. Ben Hall carried out many audacious raids, some of which were intended to taunt the police.[2] Unlike many bushrangers of the era, he was not directly responsible for any deaths, although several of his companions certainly were [2] He was shot dead by police in May 1865 at the Billabong Creek. The police claimed that they were acting under the protection of the Felons Apprehension Act 1865 which allowed any bushrangers who had been specifically named in under the terms of the Act to be shot and killed by anyone at any time without warning. Unfortunately, at the time of Hall's death, the Felons Act had not come into force, resulting in considerable controversy over the legality his killing.[3]

Frederick (Captain Thunderbolt) Ward Frederick Ward (1835-1870), bushranger, alias 'Captain Thunderbolt', was born at Windsor, New South Wales. He was working as a drover and horse-breaker at Tocal station on the Paterson River when arrested with James Garbutt and indicted for stealing and receiving seventy-five horses at Maitland on 21 April 1856; Ward was sentenced to ten years' hard labour on 13 August on the receiving charge. Released conditionally from Cockatoo Island late in July 1860, Ward worked as a horse-breaker at Cooyal near Mudgee until his ticket-of-leave was cancelled on 17 September 1861 for 'absence from Muster' and he was tried on 3 October for horse-stealing. Returned to Cockatoo Island to complete his original sentence with an additional three years, Ward escaped with Frederick Brittain about 11 September 1863. in 1864-65 Ward lived quietly with his 'wife', Mary Ann, née Bugg, a half-caste Aboriginal, on the Culgoa River near Bourke with two children. Citation details