Fiction: When She Came Walking, by Tim Jones. 24 September 2001 The first time she walked down our street, pots jumped off stoves, coal leapt from scuttles, wood went rat-a-tat-tatting down hallways. 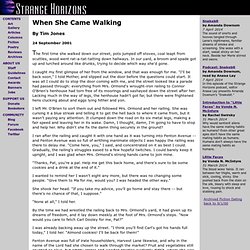 In our yard, a broom and spade got up and lurched around like drunks, trying to decide which way she'd gone. I caught my first glimpse of her from the window, and that was enough for me. Tim Jones. Turbine Turbine is an online literary journal published annually since 2001 by the International Institute of Modern Letters. 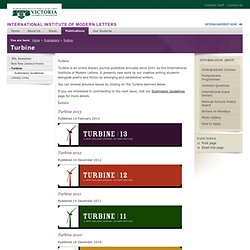 It presents new work by our creative writing students alongside poetry and fiction by emerging and established writers. You can browse previous issues by clicking on the Turbine banners below. If you are interested in contributing to the next issue, visit our Submission Guidelines page for more details. Margaret Drabble reads 'The Doll's House' by Katherine Mansfield. Drabble on Mansfield I first read "The Doll's House" in one of those big children's annuals that we were given every Christmas, where this classic story took its place among puzzles, Christmas games and jolly messages from Enid Blyton. 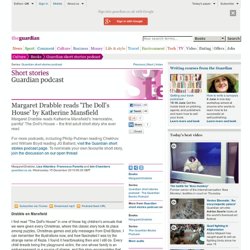 I can remember the illustrations now, and how fascinated I was by the strange name of Kezia. I found it heartbreaking then and I still do. Every child dreads being the playground victim, the one whose family is an embarrassment or a source of shame, and this story encapsulates that sense of exclusion. In true Mansfield style, it is at once pathetic (in the true sense) and slightly sadistic. 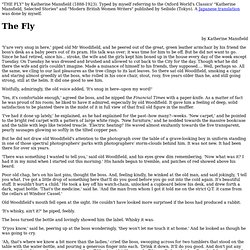 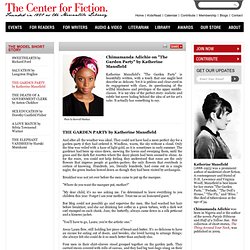 Yet it is pitiless and clear-eyed in its engagement with class, its questioning of the willful blindness and privileges of the upper middle-classes. It is my idea of the perfect story: realistic and subtle but never hiding behind the idea of art for art's sake. The Turning. The Turning photo by David Frankel by Kath Mckay Tim Winton is an author who gets down in the dust of humanity. 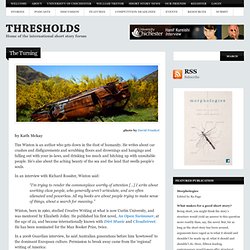 Cate is highly regarded as a teacher of short fiction and works as a mentor, editor and judge when not at work on her own writing. To celebrate the release of The Best Australian Stories 2010, Cate shares her Top 10 Tips for Writers. Booktopia Presents: Like a House on Fire by Cate Kennedy (Interview with Caroline Baum) The Stella Interview: Cate Kennedy - The Stella Prize. Renovators-heaven.pdf. Black Ice. When I went up to check my traps, I saw that the porch lights at the lady’s place were still on, even though it was morning. 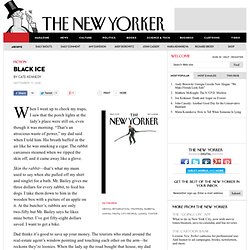 “That’s an atrocious waste of power,” my dad said when I told him. His breath huffed in the air like he was smoking a cigar. The rabbit carcasses steamed when we ripped the skin off, and it came away like a glove. Skin the rabbit—that’s what my mum used to say when she pulled off my shirt and singlet for a bath. Mr. Happy Antipodean. Review: Dark Roots, Cate Kennedy (2006) Cate Kennedy writes deftly. 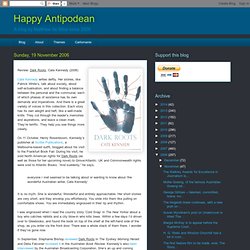 Her stories, like Patrick White’s, talk about society, about self-actualisation, and about finding a balance between the personal and the communal, each of which phases of existence has its own demands and imperatives. Cate Kennedy. “Mum says you better get inside right now.” 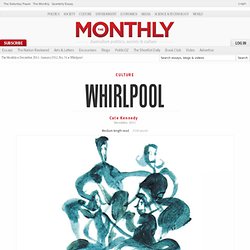 Louise is already getting ready for the photo: she has one big hot-roller pinned to the top of her head and two small ones at each side, and she’s applied the skin-tinted Clearasil to the faint outbreaks on her forehead and chin. The cream is not the colour of skin but the strange pink-orange of a bandaid, or a doll. “She says you have to come right now or you’re going to be in big trouble.” Louise’s ridiculous hair-roller, like a poodle’s flopping topknot, makes you less afraid. Jennifer mills » podcast feed by Jennifer Mills. Spineless Wonders Asks Jennifer Mills. Jennifer Mills 1. Who are the short fiction authors you admire (Australian or otherwise, alive or dead)? Writing — Jessica White. ‘I love Ewan McGregor!’ Hannah cried as the Elephant Love Medley from Moulin Rouge began. ‘I wish he’d leave his wife and marry me!’ The Sea Lovers — Jessica White.

‘I love Ewan McGregor!’ Hannah cried as the Elephant Love Medley from Moulin Rouge began. ‘I wish he’d leave his wife and marry me!’ A Mercurial Man — Jessica White. I thought it might have been the mercury that sent our father mad, but Luke, his grimy finger pointing to the entry in the encyclopaedia, insisted that it couldn't have been. “Symptoms of mercury poisoning include sensory impairment, disturbed sensation and a lack of coordination,” he read in his clear, loud voice. “He couldn't have hit mum if he was uncoordinated.” The Country of Boats — Jessica White. She left because the seas were getting colder and she’d heard of mermaids becoming trapped in ice and frozen over.

She had never liked the cold and didn’t want to drown, so she decided to travel south, where it was warmer. Her family thought she was mad, but then, they always had. ‘Odd’ was what they called her, or ‘singular.’ They thought she spent too much time exploring and not enough time sitting on rocks brushing her hair.