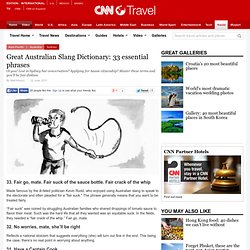 Fair go, mate. Fair suck of the sauce bottle. Fair crack of the whip Made famous by the ill-fated politician Kevin Rudd, who enjoyed using Australian slang to speak to the electorate and often pleaded for a "fair suck. " The phrase generally means that you want to be treated fairly. “Fair suck” was coined by struggling Australian families who shared droppings of tomato sauce to flavor their meat. 32. Reflects a national stoicism that suggests everything (she) will turn out fine in the end. 31. A look, a brief inspection. 30. John Dory is found in Sydney Harbour and it’s great grilled with lemon and pepper, or deep-fried. 29. A six-pack has evolved to mean anyone with fit abdomens, but long ago the six-pack was (and still is) a group of beers. 28. 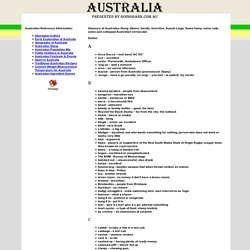 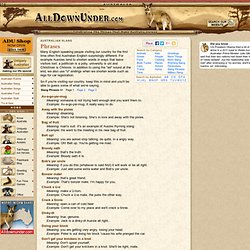 For example Aussies tend to shorten words in ways that leave visitors lost: a politician is a polly, university is uni and Christmas is Chrissie. In addition to using the "ee" sound at the end, we also use "o" endings when we shorten words such as rego for car registration. So if you're visiting our country, keep this in mind and you'll be able to guess some of what we're saying. Slang Phrases >> Page 1 Page 2 Page 3 Av-a-go-yer-mug Meaning: someone is not trying hard enough and you want them to.Example: Av-a-go-yer-mug. Away with the pixies Meaning: dreaming.Example: She's not listening. Bag of fruit Meaning: man's suit. Belt up! Meaning: you are asked stop talking, be quite, in a angry way.Example: Oh! Bloody oath Meaning: that's the truthExample: Bloody oath it is. Bob's yer uncle Bonzer mate! Meaning: that's great friend.Example: That's bonzer mate.