Climate Change in Australia. AR5 SYR FINAL All Topics. Two charts that show how Australia's climate is changing. As Fairfax reported, new research by the ARC Centre of Climate System Science shows how days of heat extreme heat since 2000 now outnumber cold ones by a ratio of 12 to one. 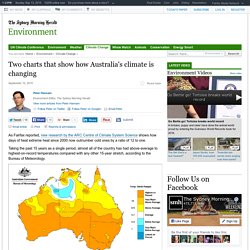 Taking the past 15 years as a single period, almost all of the country has had above-average to highest-on-record temperatures compared with any other 15-year stretch, according to the Bureau of Meteorology. The rainfall over the 2000-14 period helps to explain why much of the Northern Territory missed out on the warmer temperatures. As shown below, the middle third of Australia - where relatively few people live - has been wetter than most other rolling 15-year periods: Department of the Environment, Australian Government. It's Official: Australian Carbon Tax Scrapped. The Australian carbon tax scrapped: the carbon tax was repealed in Canberra this morning after Prime Minister Tony Abbott and the Coalition government managed to procure enough votes to push the repeal through the Senate. 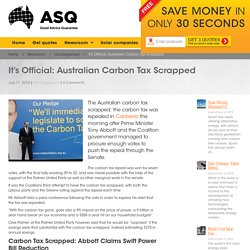 The carbon tax repeal was won by seven votes, with the final tally reading 39 to 32, and was made possible with the help of the support of the Palmer United Party as well as other marginal seats in the senate. It was the Coalitions third attempt to have the carbon tax scrapped, with both the Labour party and the Greens voting against the repeal each time. 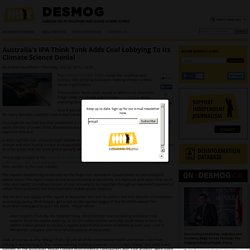 The so-called “think tank”, based in Melbourne, promotes fringe views on climate science from non-experts while attacking renewable energy. Now if you were a coal company, you’d be concerned how for many decades scientists have linked the burning of your product to climate change. You might be worried too that investment in renewable energy is going through the roof while the cost of power from aforementioned renewables is going in the opposite direction. A short-sighted coal company might decide to start launching critiques of the science of climate change and start having a crack at renewables while at the same time selling its product as some sort of silver bullet that can solve global poverty with a single well-aimed shot. The report’s headline figure focuses on the huge coal reserves in Queensland’s as-yet-untapped Galilee Basin. 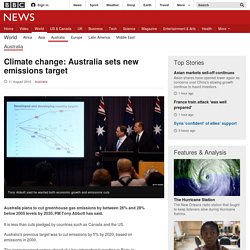 It is less than cuts pledged by countries such as Canada and the US. Australia's previous target was to cut emissions by 5% by 2020, based on emissions in 2000. Climate change and variability. The period from 11 to 17 July 2015 saw a sequence of strong cold fronts affect eastern Australia. 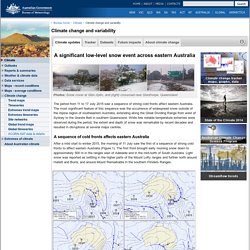 The most significant feature of this sequence was the occurrence of widespread snow outside of the Alpine region of southeastern Australia, extending along the Great Dividing Range from west of Sydney to the Granite Belt in southern Queensland. While few notable temperature extremes were observed during the period, the extent and depth of snow was remarkable by recent decades and resulted in disruptions at several major centres. A sequence of cold fronts affects eastern Australia After a mild start to winter 2015, the morning of 11 July saw the first of a sequence of strong cold fronts to affect eastern Australia (Figure 1). The first front brought early morning snow down to approximately 500 m in the ranges east of Adelaide and in the mid-north of South Australia.