The Eureka Stockade - History (5) Teacher Home Page - FUSE - Department of Education & Training. Australian Explorers and Exploration. Home Search Site Contact Us Site Map Our FREE ebooks Help to download and convert files on this site Project Gutenberg Australia gratefully acknowledges the significant contribution of Sue Asscher in preparing many of the eBooks relating to Australian Explorers, which are available from this page. 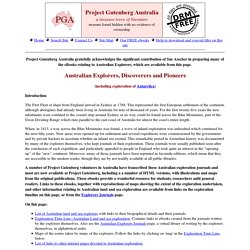 Australian Explorers, Discoverers and Pioneers (including exploration of Antarctica) Introduction The First Fleet of ships from England arrived in Sydney in 1788. When, in 1813, a way across the Blue Mountains was found, a wave of inland exploration was unleashed which continued for the next fifty years. A number of Project Gutenberg volunteers in Australia have transcribed these Australian exploration journals and most are now available at Project Gutenberg, including a a number of HTML versions, with illustrations and maps from the original publications. On this page: List of Australian land and sea explorers with links to their biographical details and their journals. 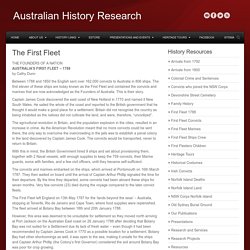 The first eleven of these ships are today known as the First Fleet and contained the convicts and marines that are now acknowledged as the Founders of Australia. This is their story. Captain James Cook discovered the east coast of New Holland in 1770 and named it New South Wales. He sailed the whole of the coast and reported to the British government that he thought it would make a good place for a settlement. The agricultural revolution in Britain, and the population explosion in the cities, resulted in an increase in crime. With this in mind, the British Government hired 9 ships and set about provisioning them, together with 2 Naval vessels, with enough supplies to keep the 759 convicts, their Marine guards, some with families, and a few civil officers, until they became self-sufficient. Shelter was also a problem. Further Readings. Digital Collections - Pictures - Raper, George, 1769-1796. The Ducie collection of First Fleet art [picture] Australian History - The Hidden Story of Australia's Missing Links.

Convicts Transported to Australia: A Guide to Researching Your Convict Ancestors. Australia's First Fleet. The First Fleet. Over 252 days, the First Fleet brought over 1500 men, women and children half way around the world from England to New South Wales. 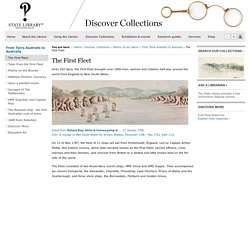 Detail from Botany Bay; Sirius & Convoy going in ... 21 January 1788.from 'A Voyage to New South Wales' by William Bradley, December 1786 - May 1792, Safe 1/14 On 13 of May 1787, the fleet of 11 ships set sail from Portsmouth, England. Digital Collections - Maps - Fowkes, Francis. Sketch & description of the settlement at Sydney Cove Port Jackson in the County of Cumberland taken by a transported convict on the 16th of April, 1788, which was not quite 3 months after Commodore Phillips's. 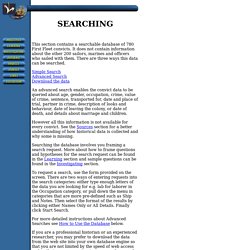 It does not contain information about the other 200 sailors, marines and officers who sailed with them. There are three ways this data can be searched. Simple SearchAdvanced SearchDownload the data An advanced search enables the convict data to be queried about age, gender, occupation, crime, value of crime, sentence, transported for, date and place of trial, partner in crime, description of looks and behaviour, date of leaving the colony, or date of death, and details about marriage and children. However all this information is not available for every convict. Searching the database involves you framing a search request. 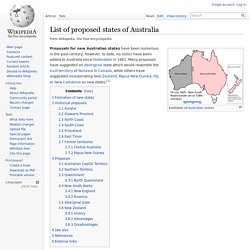 Many proposals have suggested an Aboriginal state which would resemble the Inuit territory of Nunavut in Canada, while others have suggested incorporating New Zealand, Papua New Guinea, Fiji, or New Caledonia as new states.[1] Formation of new states[edit] Chapter VI of the Constitution of Australia allows for the establishment or admission of new states to the Federation. It may also increase, diminish, or otherwise alter the limits of a state, form new states by separating territory from an existing state, or join two states or parts of states, but in each case it must have the approval of the parliaments of the states in question.[2] Historical proposals[edit] This map shows a proposal for subdivisions of Australia from 1838.

There were proposals for new colonies in the 19th century that did not come about. Auralia[edit]